Who is Doc Rivers?

Doc Rivers is a former basketball player from America. He is currently associated with the team “Los Angeles Clippers” as the head coach. Doc started his career in basketball from the team “Atlanta Hawks” in 1983. He was on the team for thirteen years. Doc began his coaching career with the group “Orlando Magic” in 1999.

Doc Rivers succeeded in receiving a lot of honors for his amazing career as a player and coach. The assistant coach of “Marquette University” gave his nickname “Doc.” He had an amazing job both as a player and a coach. Doc even suffered from “Deficit Hyperactivity Disorder.” It was diagnosed during his coaching time in the “Celtics.” 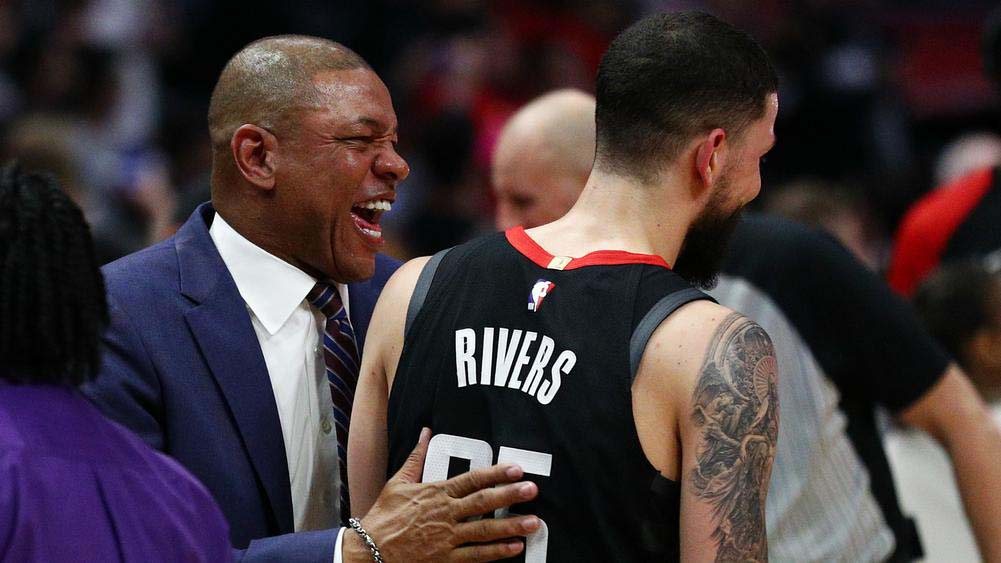 
The birthplace of Doc Rivers is Chicago, Illinois, US. He came into the world on 13th October 1961. His father’s name is Grady Rivers. His mother’s name is Betty Rivers. Doc has a younger brother Grady Rivers Jr. Doc came from a family with a sports background. Doc Rivers spent most of his childhood in Maywood, in Proviso Township. Doc Rivers grew up watching players playing in the Chicago Stadium. Doc had credited his observations and love of mom and dad as the secret of his successful playing career.

Doc Rivers attended the high school in “Proviso East.” He attended the college in “Marquette.” He received his pet name “Doc” during his college days as he used to wear an old “Dr. J” t-shirt. He used to wear it to give tribute to the “NBA: Star Julius Erving. Doc represented the USA’s national team in the “FIBA World Championship” in 1982. His team succeeded in winning the “silver medal” in the tournament.

Although Doc Rivers was not able to score in the last shot of the match, he was the main reason behind his team’s success. His average point was 13.9 and assists of 4.6 during his three years in “Marquette.” Doc completed his graduation in “Political Science” in 1985.

Doc Rivers started his professional journey from the team “Atlanta Hawks” in 1983. He used to play from the position of the “point guard.” Doc actively played for the team in a total of eight seasons. His score during that time was 3,886, and he led the team in assists. Then, Doc Rivers played for the team “Los Angeles Clippers” for a single season. Doc became part of the group “New York Knicks” between 1992 and 1994. His last team as a player was in the team “San Antonia Spurs” in 1996. His average point was 10.9, rebounds of 3, and assists of 5.7.

Moreover, Doc Rivers started his professional life as a coach for the team ‘Orlando magic” in 1999. He was in the post for more than four seasons in “NBA.” He succeeded in taking the team to the record of “41-41.” Doc won the “Coach of the Year” in 2000, which helped the team enter the “playoff.” The team fired him after the team lost ten matches in a row in 2003. But it was Doc’s request to the management to fire him from the post or make him resign from the position. He started working as a commentator for the “NBA” in channel “ABC” in 2004.

Doc Rivers worked in the position for one year. The “Boston Celtics” hired him as the head coach in 2005. But he had to receive a lot of criticism for his coaching techniques. Doc Rivers remained silent and made the mouth shut of everyone in the season three for the team. His team succeeded in winning the match against the team “Los Angeles Lakers.” The team even won the match against “New York Knicks” in 2008.

The same year, the team “East” selected him as a coach for the “NBA All-Star Game” in 2008. As things started disturbing his mental peace, he decided to refresh his mind along with his family.

Doc Rivers came back in the coaching scene in the “2010-11 season.” Doc extended his contract for another five years with the team. It was a deal of $35,000,000. He joined the team “Los Angeles Clippers” for a period of three years in 2013. Then, he became the president of the “Basketball Association.” Doc succeeded in making the team win a total of 57 matches and one “Division” title.

Doc Rivers was not able to enjoy the coaching period after the leaked voice recording of the team’s owner. The recording was full of racist comments. This resulted in silent protests for a long period of time. He continued his journey as the coach of the team till 2017. Doc also completed his journey as the president of the “Basketball Association” till 2017. He extended his contract as a coach in 2018.

Doc Rivers tied knots with Kristen Rivers. The couple is blessed with four children. All of the children are actively involved in the sports fraternity.


Doc Rivers is not very much active on social media platforms. He goes with the name of “doc rivers” on Twitter with 59.5K followers. Doc is not active on Facebook and Twitter. Although if you search his name on Instagram and Facebook, you will encounter a few unverified accounts and fan-made pages. He is from the time when his coaching skills used to create headlines than a  social media post.

Doc Rivers has been part of the sports fraternity for more than thirty-five years. He has succeeded in making many teams changed their gameplay and achieved a lot of tournaments and honors. According to celebriynetworth.net, he has an approximate net worth of $50 million.


The full name of Doc is Glenn Anton Rivers. His current age is 59 years. The nationality of Doc is American. He has an attractive height of 6 feet 4 inches along with a complimentary weight of 95 kgs. Doc belongs to the black ethnicity.