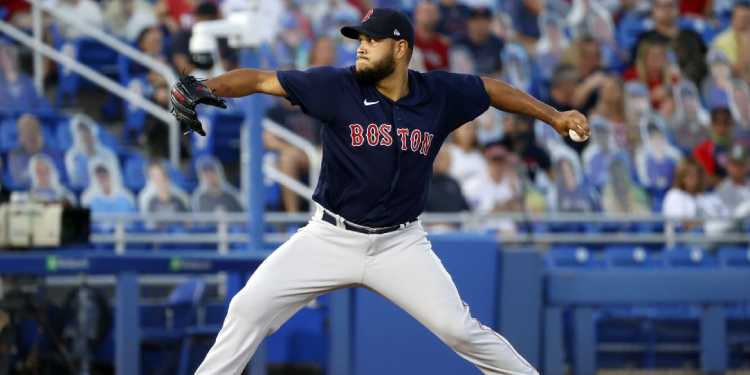 Eduardo Rodriguez is a well-known professional baseball player from Venezuela. He has been a pitcher for the Boston Red Sox in Major League Baseball. Eduardo is a left-handed pitcher and batter. In 2018, Rodriguez was a member of the World Series title team. Since Billy Rohr in 1967, he is the youngest Red Sox pitcher to win his first start on the road.

His father is a construction worker. Eduardo does not originate from a well-known family, hence little information about his parents is available. Eduardo’s nationality, as well as ethnicity, is Venezuelan.

Eduardo Rodriguez is a pretty tall guy standing at the height of 6 feet 2 inches or 1.87 m tall and weighing 100 kg or 220 lbs. Likewise, Eduardo has dark hair and the color of his eyes is black as well.

Eduardo Rodiguez is married to Catherine Rodriguez, his longtime girlfriend. In front of their parents and a few close friends, the couple tied the knot in 2012.

Prior to their marriage, they had been dating for a while. The couple welcomed their first child, a daughter named Annie, shortly after their wedding.

Eduardo revealed that he and his wife are expecting their second kid in early 2017. With the arrival of Ian Rodriguez in April, the family of three became a family of four. Eduardo, his wife, and their children are living a happy married life.

Eduardo spent four more seasons in the minor league. In Boston’s 5–1 victory over the Texas Rangers, he made his MLB debut, pitching 7+23 shutout innings.

Rodriguez made his road debut for the Red Sox as the team’s youngest pitcher. In 121+23 innings pitched, the Venezuelan pitcher went 10–6 with a 3.85 ERA, striking out 98 and walking 37 batters.

Rodriguez had his ups and downs in 2018. He was a member of the World Championship-winning team at the end of the season. Eduardo played in a total of 34 games during the 2019 season.

Eduardo Rodriguez’s net worth is estimated to be $11 million of dollars. He has amassed the majority of his net worth as a result of his MLB salary and contract.

For full biography about your favorite MLB player, please check out Sportscovering.