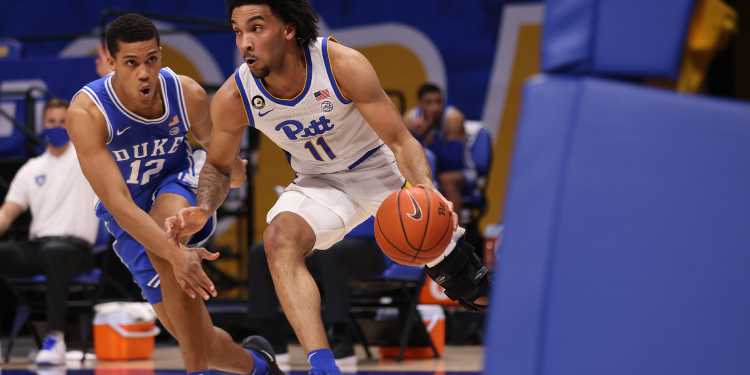 Justin Champagnie is an up-and-coming basketball player from the United States. He played college basketball for the Pittsburgh Panthers of the Atlantic Coast Conference. For his squad, Justin is a Shooting Guard/Small Forward. In 2021, Justin was named to the All-ACC First Team.

Justin Champagnie was born Justin John Champagnie in Staten Island, New York, on June 29, 2001. Ranford Champagnie and his wife Christina Champagnie have three children together. Julian and Jaylen are his two brothers. Julian, his twin brother, is a sophomore basketball player for St. John’s.

His dad was the head men’s soccer coach at Baruch College from 2004 to 2014. He played in college soccer at St. John’s and aided the team wins the 1996 National Championship. Justin went to the University of Pittsburgh after graduating from Bishop Loughlin High School.

Justin Champagnie is a tall guy with an athletic body. Champagnie stands tall at the height of 6 feet 6 inches or 1.98 m and weighs 93kg. Similarly, Justin has black hair, and the color of his eyes is also dark.

When it comes to Justin’s personal life, he has never spoken publicly about his love life. However, Justin is a frequent social media user, with photographs of his family and friends littering his page. As of the present, we may assume Champagnie is single in May 2021.

Justin Champagnie has been playing basketball since he was a child. He was a member of the basketball squad in his high school. Justin attributes his basketball prowess to his father.

Champagnie was named first-team Class AA All-State after averaging 19.8 points per game. When Justin graduated from high school, he was a three-star recruit.

After graduating from high school, Champagnie received multiple offers from several universities. Still, he chose to play for the University of Pittsburgh over Cincinnati, Dayton, Seton Hall, Rutgers, and other schools.

Champagnie played basketball for the University’s men’s squad. He averaged 12.7 points and 7.0 rebounds per game for the Panthers.

After averaging 25.0 points and 10.0 rebounds in games against Notre Dame and Georgia Tech, Justin was named the CBS Sports/USBWA National Freshman of the Week and the ACC Freshman.

Justin was declared out for at least six weeks at the end of his sophomore year after suffering a knee injury during practice.

Justin appeared in twenty games, nineteen of which he started. The athlete finished the season with 11.1 rebounds, 1.6 assists, 1.2 steals, and 18.0 points per game on average. Champagnie declared for the NBA draft in 2021 after finishing his second year.

Champagnie is still in the early stages of his profession. Universities do not pay their players to represent their teams, according to ACC guidelines. As a result, they feel that there are no jobs for collegiate players.

Instead, they are eligible for full scholarships. Champagnie has declared for the NBA draft in 2021. NBA players earn an average of $7 million each year. Therefore, his net worth is being assessed as of 2021.