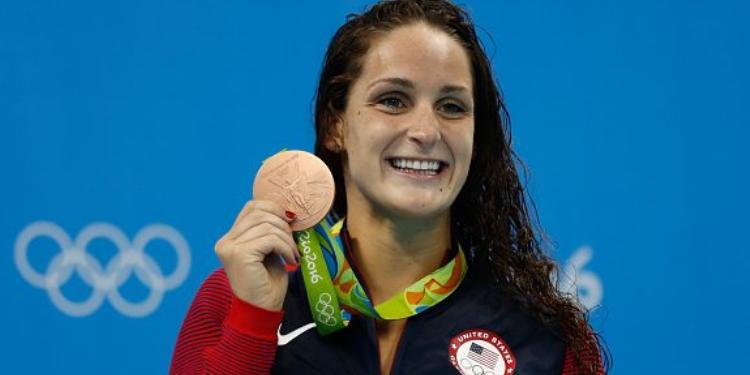 Leah Smith is a professional American freestyle swimmer who has won a gold medal in the 2016 Rio Olympic in 4x200m and a bronze medal in 400m freestyle. She has gained quite fame in several championships leaving behind popular swimmers in both national and world championships.

The swimming skills and technique of Smith are different from other swimmers that making her a successful freestyle swimmer in the world. You know when a person puts his full dedication and effort into something then success will come after them. That’s the story behind Leah Smith and her overall swimming career.

Smith is a daughter of Dan Smith (Father) and Margee Smith (Mother). Besides, she is also a granddaughter of Jimmy Smith who is a famous World Series Champion baseball player. In addition, Smith is also a niece of a popular boxer Billy Conn who earned quite a fame in his boxing career.

Furthermore, Smith went to the Oakland Catholic High School on where she studied for a year and finally graduated. After that, she attends the University of Virginia from where she began to commit to swimming. During that time, she used to practice a lot in order to improve her swimming skills and to be the best swimmer in the future.

Finally, she graduated from her University with a B.A degree in 2017. At that time, she already gained tons of good skills and techniques in swimming.

Leah Smith started her swimming career after joining the University of Virginia. She used to participate in various college swimming and diving events with her team as well as solo.

After years of practice, Smith first competed in the 2014 Pan Pacific Swimming Championships and wins her first-ever gold medal in a 4x200m freestyle relay. It was the biggest moment of her life to win such an international swimming event.

Besides, Smith didn’t sit quite after winning on Pan Pacific; she again participates in the 2015 World Aquatics Championships and again picked a gold medal at 4x200m freestyle swimming. Following the same year, she again continues to participate in the 2015 FINA World Championships representing the USA. She manages to finish second and help the whole team to pick a gold medal.

Smith Olympic journey has been hectic as well as beautiful. After winning an event in the 2015 Aquatics Championships, she went for the 2016 Summer Olympic trials.  She manages to finish in the second position in the 400m freestyle event and 800m freestyle.

The result wasn’t so satisfactory for her to qualify in the 2016 Rio Olympic game because of 2nd position. Luckily, at that time, there wasn’t any top swimmer in the United States so, she was qualified for the coming Rio Olympic event.

So, Smith competes in the 2016 Summer Rio Olympic and finishes in 2nd in the 400m freestyle event, and wins the bronze medal after Jazmin Carling (secured 1st position). After that, she went for the 4x 200m freestyle relay and sins the gold medal in Rio Olympics.

Despite her dedication and hard work, Smith couldn’t make it to the 2020 Tokyo Olympics.

Leah Smith didn’t have a past history of her relationship. So, we can assume that she is single and focusing on her swimming career.

Leah Smith is a successful swimmer in the world. She has earned tons of fortune in her swimming career. Her net worth is estimated around at $1.5 million.