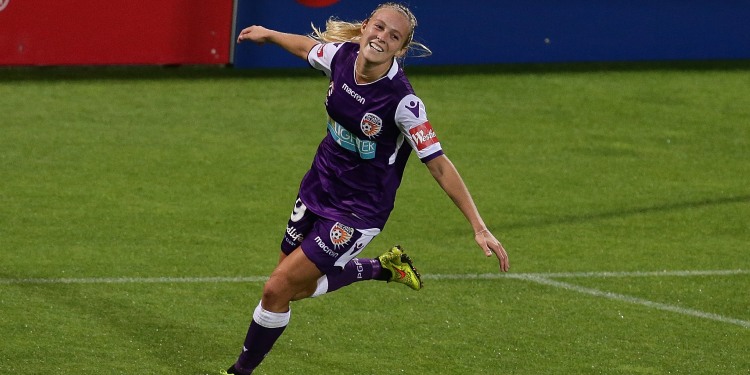 Rachel Morgan Hill, commonly known as Rachel Hill, is an American Professional Soccer player. She plays forward for the Chicago Red Stars of the National Women’s Soccer League (NWSL). After playing for the University of Connecticut Huskies, she became a two-time semi-finalist for the MAC Hermann Trophy.

Hill has been representing and playing for the Australian Football League, Perth Glory on loan for the 2018-19 season since October 19, 2017. Hill is listed as the most popular Association Football Player.

Rachel Morgan Hill was born on April 17, 1995, in Rollinsford, New Hampshire. Hill is the daughter of Mike. She has two brothers – Zach Hill and Jake Hill – with whom she played indoor soccer, coached by their father. In addition, her father guided her in football. However, she acknowledges her father being her most significant source of motivation.

At age 4, Hill started playing youth soccer with ROSO S.C. – Rollinsford Somersworth Soccer Club. She played with ROSO until age 14. Before playing football in college, she played soccer with Seacoast United. Hill won the Super Y-League national championships in 2009 and 2011. In 2013, she joined the University of Connecticut and played soccer representing the university, where she became a two-time semi-finalist for the MAC Hermann Trophy.

In 2015, she was a 1st Team NSCAA All-American. The following year, she was a 2nd team All-American. She ranked second all-time in career goals after scoring 61 goals in 89 collegiate appearances. In 2014 and 2015, Hill was named the American Athletic Conference Offensive Player and Midfielder of 2016.

In the 2017 NWSL College Draft, Portland Thorns FC selected Hill with the 14th pick. In the 2018 NWSL College Draft, traded her to the Orlando Pride for the first and fourth-round picks. After Hill graduated college, the Pride signed Hill in May 2017. She got her first start on June 3.

In a game-winner matchup against Sky Blue FC, Hill made her first professional goal on June 28, 2017. Her rookie season ended, scoring three goals and one assist from only 14 games, 8 of which were starts. For the 2018 season, she had her contract option exercised. In 2018, she went to play 21 games but got injured, leading to her starting on only seven of them. She scored four goals, and she received a new contract offer at the end of the season.

Rachel Hill joined the Australian club Perth Glory on loan for the 2017–18 W-League season on October 19, 2017. She scored nine goals(the third-most goals in the league) and made six assists(the most assists in the league) in the first season at Perth. Later on, she re-signed a loan agreement for 2018-19 and wrapped up with six more goals as the team finished runners-up in the Grand Final.

Rachel Hill is secretive about her personal and love life. She has not shared if she is dating or in a relationship. She often shares photos of her friends, but she likes to keep her private life behind the cameras.

Rachel Hill is one of the famous professional soccer players. According to allfamousbirthday.com, Hill has a net worth of approximately $1.5 million. She lives a moderate life with her family.