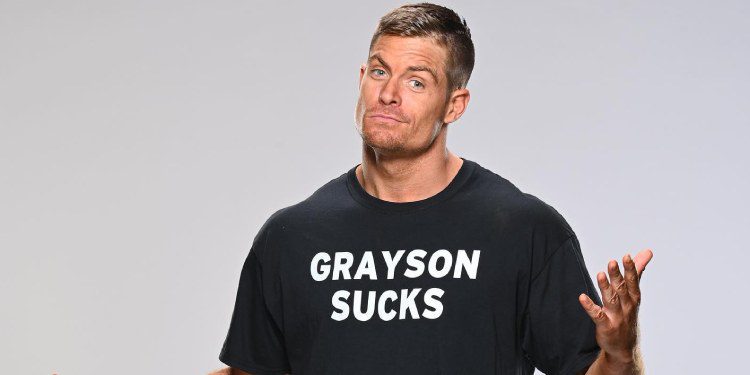 Who is Grayson Waller?

Matthew Farrelly, popularly known as Grayson Waller is a professional Australian wrestler who is currently signed with WWE. Matthew is performing on the NTX brand under the name of Grayson which tends to be his ring name.

Matthew Farrelly used to wrestle on the independent circuit under the ring name of Matty Wahlberg before joining WWE. Waller made his debut as a wrestler on 15th April of the year 2017 and was coached by Robbie Eagles and Madison Eagles.

The skilled and talented wrestler Grayson Waller aka Matthew Farrelly who came to fame shortly after he started his career as a wrestler was born on 21st March of the year 1990. Currently, Grayson is 32 years old with a birth sign of Aries.

Matthew Farrelly aka Grayson was born in Sydney, New South Wales, Australia. He was nurtured by his parents in Australia alongside his siblings in Sydney, Australia.

With that, he holds an Australian citizenship card, belongs to mixed ethnicity, and follows the Christianity religion.

Concerning his academic background, Grayson Waller completed his academic education at the local institutes of his hometown. Along with being great at sports and extracurricular activities, he was also good at academic studies.

His active participation in both academic and non-academic activities made him win many medals and trophies to date.

Grayson started his career as a wrestler on 15th April of the year 2017 through a Newcastle Pro Wrestling Event under the ring name of Matty Wahlberg. He lost his first match against SnapChad.

He later formed professional wrestling called tag team with Carter Dreams and named it THE BABES. This team was managed by Harley Wonderland.

Grayson Waller signed with World Wrestling Entertainment Inc. on 14th March of the year 2021 and made his WWE debut on 11th June of 2021 during the 205 Live.

He wrestled under the ring name of Grayson Waller and defeated Sunil Singh in his first debut match.

Apart from these, Grayson Waller or also known as Matthew Farrelly appeared on Australian Survivor: Champions vs. Contenders 2 in the year 2019. His outspoken personality made him win recognition all over the world at that time.

He has also made a cameo appearance on an American television sitcom named Young Rock in the year 2021 where he was seen portraying the role of Ric Flair.

Though there are many rumors regarding his relationship status, Grayson is single for now. Waller wants to focus on his career life than his private life with women. He likes to pursue his dream, so till that time, he doesn’t want to be in any relationship.

Rumors and Controversies about Grayson Waller

It was rumored that Grayson was dating fellow Australian wrestler Indi Hartwell but both of them denied this rumor and stated they are single for now.

Grayson has not only amassed fame but also fortune and money through his career as a wrestler. He has an estimated net worth of 3 million dollars, and his net worth may be increased in near future.

He is often seen on expensive and lavish vacations with his family members and folks. Waller is also very fashionable and spends his income on luxurious items.

Grayson is also available on Twitter with the username of @GraysonWWE. He has 15.5k followers on his Twitter account. His tweets and retweets are entertaining to read.