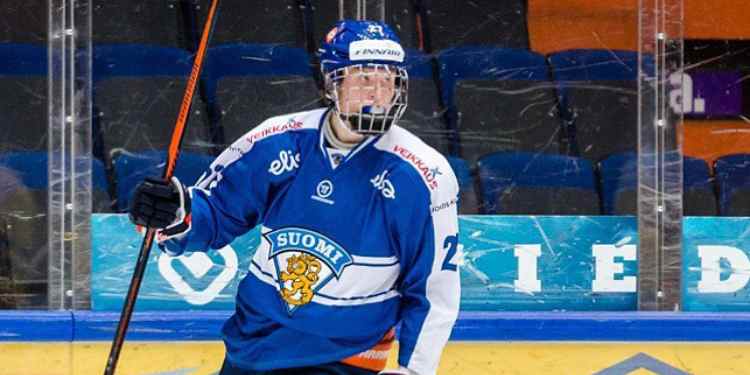 Patrik Laine is a Finnish professional ice hockey player who plays as a winger for the Columbus Blue Jackets of the National Hockey League (NHL) and Finland national hockey team.

He formerly played for Tappara in the Finnish Liiga before being selected by the Winnipeg Jets as the second overall choice in the 2016 NHL Entry Draft.

His exceptional wrist shot has a rapid release, and his strong one-timer from the top of the circle is a consistent threat on man-advantage.

On April 19, 1998, Patrik was born in Tampere, Finland, to Harri (father) and Tuija (mother). His zodiac sign is Aries, and he is now 23 years old. Patrik weighs 93 kg and is 6 feet 5 inches regarding his physique.

Patrik Laine began playing hockey at the age of four and played every position at first. His major position was goaltender, which Patrik considered his favorite and greatest.

Patrik, prompted by his father, switched to forward mode permanently when Patrik Laine was 12 years old. He dropped out of school at the age of 16 to pursue hockey full-time.

Patrik Laine made his Liiga debut with Tappara at 16 in 2014–15, appearing in six games and scoring one point. Nonetheless, he spent most of that season on loan with Mestis’ LeKi.

This season, Patrik scored eight goals in seven games, thanks to excellent play with Tappara early and a strong showing in the 2015 IIHF World U18 Championships.

As a result, Patrik Laine rose in most draft rankings from last season, when he was regarded as a mid-first-round potential.

However, a right-wing began to attract more scouts and casual observers after a dominant performance at the 2016 World Junior Ice Hockey Championships.

Patrik Laine won a gold medal and finished third in scoring with seven goals, six assists, and 13 points in seven games in that championship. Hence, he was named to the all-star tournament team.

After being picked with the second overall choice in the 2016 NHL Entry Draft, he signed a three-year entry-level contract with the Winnipeg Jets on July 3, 2016, kicking off his North American career.

Patrik Laine made his NHL debut on October 13, when he appeared in the Jets’ season-opening game, in which Laine scored a goal and added an assist.

Then, in a 5–4 win over the Toronto Maple Leafs on October 19, he scored his first hat-trick. At 18 years, 183 days, he became the NHL’s youngest player born outside North America to score at least twice in a single game.

On February 21, 2017, he surpassed Ilya Kovalchuk’s 29 goals for the Winnipeg Jets / Atlanta Thrashers team record for most goals by a rookie in a single season.

Patrik Laine earned his fourth NHL hat-trick in a 3–0 win over the New York Rangers on March 6, 2018, becoming only the third teenager in NHL history to score four three-goal games before turning 20.

After the 2017–18 regular season, Patrik was second in league with 44 goals, trailing only Alexander Ovechkin’s 49.

Despite not winning the NHL’s top goalscorer award, he became the first teenager in 30 years to score 80 goals, surpassing Sidney Crosby’s 75 goals.

Patrik completed his fifth career hat-trick at the 2018 NHL Global Series in his home country of Finland after struggling to score at the start of the 2018–19 season, putting up only five points in 12 games.

Thanks to his hat trick, the Jets won 4–2 against the Panthers. Then, in a 6–3 victory over the Vancouver Canucks on November 19, 2018, he scored his sixth hat trick.

Patrik Laine traveled to Switzerland to practice SC Bern as a restricted free agent without a contract. Patrik signed a two-year, $13.5 million contract extension with the Jets on September 27, 2019.

The Columbus Blue Jackets signed him on January 23, 2021, in exchange for Pierre-Luc Dubois and a 2022 third-round pick.

In 45 games during his first season with Columbus, Patrik Laine had ten goals and 11 assists. Laine signed a one-year, $7.5 million contract deal with the Blue Jackets on July 27, 2021.

The Columbus Blue Jackets signed him on January 23, 2021, in exchange for Pierre-Luc Dubois and a 2022 third-round pick.

In 45 games during his first season with Columbus, Patrik Laine had ten goals and 11 assists. Patrik signed a one-year, $7.5 million contract deal with the Blue Jackets on July 27, 2021.

Speaking of his international career, he competed in the 2015 IIHF World U18 Championships for Finland in April 2015.

Patrik Laine scored eight goals and three assists for 11 points in seven games, helping his side to the gold medal match against the United States and a silver medal.

He was then named to the All-Star Team for the 2015 U18 competition. On January 5, 2016, he represented Finland at the 2016 World Junior Championships, where they won gold.

He was nominated to the Finland lineup for the 2016 IIHF World Triumph following his Liiga championship, making him the youngest Finnish player ever to compete.

Patrik Laine made his tournament debut against Belarus, scoring two goals and one assist to become the competition’s youngest player to collect three points in a game.

Sanna Kiukas is Patrik’s girlfriend. He usually shares pictures of them posing together on Instagram.

Sanna might be proud of being a partner of a champ and could be supporting him so that he can have enough courage to win every match.

His precise income is presently unknown. However, he might be earning a strong amount for his living that counts on his performance.

According to our estimation, his net worth could be approximately $4 million or slightly above.

Similarly, his Twitter handle is @PatrikLaine29, and it has 31 followings and 52.1k followers. Follow him to stay updated on his life and view his game-related posts and tweets.

For full biography about your favorite Ice Hockey Player, please check out Sportscovering.