As there were a lot of fighting techniques in the world which are originated from the different parts of the world but few people get skilled in such particular skills that they made them as their profession. TJ Dillashaw is a mixed martial artist. Some are boxing, karate, taekwondo, and others used for defense and can be used for professional purposes. Some use it for sports, whereas some use it for wars as warriors.

Here we will talk about one of the personalities who is a master in Mixed martial artist, TJ Dillashaw.  He is a mixed martial artist and made them it as their career. He is American and recently got the title of a different award. He recently signed with the Ultimate Fighting Championship (UFC). 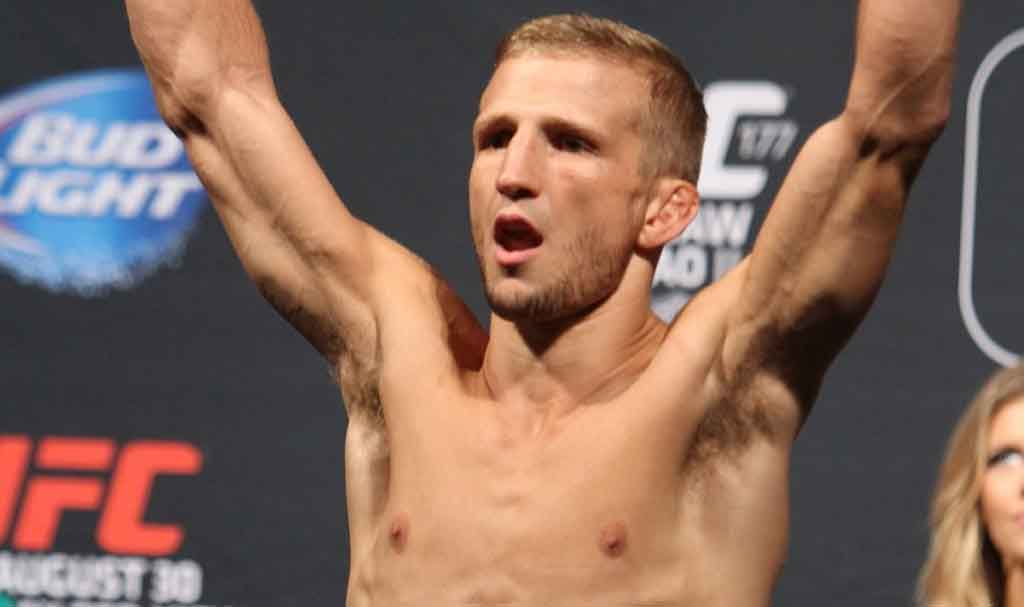 TJ Dillashaw was born on February 7th, 1986, in Sonora, California, US. His full name is Tyler Jeffrey Dillashaw but later professionally abbreviated as TJ Dillashaw. He is an MMA player and contributed a lot to the field of martial arts. As he was born in Sonora, but he grew up in Angels Camp, California. He has a residence in Denver, Colorado, US now.

Dillashaw attended Bret Harte high school in California for four years. There he was in the wrestling team and also keenly interested in the football team as well and in the football team for 2003-04. After that his graduation from there, he joined the college at California state university. At college, he was in the titans wrestling program and completed it successfully. So in over, he got a full opportunity from his family to study and fulfill his dreams.

Highlighting his career, let’s start from his graduation; TJ Dillashaw graduated from high school in June 2004 and got an athletic scholarship to wrestle Cal State Fullerton Titans, which led his wrestling career. When he was a freshman during 2005-2006, he has come into highlight with 14-16 records in different matches.  In 2006, during his summer, he went to Ukraine to furnish his wrestling skills. In April 2007, The University Greco Wrestling Championships held in Akron, Ohio, notices him gaining the sixth position in the match, and in the same year, he grabbed 4th position at PAC-10 Championship. 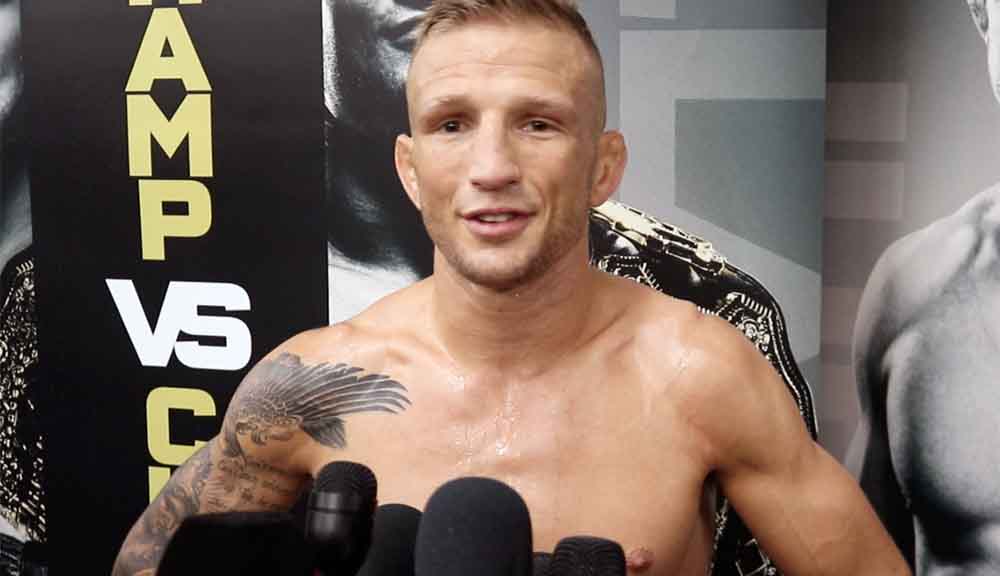 After that, TJ Dillashaw grabbed the second position Cliff Keen Invitational and others as arising MMA. Then, on the advice of Munoz, he starting his training with the Alpha male team in Sacramento and got more wrestling skills which helped him in the future. After preparing himself, he finally debuted professionally in MMA on March 26, 2010, and won the match with pro-debuted Czar Sklavos.

Then TJ Dillashaw went the consecutive three wins with Brandon Drucker, Mike Suarez, and Taylor McCorriston, respectively, in three matches. In a fight with the ultimate fighter session, team Brandon Drucker, Mike Suarez, and Taylor McCorriston, he contracted with the World’s largest MMA promotion Ultimate Fighting Championship (UFC), in the year 2011. After many learning from different matches in July 2017, he presented himself in present UFC Bantamweight champion Cody with Garbrandt to serve as the headliner for UFC 213. Garland that time, got an injury, and that fight had been canceled, which was rescheduled for 4th November 2017.

Personal information firstly covers his parent’s names and details. TJ Dillashaw’s father’s name is Hal Dillashaw, and his mother’s name is Janice Dillashaw. He married the beautiful lady Rebecca Dillashaw. He was born in Sonora; His Zodiac sign is Aquarius. He took all the formal education from California. He is a white ethic personality who developed a career in MMA with a great impression among America’s individuals. TJ Dillashaw is equipped with the different sets of fighting skills with which he garbs the different awards and titles from the international arena.

TJ Dillashaw has a height of 5 ft 6 1⁄2 in (169 cm) with a muscular body. Overall he has a perfect height and an attractive body. Because of his profession, which needs continuous practice and physical exercise, he has perfect body shape. His interest in athletics and his martial artist profession are too smart and too fast to respond. He is considered a fit person. Although TJ Dillashaw’s height is not enough considering the American citizens as they are mostly above 6 feet, he is the perfect height which is more resemblance to Asian continents. 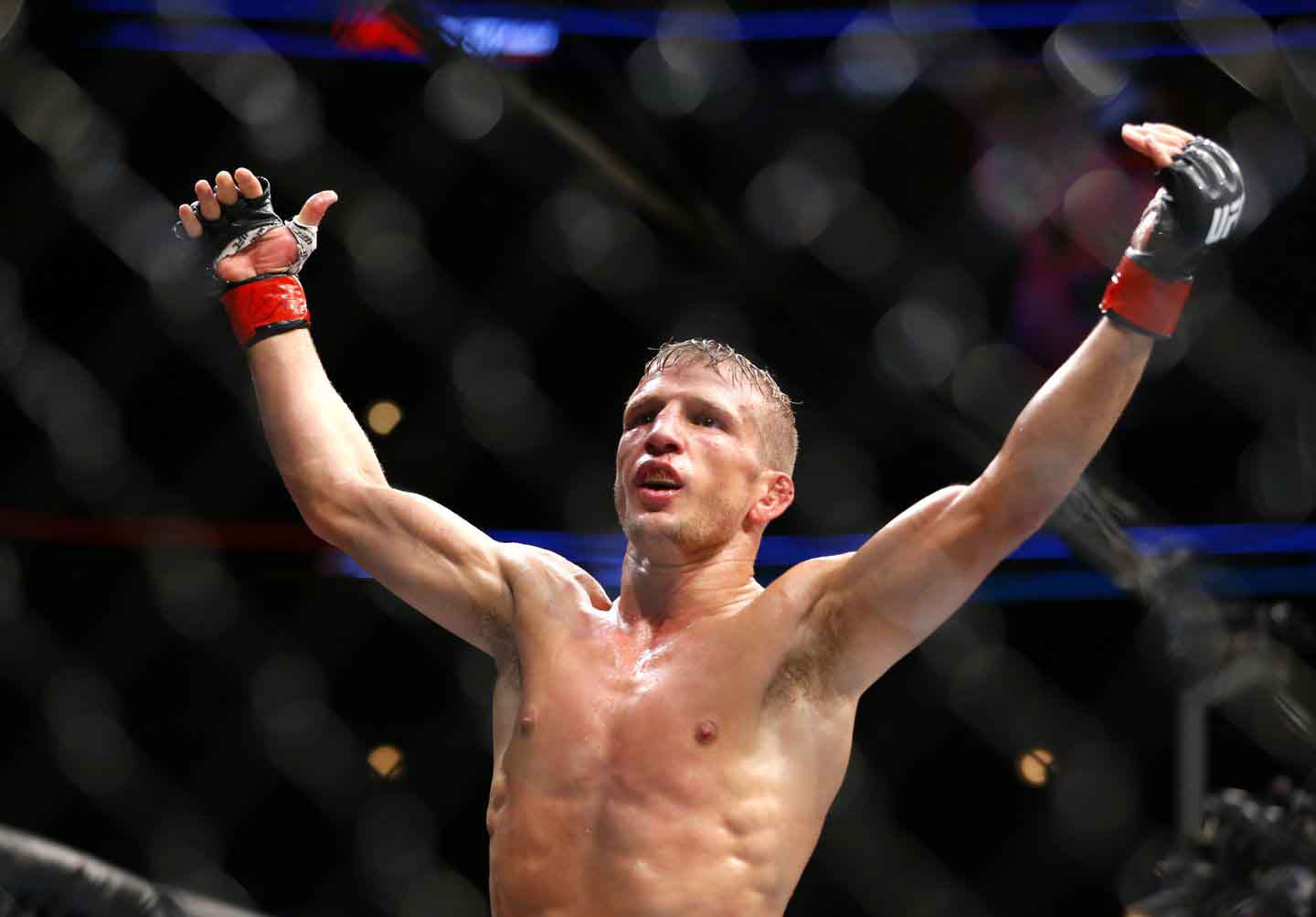 Talking about his nationality, TJ Dillashaw is a US citizen, and so he has American nationality. He was born in the US and also brought up there as well. His entire career has started in the US. Although he has to shift places inside the country, he is American by birth. His high school and college are both from America. His parents are also American citizens. He is the MMA who gave a lot to America and also gained name and fame from America. Starting his journey from America, he left his impression all over the world who loves martial arts.

Based on the different official reports, his net worth is considered $1 million initially but based on the report of 2019, his net worth is $ 3 million. But few of the authorities also claim that his actual net worth is just $1.3 million too.  He is among the best fighter with ell settled life. He has luxurious housed and branded car collections as well. He is blessed with one son. So he is a professional fighter who is living a luxurious life and happy life with his family and friends.