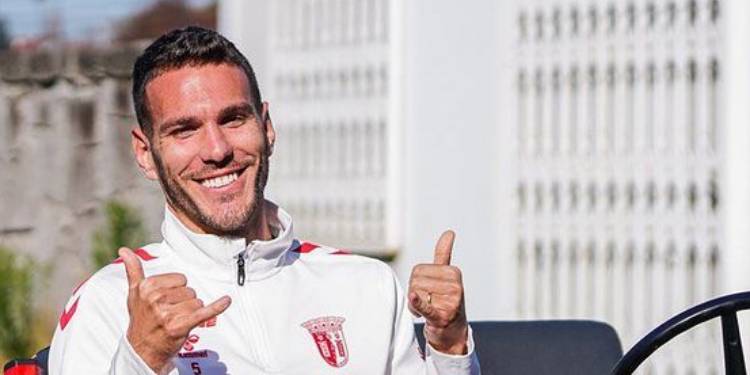 Furthermore, Nuno is also on the FIFA 22 with an overall rating of 77 and potential, as stated by sofifa.com.

Born on August 19, 1990, Nuno Sequeira hails from Porto, Portugal. Nuno holds Portuguese Nationality and comes from a white ethnic background. Since Nuno was born on August 19, his star sign is Leo.

Unfortunately, Nuno has yet to reveal his parents’ details to the media as he respects his parents’ privacy.  Likewise, he has remained silent regarding his educational background. Therefore, we assume he gained education at a local high school near his hometown.

However, his exact body measurements are unknown and still under review.

Nuno Sequeira started his career with the youth team Senhora da Hora in 1999. Later in 2006, he left Senhora and transferred to Leixoes SC. Afterward, Nuno followed his senior debut in the lower leagues against Leca F.C. and AD Fafe.

Playing for Fafe, he made the most goals playing for one club i.e. 10 goals. In March 2013, Nuno signed a four-year contract with Primeira Liga club C.D. Nacional. In his first two seasons, he played only 13 matches.

On November 27, 2015, Nuno secured his first goal for the club and ultimately concluded in a 3-1 home victory against C.S. Maritimo. Before leaving Nacional, he made 73 appearances with one goal.

On May 24, 2017, Nuno got a four-year contract with top-tier side S.C. Braga. Afterward, he started playing for Braga and secured his first goal against his former club with a 5-0 victory. However, his season ended quickly following a left-thigh muscle injury at the end of the derby.

Soon after, Nuno played a match against S.L. Benfica. Unfortunately, he ruptured his left knee’s anterior cruciate ligament. Thus the match concluded in a 6-1 loss.

Further, Nuno played in the UEFA Nations League against France and Sweden.

The left-back started his career early on and has obviously amassed a fortune playing for numerous clubs. In addition, he also signed contracts with two clubs, i.e., Nacional and Braga.

Sources claim that Nuno has an estimated net worth between $1-$5 million with an annual salary of £306,800. Furthermore, Transfermarkt states Nuno’s market value is €3.00 million, last updated on December 27, 2021.

Is Nuno Sequeira in a relationship?

Nuno is a married man. He tied the know with his wife, Catarina Costa. However, Nuno has not revealed his wife’s details to the public.

Further, the pair are proud parents of two wonderful children – Mateus and Benedita. Scrolling through his Instagram, it shows that the pair dated for over five years before sealing the deal in 2018. Regarding his marriage, he captioned

“Each page a story. This was by far the most important… until now. More than and more blessed to write our fairy tale. A word of thanks to @reticenciasproducoes and @valedacorgaeventos for thier care and professionalism. are the biggest”

Nuno is also active on Twitter as @nuno5sequeira, with a fan following of 398 followers.

For more biography about your favorite soccer players, please stay connected with us at Sportscovering.