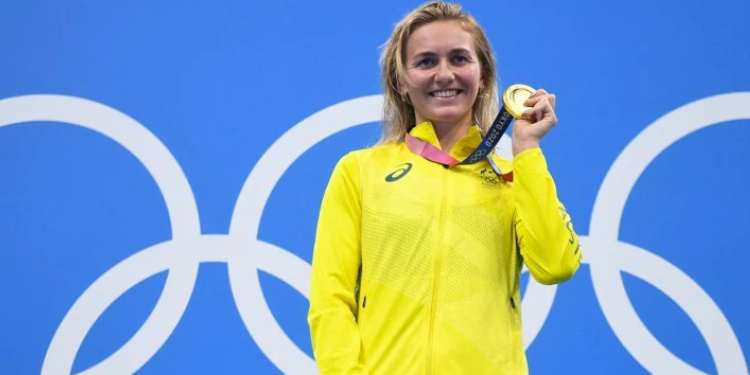 Ariarne Titmus is an Australian swimmer who is recognized as the best young swimmer. She competed in the Tokyo Olympics 2020 for the first time in 400m freestyle swimming and won a gold medal. Last time she’s also qualified for the Olympics, which was held at the Rio 2016 games.

Titmus has been swimming for over 16 years and is on the Australian national team with her coach (Dean Boxall). She is quite a dedicated swimmer who puts lots of effort into her training to boost and improve her swimming style.

She has won several gold and bronze medals internationally, such as Pan Pacific Championship, Commonwealth Games, and World Championships.

Ariarne was born on 7 September 2000 in Launceston, Tasmania, Australia. She, later on, moved to Queensland for further studies and to learn more about swimming and for training opportunities.

Titmus’s parents are Steve Titmus (Father) and Robyn Titmus (mother). She also has a sister named Mia Titmus. Her families are very supportive of her hobby and the career she chooses as swimming.

Her father (Steve Titmus) is a journalist, volunteer, corporate communication consultant. Steve began his career as a cadet journalist at the examiner in Launceston, Tasmania, later on, awarded with Cricket Tasmania “Journalist of the year” and AFL Tasmania “Electronic Journalist of the Year.”

Titmus’s childhood journey was quite good, supportive, and engaging with her sister and parents.

Ariarne Titmus started her career as a swimmer from the beginning. He practices her swimming for quite a long time.

After discovering her swimming was getting better and ready to compete, Titmus joined the Women’s 200-meter freestyle event in 2017. Again, it was the world aquatics Championship where Ariarne just practiced her swimming even greater.

Besides, Titmus also won the gold medal in the 4x 200-meter freestyle event at Commonwealth Games, 2018. In addition, she has also broken the record in the women’s short course 400-meter freestyle swimming event in FINA World Swimming Championship, 2018, by beating Wang Jianjiahe by 0.5 seconds earlier.

Moreover, Ariarne again broke the Oceania record, 2018 by winning the gold medal in the final at 3:58.76.

Titmus also joined the inaugural International Swimming League in 2019 and represented Cali Condors. She completed the league by achieving 3rd place in the final match held in Las Vegas, Nevada.

Titmus competed in the 400m individual medley event and finished this year with a time of 4:30.3 Titmus’s determination to be an elite swimmer is supported by the fact that she practices for four to five hours every day that she can.

Recently in the Tokyo Olympics 2021, which is supposed to be held in 2020, Ariarne Titmus won two gold medals in 400m freestyle and 200m freestyle in the final.

Ariarne Titmus is now in a relationship with Swimmer Kyle Niesler. Both the couples are happy and living their best life together. They also share their lovely pictures on their social media accounts.

Ariarne Titmus is a professional swimmer, and her net worth is estimated between $1 million to $2 million.

Ariarne Titmus is quite active on her social media accounts. She has over 146k Instagram followers.