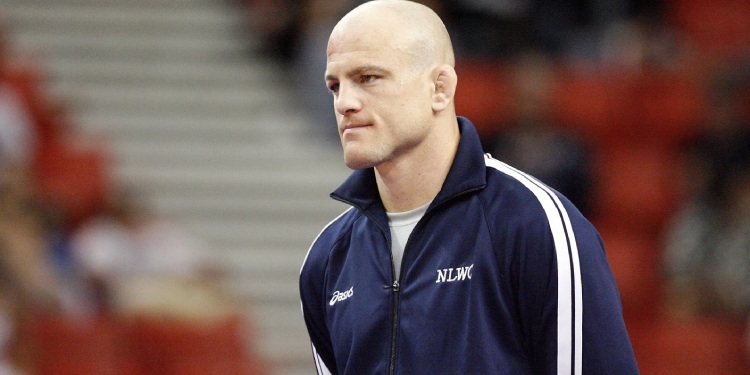 Cael Sanderson is a former American wrestler. He is now the head coach of Penn State wrestling and a polished former student-athlete at Iowa State University. He is the first and only wrestler in NCAA Division I history to be undefeated in official contests, with over 100 victories.

On June 20, 1979, Cael Sanderson was born in Provo, Utah. He is a Heber City, Utah resident, and his birth sign is Gemini.

His full name is Cael Norman Sanderson, and his age is 42 by birth. Cael stands at 6 feet 0 inches and weighs 87 kg regarding his physique.

As a kid, he went to Wasatch High School, and after passing out of school, he attended Iowa State University. He earned a bachelor’s degree in art and design from Iowa State in 2002.

In terms of his parents and siblings, he is the son of Steve and Debbie Sanderson. He was raised alongside his brothers: Cody and Cole Sanderson.

Cael has a wrestling background family where his father was also a wrestler, and his brother, Cody, also used to wrestle while they were in school.

Behind his success, there may be his supportive family, who have always been in his highs and lows.

His wrestling career began at school. His father, Steve, is also a former wrestler, and it was Steve who taught him to wrestle while he was in school, and his father was a coach there.

Following school, he joined Iowa State University and began doing the same there that he was born to do. As a student-athlete at Iowa State, Cael never tasted defeat in a wrestling match, compiling a perfect collegiate career record of 159-0.

His four-year line of excellence was named the number two most remarkable attainment in collegiate sports history by Sports Illustrated.

Penn State selected him as its 12th head wrestling coach on April 17, 2009, and the nation quickly turned its gaze east.

Since then, Penn State has won eight NCAA championships and countless Big Ten regular-season and tournament titles while crowning multiple individual winners and keeping the highest academic standards in the country.

Cael Sanderson was married to Kelly, and the couple has two sons, Tate and Teag.

As a wrestling coach and former wrestler, Cael could also be busy teaching his boys to wrestle or encouraging them to become an athlete.

On the other side, his wife may be helping him carry out the family responsibilities.

Currently, his exact income is not mentioned anywhere yet. However, several online sources have estimated his earnings on their website.

And as per our analysis, he may have a net worth of around $1 million to $2 million.

Nevertheless, he was the toughest opponent to other wrestlers in his prime and now working as a head coach. As a result, Penn State might be compensating him highly.

Cael is available on Instagram and Twitter, where he often shares posts regarding his work. However, on Instagram, his handle is @sandersoncael, and he has 34 posts, 18.2k followers, and 140 followings.

On the other hand, Cael goes by @wcaelrx with 242 followings and 162 followers on Twitter. Follow him on both to learn more about his career and life.