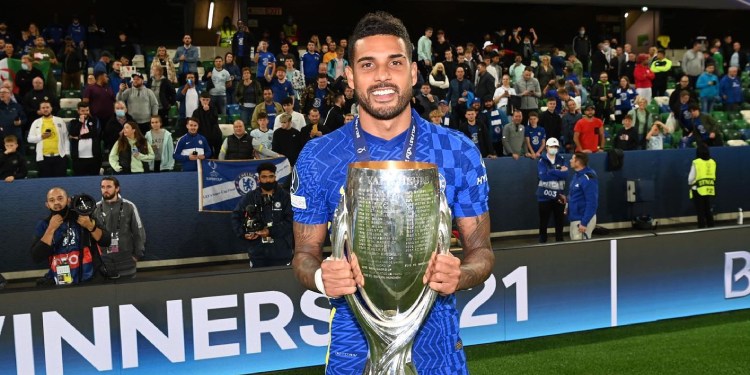 Who is Emerson Palmieri?

Emerson Palmieri is a popular professional football player from Brazil who is currently playing as a left-back player for Lyon.

He used to play for Brazil’s U-17 level before he announced his desire to represent the team Italy in football. Emerson was granted Italian citizenship after his announcement in the year 2017.

Palmieri has appeared in UEFA Euro 2020 and has also won that tournament. He made his senior international debut in the year 2018.

Emerson Palmieri, also known as Emerson Palmieri dos Santos Cavaliere OMRI, rose to prominence after establishing himself as a footballer. He was born on August 3, 1994. Palmieri is 27 years old and was born under the sign of Leo.

Emerson was born in the Brazilian city of Santos, the son of Eliana Palmieri and Reginaldo Alves dos Santos. In Sao Paulo, Brazil, he was born to a wealthy family with his sibling Giovanni Palmieri dos Santos.

Emerson built an irreplaceable link with his family members as he grew up, leading to frequent hangouts with them on important occasions. Emerson carries a Brazilian–Italian citizenship card, is of mixed race, and practices Christianity.

Palmieri received his academic education in his hometown’s municipal institutes. HAs a result, he excelled in sports, extracurricular activities, and academics.

Emerson stands 5 feet 9 inches tall with a corresponding weight of 79 kg. His brown pair of eyes and brown hair compliments his brown skin tone. Emerson has a tattoo on his hands and inked his brother’s picture below his chest.

After completing his formation in local Santos’ youth categories, Palmieri debuted as a footballer on 17th April 2011.

He was hired as a substitute for Keirrison de Souza Carneiro in a 3-0 Campeonato Paulista home win against a Brazilian football team Paulista.

A 1-1 draw against XV de Piracicaba was the first start for Emerson Palmieri as a football player on the 21st January of the year 2012.

Palmieri was loaned to Serie A’s Palermo with a buyout clause where he made his first debut on 24th September as a second-half substitute of Fabio Daprela. He appeared in a total of 9 matches for the club.

Emerson got enrolled with an Italian club named Roma on 31st August of 2015 as a loan for one year, where he made his debut on 4th October with a win of 4-2 against Palermo.

Palmieri was outright for an estimated income of 2 million dollars on 5th December of 2016.

He signed a four and half year contract with an English football club Chelsea on 30th December 2018 with a rumored transfer fee of 20 million euros with a 9 million euros bonus.

His premier league debut as a second-half substitute on 4th March of 2018 gave his team a 1-0 win against Manchester City.

This outstanding footballer has represented his country Brazil at the under-17 level in the 2011 South American U-17 Championship.

This charming young man who has the potential to steal hundreds of hearts is in a committed relationship. He started dating Thaiany Xavier in 2017 and officially announced their relationship to the media in 2020. They have two beautiful children.

Emerson has an estimated net worth of $10.5 million. He is enjoying his luxurious life with his family with all the income he makes. Palmieri is also seen on lavish vacations with his friends and family.