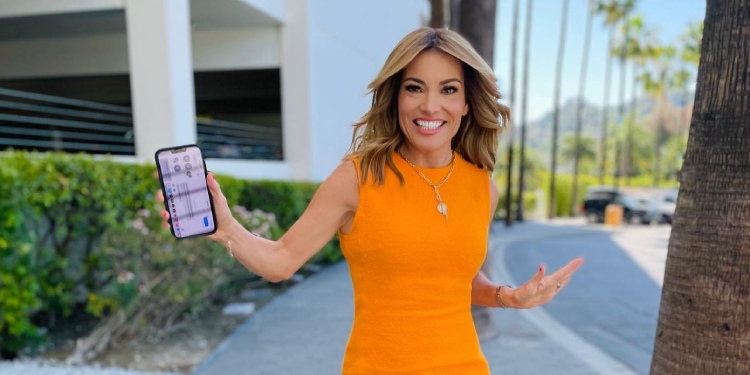 Kit hoover is a television personality, celebrity, sportscaster, and broadcast journalist from the U.S., working as the host of Access and co-host of Access Live.

Unfortunately, her parents’ details are currently not available. However, she is of Irish descent and a successful lady.

So, perhaps, Kit’s parents are the people who had her back and still have and given all the support they could from their side to see her reach the peak of her career.

Talking about her education, Kit went to the University of North Carolina, Chapel Hill, and graduated with a B.A. in journalism in 1992.

Kit debuted on television as a cast member on Road Rules: the USA – The First Adventure, the inaugural season of MTV’s Road Rules, in July 1995. It is a reality T.V. series that pursues five college-age cast members crisscrossing the nation in a Winnebago.

After the Road Rules, she worked on a nationally syndicated magazine show as an entertainment reporter from 1997 to 1998.

Kit entered Fox News in 1999 as a journalist for FOX Files, a newsmagazine produced by the Fox Broadcasting Company.

She also worked as a journalist for The Pulse and Celebrity Spotlight, co-hosting the latter. In addition, Kit also co-hosted FOX Rules with Kit Hoover.

From January 2004 through July 2006, Kit was the lead Feature and Field Reporter for the tennis events, including the Australian Open, Wimbledon, and the French Open.

However, she left ESPN in September 2006.

Since leaving ESPN, Kit has hosted various programs and channels: T.V. Guide Channel, Six Flags T.V., Real Simple on TLC, and Shaq Vs. And currently, she is the host of the flagship program Access Hollywood.

She was married to Crowley Sullivan, and the couple tied the knot on August 21, 1999. Since their marriage, they have successfully created a sweet and happy family.

Kit and Crowley have 3 kids in the family and they are two daughters, Campbell and Hayes Sullivan, and a son Crowley Sullivan Jr.

In accord with Celebrity Net Worth, her salary is $1 million, and she has a net worth of $5 Million.

Nevertheless, earning such a huge amount by working hard is normal because Kit is a talented sportscaster, journalist, etc., and she deserves it. She could still earn more of those mentioned amounts in the coming days.

Kit Hoover can be found on Facebook, Twitter, and Instagram. Nonetheless, she has her presence on those regular social sites to stay in touch with her people and target audience.

Kit’s Facebook account is in her real name, and she has 15K followers and 3 followings, whereas she goes by the handle @KitHoover with Forty-one followings and 27.3k followers on Twitter.

Similarly, her Instagram handle is @kithoover, and she has 2,507 posts, 77.7k followers, and 385 followings. Follow Kit on these platforms to check out her life and work updates.

For full biography about your favorite Sportscaster, please check out Sportscovering.