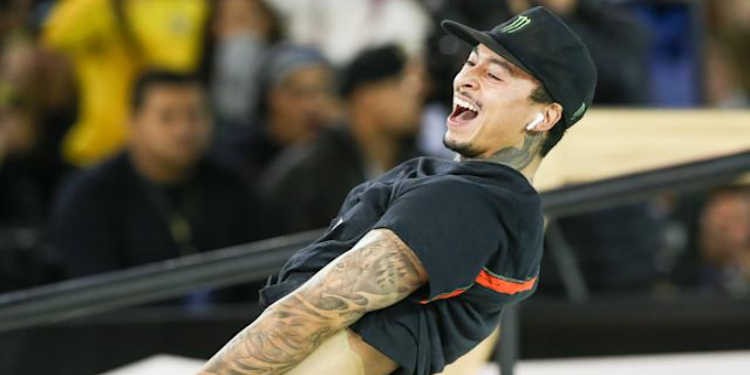 Nyjah Huston is an American professional skateboarder and entrepreneur. His full name is Nyjah Imani Huston. He has competed in and won many different skateboarding competitions since 2010 and has won a number of them. Huston is best known for his gold medal win in the Street Skateboarding event at 2014, 2017, 2018, and 2019 X Games.

Huston also has debuted in the 2021 Tokyo Olympics which is supposed to be held in 2020 to show his talent one more to the world. He always has a positive attitude and is able to overcome adversity.

Nyjah Huston was born on November 30th, 1994, in Los Angeles, California. He was the son of world-famous skateboarder Adeyemi Huston (Father) and he was named after Nyjah, the district he was born in.

He grew up with his three brothers (Abhi Huston, Kiade Huston, and Jahmai Huston) and one Sister (Isha Huston).  All of the Huston children were vegans and taken care of by their mother (Kelle Huston). Besides, they were raised in a strict family lifestyle where they have to follow all the positive rules and regulations by their father.

Huston was first noticed at the age of eight when he could be seen in his father’s videos. His father is always strict with him and wanted him to practice skateboarding each and every day.

Because of Huston’s father’s dream of him becoming the best skateboarder, he also has purchased an indoor skate park in the woodland for Nyjah Huston. He spends most of the time in the park practicing skateboarding.

Back in 2006, Huston’s parents are separated from each other while living in Puerto Rico. After the separation, Huston started living with his father because his mother went back to California. During his stay with his father, he competes in a small skateboarding program and also makes a short video about it.

Huston started skateboarding when he was 5 years old. He has had a long accomplished career with endorsements from Quicksilver, Converse, Oakley, and Nike. Huston is sponsored by numerous skateboard brands like Supra Footwear because of his popularity and talent.

In 2007, Huston released his very first video with his father in the Tony Hawk’s Proving Ground video game.

He has also teamed up with professional skateboarder Ryan Sheckler and together they won the US$250,000 “Supernatural” invitational championship. Besides, in 2011, Huston won his second championship, this time in the “MTV’s King of the Rock”.

Till now Nyjak Huston has won over 7 gold medals in various skateboards and other summer X games.

Nyjah Huston debuts his skateboarding talent in Tokyo Olympics in 2020. Begin the six-time world skateboard champion and winning tons of gold medals, he also wants to add Olympic gold medal to his list.

He competes with other various popular skateboarding showing his skills and skating styles. Unfortunately, he didn’t get a chance to win a gold medal but came in 7th position in the Tokyo Olympics game.

Besides, the Tokyo Olympics skateboarding gold medal is captured by Yuto Horigome from Japan.

Nyjah Huston is currently in a relationship with his girlfriend Alexa Adams. She is a famous Instagram model and popular social media star. The couple met back in 2020 for the first time.

The relationship of both Huston and Alexa Adams is viral after a couple shares a cuddling photo together on social media. Similarly, Nyjah Huston’s girlfriend Alexa Adams is also the host of a cooking podcast (3 Girls 1 Kitchen).

Before getting together with Alexa Adams, Huston was dating Kateri Dion who is a popular Honor-winning skateboarder.

Nyjah Huston is the highest-paid skateboarder in the world with a net worth of $12 million. All of his talent and hard work make him a skateboard millionaire.

He also runs the endorsement with popular big companies such as Nike, Doritos, Converse, Mountain Dew, Social CBD, Mob Grip, and more from where he earns millions of millions.

Nyjah Huston is also active on the social media platform. He has over 4.9 million Instagram followers and 262.8k followers on Twitter. In addition, he has also over 2.7 million followers on his Facebook page.