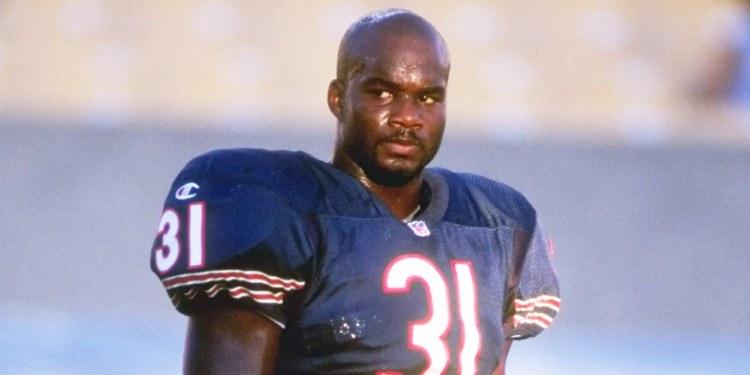 Who is Rashaan Salaam?

Rashaan Salaam, whose full name appears to be Rashaan Iman Salaam, was a popular professional football player who used to play football as a football running back for the National Football League (NFL).

Salaam shared fame worldwide after he started playing football as a running back for the University of Colorado and won the Heisman Trophy in 1994.

Rashaan started his career in 1992 as a college football player running back with the University of Colorado.

The famous and talented football player who is no more with us was born in 1974 on 8th October.
Salaam would have been 47 years old with a birth sign of Libra. Rashaan stands 6 feet 1 inch tall and weighs 102 kg.

Rashaan Salaam was born in San Diego, California, the United States of America as the son of former running back football player for Cincinnati Bengals Teddy Washington.

With that, Rashaan Salaam holds an American citizenship card, belongs to the Black ethnicity, and follows the Christianity religion.

Concerning his academic background, Rashaan attended La Jolla (CA) Country Day for his high school education. He later got enrolled in the University of Colorado for his further education.

Along with being good at sports and extracurricular activities, Salaam was also good at academic courses.

Rashaan started his career as a football player at his college after being selected to be part of the Colorado Buffaloes football team in the year 1992 to the year 1994.

Salaam made his junior college years football career very successful with a total record of 2,055 yards and 24 touchdowns in just one season.

Rashaan was part of the University of Colorado football team when the team won 41-24 against Notre Dame Fighting Irish in 1995.

Rashaan started his professional career after being selected for the 1995 NFL Draft by the Chicago Bears. He was with the team from the year 1995 to the year 1997.

Salaam has been honored with many awards throughout his career, including the 1994 Heisman Trophy and the 1994 Walter Camp Award.

Rashaan was also awarded Sporting News Player of the year in 1994 and UPI NFC Rookie in 1995.
He also won the Unanimous All-American Award in the year 1994.

Rashaan Salaam was the youngest player in National Football League history to rush for 1,000 yards.

This popular football who made his name worldwide shortly after being introduced as a football player, was found dead on 5th December of 2016.

After a few autopsies, it was declared that it was a suicide, and he had also left a note beside him.

Salaam was never married. He had never decorated his life story with his love story.

Rashaan Salaam had an estimated net worth of $4 million. He was enjoying his luxurious life with his family members.