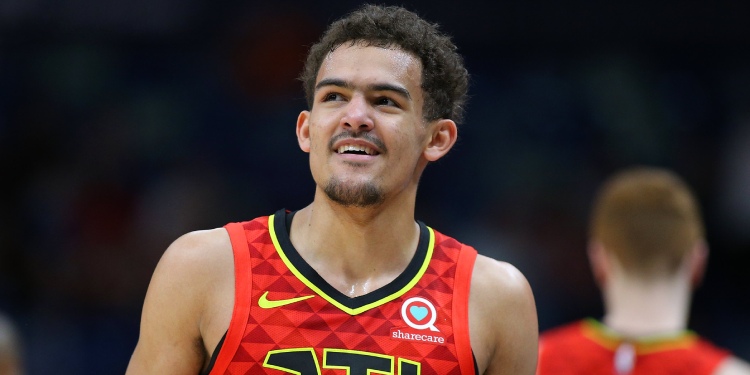 Rayford Trae Young is a professional basketball player from the USA who plays in the National Basketball Association (NBA) for the Atlanta Hawks. His official playing position is the point guard, and he wears the number 11 jersey.

His full name is Rayford Trae Young, and he is the son of Candice and Rayford Young. He also has the nickname “Ice Trae.”

His father, Rayford, is a former collegiate basketball player who played for Texas Tech at a young age. For that reason, it signifies that Trae has the influence of his father on him.

He is the older child of his parents, who has 3 younger siblings in the family, a brother Tim and 2 sisters, Caitlyn and Camryn.

Trae is a big fan of Steve Nash, a former Canadian professional basketball player and now the head coach of the Brooklyn Nets.

Multiple organizations named him Oklahoma’s Player of the Year, and he also won McDonald’s All-American honors.

The point guard made his college debut in the 2017 season, winning over the Omaha Mavericks on November 12, averaging 15 points, 10 assists, and six rebounds.

He then scored 22 points and a season-high 13 assists in a victory against the Ball State Cardinals just three days after making his debut.

After losing in the 2018 NCAA Men’s Basketball Tournament, Ice Trae declared his purpose to go without his final three seasons of collegiate eligibility and announce the 2018 NBA draft.

On June 21, 2018, the Atlanta Hawks accepted the draft requests for him, the fifth overall pick in the 2018 NBA Draft.

And a protected 2019 first-round draft pick from the Dallas Mavericks in a swap for the draft rights of Luka Dončić, the third overall selection.

So on July 1, Trae officially became one of the Hawks. He ended the Hawks’ third game with a season-high 35 points and 11 assists in a 133–111 triumph versus the Cleveland Cavaliers on October 21.

On February 25, 2019, Trae achieved a then career-high 36 points and made a career-high eight 3-pointers against Houston Rockets, but unfortunately, they lost the game by 119–111.

Taking about his international career, Trae played the 2016 FIBA Americas Under-18 Championship with a U.S. men’s national U18 team, and they won gold.

Based on his Instagram post from December 17, 2021, Trae proposed to a beautiful lady and made the hashtag Future Mrs. Young which implies he will marry her soon.

However, he didn’t mention any marriage date yet after that post. So, perhaps, the couple is waiting for the correct time to tie the knot.

Wealthy Gorilla estimates his net worth to be approximately $5 million as 2021. However, this is 2022, and Trae could be making even more than that.

On the other hand, he is a skilled player, so his income counts on his performance.

He goes by @TheTraeYoung with 121 followings and 1.3M followers on Twitter, whereas his Instagram handle is @traeyoung, and he has 500 posts, 4.3m followers, and 135 followings.

Similarly, he uses his name on Facebook, and his account has 764K followers and 6 followings. Follow him on all three sites to better understand his life and check his game updates.