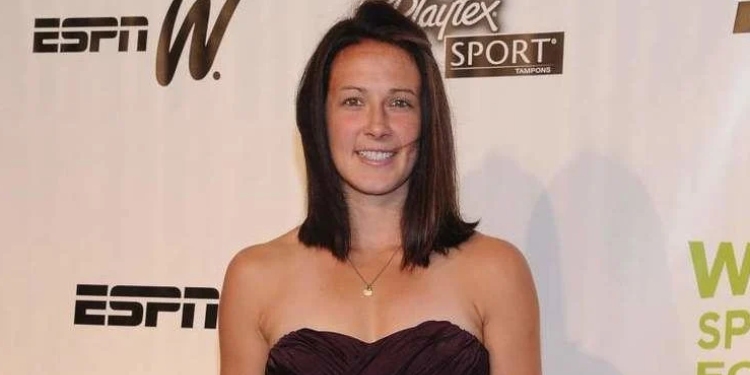 Who is Sarah Huffman?

Sarah Huffman is a former American professional football player who last represented Portland Thorns FC of the National Women’s Soccer League (NWSL). She was a midfielder by position.

On March 5, 1984, Sarah Huffman was born in Danbury, Connecticut, USA. Sarah Her full name is Sarah Eileen Huffman, and she is presently 38 years old. She has a zodiac sign of Pisces. Sarah is 5 feet 4 inches tall and weighs 57 kg.

She had her early schooling at Marcus High School and later moved on to the University of Virginia, where she got a degree in Bachelor of Science (Kinesiology) and a Master of Education.

Talking about her parents and siblings, she has not disclosed about them yet. So, as a result, there are no pieces of information on them right now.

Her football career began at the University of Virginia, where Sarah was a two-time NSCAA All-American, a two-time Soccer America MVP, and a three-time first-team All-ACC selection.

She had 12 goals and 28 assists during her college career, and the total assist she made was the second-most assist in school history.

Sarah joined Washington Freedom in 2007 and won W-League champion that season. The midfielder moved to Norway to join Røa, IL, in 2008 and assisted the club wins the Norwegian Women’s Cup.

She left Røa and returned to Freedom in 2009. However, in 2011, the team changed its name to magicJack and migrated to Boca Raton, Florida.

In 2012, Sarah moved to Pali Blues of the W-League, and the next year she joined Western New York Flash.

She signed with Portland Thorns on April 5, 2014, and it was the last team she played for. Hence, on November 18, she took her retirement from professional football.

She worked on the board of Make-A-Wish Oregon from 2014 to 2020. Sarah is now employed full-time at Nike in Portland, Oregon as a product line manager for kids’ sportswear shoes which she joined in October 2021.

Sarah is now single and bisexual. Her ex-wife is Abby Wambach, her long-time girlfriend, whom she married in Hawaii on October 5, 2013.

But unfortunately, the couple ended their relationship with divorce in 2016. Sarah now lives in her own home in Portland, Oregon, which she purchased with her ex-wife several years ago.

Abby Wambach is a former American footballer, coach, and member of the National Soccer Hall of Fame. Abby used to play as a forward for the teams she played throughout her entire career.

Her age is 41, and she has a birth sign of Gemini. Regarding her physique, she is 5 feet 11 inches in height.

According to EVOL.LGBT, her net worth is $10 million. Sarah is presently serving Nike, one of the reputed sports companies.

Therefore, she may be earning even a bit above the stated amount with her performance as a product line manager for the company.

Likewise, she has created a handle under the name @sarahhuffman14 on Instagram, and it has 188 posts, 13.4k followers, and 313 followings.

Sarah also appears to be a dog lover who enjoys spending her free time with them, based on her social media photos. Follow Sarah on both sites to see the updates on her life.