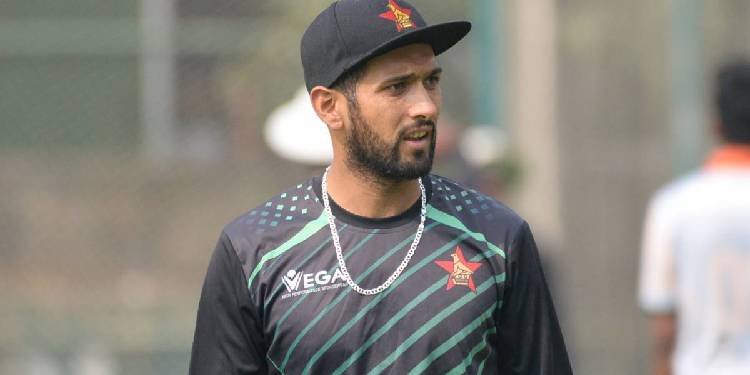 Sikandar Raza Butt is a Pakistani-Zimbabwean cricketer who plays all game formats primarily as a batsman. Raza is ranked on the list of the most popular cricket player. Until adulthood, Raza didn’t even know he had discovered he was good at the sport he played as a child. Raza’s dream before becoming a cricketer was to be a fighter pilot. However, that ended when he failed his eye exam.

Determined to make something happen and succeed in his life, he moved to Zimbabwe with his parents in 2002. After moving to Zimbabwe, citizenship rose to be a problem which he didn’t get until 2011.

Sikandar Raza Butt was born on April 24 1986. He is currently 35 years old. Born in Sialkot, Pakistan, Raza aspired to become a fighter pilot. A dream he had clung to since the age of 11. After studying at Pakistan Air Force Public School Lower Topa for three years, his dream soon was destroyed. He failed a mandatory eye examination. With his dream shattered, he still wanted to succeed in his life. So he moved to Zimbabwe with his family in 2002.

While pursuing a degree in software engineering at Glasgow Caledonian University, he started cricket as a semi-professional. Soon only to realize he was quite good at it.

Sikandar Raza Butt began his career as a cricketer after making his first-class debut in 2007. Raza went to play for the Mashonaland Eagles in 2009 after Zimbabwe’s cricket structure got revamped.

After completing his studies, he made cricket his full-time. In 2010 he made his T20’s debut for the Southern rocks. He played against the Desert Vipers. In the season, he scored 625 runs at an average of 41. Sikandar turned out to be a T20 specialist. In the 2010 Stanbic Bank 20 Competition, he was the leading run-scorer. His domestic performances caught the eye of the selectors. Later he was selected to play a practice match against Bangladesh when Visu Sibanda was injured. His performance was well-received.

Sikandar’s performance earned him a place in the preliminary squad for Zimbabwe’s 2011 Cricket World Cup campaign but didn’t make it to the final squad. He made it to the A trials but was denied the opportunity since he didn’t have citizenship. Later he was granted citizenship in late 2011.

Sikandar kept on putting up with splendid performances, this earned him the ODI cap in 2013. After picking up cricket as his full-time profession, playing for Zimbabwe colors became his dream which he achieved in 2013. Sikandar again put a remarkable performance, scoring 93 off just 48 balls for Southern Rocks against Matabeleland Tuskers. He made his Test debut four months later against Pakistan. He scored fifty in the first innings but was omitted after Taylor returned to the squad.

The Top 5 Richest NBA Players in the World Right Now!

In 2017 came Raza’s big break. He contributed both bat and ball in the match against Sri Lanka resulting in becoming one of the linchpins in Zimbabwe’s first bilateral ODI series victory. This was also the first win for Zimbabwe in a five-match series away from home. A few days later, Raza followed up with a test century against the same opponent in a one-off Test. However, Zimbabwe ended up losing the test despite Raza’s performance.

In February 2018, the ICC(International Cricket Council) awarded him the player of the tournament award for his 319 runs and 15 wickets during the Cricket World Cup Qualifiers.

According to datingcelebs.com, Raza is currently single and has not previously engaged. He has had one relationship previously. Like most celebrities, Sikandar tries to keep his personal and love life a secret.

Being a cricketer, his source of income is his profession – a cricket player. According to Business Insider, Raza’s net worth is approximately $1.5 million.