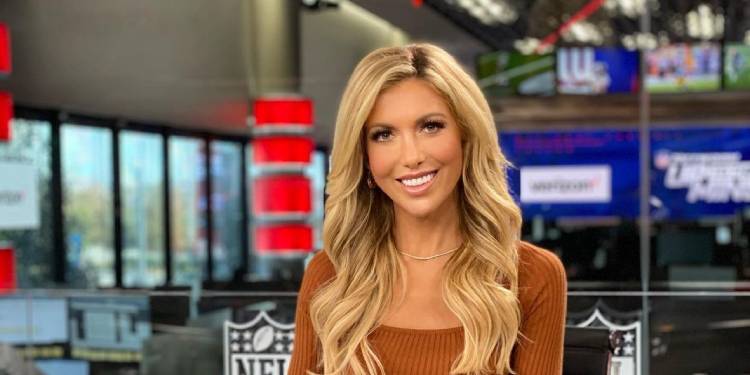 Taylor Bisciotti was born on October 5, 1991. She hails from Atlanta, Georgia, United States, and holds American Nationality. Taylor comes from a Caucasian ethnic background. Her zodiac sign is Libra.

Taylor grew up with her brother Kyle Bisciotti. However, her parents are yet unidentified. From an early age, she took an interest in football. Her uncle, Steve Biscotti, was the majority owner of the Baltimore Ravens.

Steve and Taylor were very close, and he supported Taylor when she took an interest in sports. She describes her uncle to be her inspiration. Taylor Bisciotti attended the University of Georgia and graduated with a double major in Broadcast Journalism and Business Marketing.

Taylor Bisciotti is a beautiful woman with blonde hair and light brown eyes.

After her graduation, Taylor Bisciotti began her career as an intern in WUSA9 in Washington D.C. As an intern, she struggled with what to do in the future. Later she covered a sports journalism part and soon realized what she wanted. She found her passion covering sports journalism.

Taylor’s promotion to the mainstream leagues got her experience reporting in the National Leagues. The sports fans and the general public gave her a lot of admiration after watching her broadcasts. Determined to make something happen, Taylor joined Sporting News Reporting Media, working as a host. Taylor interviewed many stars, primarily WWE and NFL stars. Her work led her to places and people she only saw on TV.

Taylor covers every live game, appears on NFL commentary shows, and interviews football stars off the pitch. After the interviews, she joins Cynthia Frelund and Adam Rank for ICYMI: All 32. The show covers the highlights and commentaries of NFL games. In addition, she also anchors a segment titled Up to the Minute. The segment continues with Taylor giving details on NFL combines and drafts, player status, and other NFL news.

The beautiful blonde anchor is not married yet. However, Taylor has previously been in a relationship with Brian McFayden. Brian was also a media personality and former host of TRL, an MTV production. The pair started dating in June 2015 and separated in June 2016.

While Taylor Bisciotti was dating Brian McFayden, Brian posted several pictures with Taylor until June 2016. Then, the posts stopped entirely as a result of the breakup. The reason why the duo separated is yet unknown.

Taylor Bisciotti is an active social media user. Taylor is available and verified on both Instagram and Twitter.

The blonde goes by @taylorbisciotti on Instagram with 71.5k followers and @TaylorBisciotti on Twitter with 48.9k followers. She shares her experiences and her lifestyle pictures on her Instagram. She also posts clips from reporting in the games.

Taylor Bisciotti is a talented and beautiful anchor and reporter on the NFL Network. However, her profession is the primary source of her income and earnings.