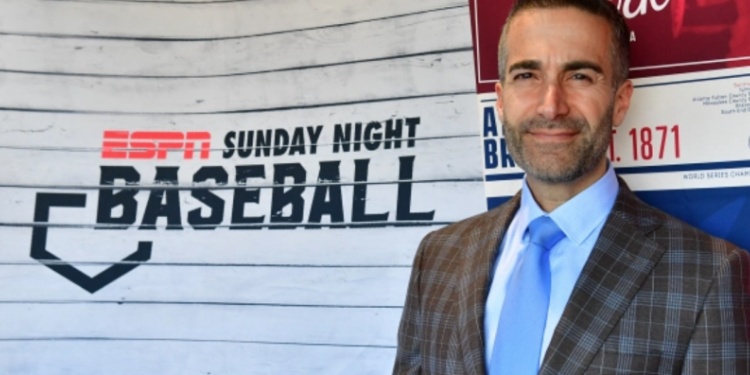 Matt Vasgersian is an American sportscaster and television host. As an announcer, Matt often makes appearances on events like MLB Tonight, Hot stove, Thursday Night Baseball, and on special events.

Born on September 28, 1967, Matthew Edward Vasgersian is the son of Ed Vasgersian – the actor. Matt holds American Nationality and citizenship. Matt Vasgersian was born in Oakland, California, and raised in Moraga, California, and of Armenian descent. He is of white ethnicity. As of 2021, Matt is 54 years old. Matt’s birth sign is Libra.

Matt Vasgersian started as a child actor at the age of seven and became a member of the Seven Actors Guild. Filmed mostly in Berkeley, California, he appeared in an episode of The streets of San Francisco and a movie. Matt graduated from Campolindo High School in Moraga and went to Los Angeles. Matt has attended the University of Southern California and graduated. While attending the University, he appeared on The New Dating Game and Supermarket Sweep. Later, he left acting and started working in baseball broadcasting.

Matt Vasgersian began his career as a broadcaster in the baseball industry in 1991. He initially started as a play-by-play in the minor leagues. He started sportscasting covering the Chicago Cubs Rookie league on station WKEE-AM 800 and was the voice of the High Desert Mavericks on broadcast KAPL. Eventually, he made his way up in the minor leagues, working for various clubs including the Syracuse Chiefs, in 1995, and ended with the AAA Tucson Toros in 1996.

In 1997, at 29 years old, he became the play-by-play voice for the Milwaukee Brewers and worked there until 2001. Later, he worked for the San Diego Padres for the same role from 2002-08. Matt joined the MLB Network in 2009 as its first studio host having worked for seven seasons for San Diego Padres.

Matt also joined FOX Sports in 2006. From 2006-08, Matt worked and covered games teaming with J.C. Pearson on FOX NFL telecasts on the network’s #6 broadcast team. In 2007, Matt also worked on FOX MLB telecast of the ‘Game of the Week’.

For the MLB Network’s Thursday Night Baseball, Matt calls play-by-play throughout the MLB regular season. From 2012-14, he hosted Fox’s MLB pregame. Therefore, he didn’t host any program on MLB Network. On April 6, 2015, as a co-host, Matt joined Mark DeRosa and Lauren Shehadi on the show MLB Central. The same year, for the 2015 All-Star Game, Matt did commentary.

In addition to being a sportscaster, Matt Vasgersian has hosted many other sports and TV shows – Sports Genius, Celebrity Blackjack, and the National Heads-up Championship. On January 23, 2018, Matt became the new play-by-play for ESPN’s Sunday Night Baseball with Alex Rodriguez. Matt left ESPN on October 6, 2021.

His roles at ESPN and MLB Network, an announcement was made on Matt becoming the new play-by-play voice for the Los Angeles’ telecasts on Bally Sports West.

Matt Vasgersian is happily married to his wife, Kimberly Craig. They got married on July 20, 2013, and have been together ever since. The couple has three children – two stepdaughters and a son named Luke. Their marriage took place in Viansa Sanoma.

Their two daughters are from a previous relationship with Kimberly. In 2014, they welcomed their son Luke.

Matt Vasgersian has long worked as a sportscaster and host. A fortune is sure to have accumulated. Matt’s net worth is estimated to be $1.5 million.