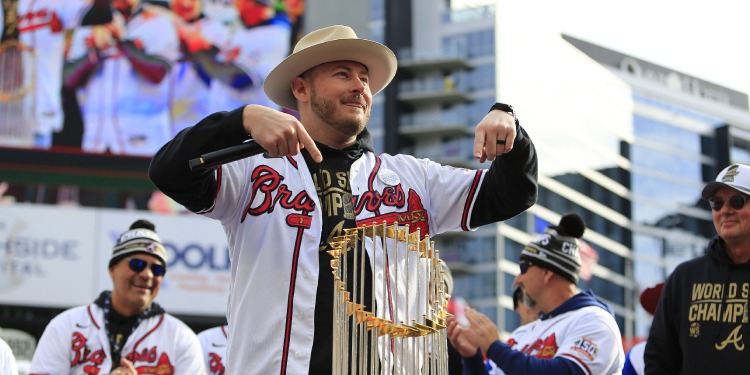 Tyler Alexander Matzek, professionally known as Tyler Matzek, is an American professional baseball pitcher. Matzek is a left-handed pitcher and batter for the Atlanta Braves of Major League Baseball. He played for the Colorado Rockies before getting drafted in the 2009 MLB draft.

Tyler Matzek attended and graduated from Capistrano Valley High School. In his high school years, he played baseball with Kyle Hendricks. In his senior year, he struck out 102 in 86 2/3 innings pitched with an 0.97 ERA (Earned Run Average). He earned him the CIF Orange County Player of the Year. Later, the Colorado Rockies drafted Matzek in the 2009 MLB draft.

You may also want to know about McKenzie Marcinek.

For a signing bonus of $3.9 million, Matzek joined the Colorado Rockies on August 17, 2009. Baseball America ranked Matzek as the 23rd best prospect before the 2010 season. Matzek gathered a win-loss record of 5-1 with a 2.92 ERA and 88 strikeouts while playing for the Single-A Asheville Tourists. However, his biggest challenge became control, walking 62 and hitting four batters. After the 2010 season ended, Baseball America ranked him 32nd best prospect.

Tyler Matzek was a mid-season All-Star in the California and Texas League. He pitched for the Double-A Tulsa Drillers in 2013. Before the break, he compiled 3-6 with a 4.04 ERA. However, the game after the break was better than last year. The 2013 season ended with the Drillers 8-9 with a 3.79 ERA, striking out 95 and walking 76 in 142 1/3 innings. When Matzek was pitching for the Salt River Rafters of the Arizona Fall League, he went 1-1 with a 3.86 ERA and a 1.457 WHIP in 10 games of relief. His performances earned him the selection to the AFL Fall Star Games.

On November 20, 2013, he was on the list of the Rockies 40-man roster. Matzek started off the new season with the Triple-A Colorado Springs Sky Sox. After making 12 starts, he promoted the significant leagues, gathering 5-4 with a 4.05 ERA. On June 11, 2014, he got promoted to the Colorado Rockies. Matzek made his debut, replacing Eddie Butler. He got an 8-2 victory against the Atlanta Braves. On September 5, 2014, he got his first career complete-game shutout. The season ended with Matzek winning six games while losing 11 in 19 starts.

Later, Matzek was sent to Triple-A due to control problems. Tyler was out of the roster at the end of the season. After the season, Matzek signed several contracts but was always released. Matzek didn’t get to play in the major leagues until 2020. Then, the Atlanta Braves purchased the contract and promoted Matzek to the Gwinnett Stripers. In 2020 he was 4-3 with a 2.79 ERA in 21 relief appearances. Matzek was a relief pitcher in game 6 of the 2021 NLCS and won the title with two perfect innings and four strikeouts.

Tyler Matzek is married to Lauren, his girlfriend from high school. The duo has been together since high school. Later in 2017, his wife underwent treatment for cancer. Lauren convinced Matzek to continue his career as a baseball player.

Tyler Matzek is very active on social media. He is verified on Instagram with 38.2k followers and shares his pictures with his wife, career, events. He goes by @tamatzek on Instagram and @TylerMatzek on Twitter. On Twitter, he has 18.1k followers.

You may also want to know about Brianna Hammonds.

Despite the yips, Tyler Matzek has become a professional baseball player. His income source comes from his profession as a baseball pitcher. According to arealnews.com, his net worth is approximately $1 million.

For more biography about your favorite Baseball player, please check out Sportscovering.