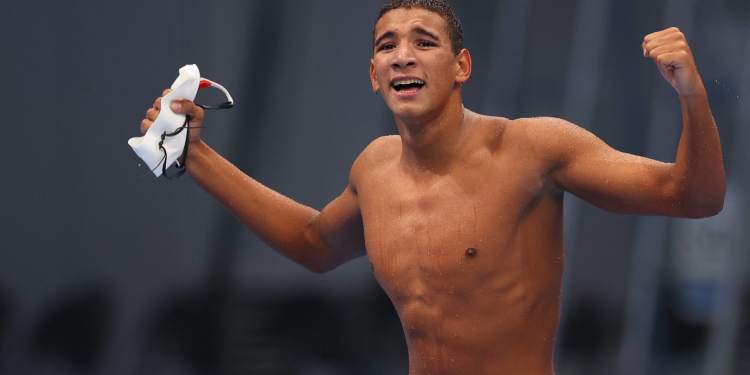 Ahmed Hafnaoui is a great swimmer and has won multiple awards including a gold medal in the 2020 Summer Olympics. This is really impressive because Hafnaoui is the only swimmer from Tunisia who has won the gold in 400m freestyle at Tokyo Olympic.

The swimmer also has won tons of African Championships in freestyle swimming held in 2018. Besides, Ahmed Hafnaoui is currently representing his nation “Tunisia”. His dedication to swimming at a young age makes him a successful swimmer right now.

Ahmed Ayoub Hafnaoui was born on 4 December 2002 in Tunis, Tunisia. Hafnaoui’s father’s name is Mohamed Hafnaoui who was also an athlete person. He is a national basketball player in his hometown Tunisia. Besides, Mohamed is also very proud of his son for winning the game in the Olympics and as a swimmer.

He learned his first swimming technique from his father in his hometown of Tunis, Tunisia.

When Ahmed Hafnaoui was 12 years old, he first joined the national Swimming program in Tunisia. He has a passion for swimming from the beginning and his dream is to be the best swimmer in the world.

After his first swimming event, Hafnaoui didn’t look back and continued practicing his swimming skills even more. Once he found out that his techniques are improving then he starts to participate in a big events in various countries.

Ahmed Hafnaoui is currently 18 years old. He will be soon turning 19 incoming December 2021.

Ahmed Hafnaoui started his career in swimming from his hometown Tunisia. He joined tons of local-level Men’s swimming competitions.

Moreover, Ahmed Hafnaoui also participates in World Championships Short Course held in Hangzhou, China. During that event, his overall competition wasn’t quite good according to his plan. But still, he manages to secure 19th place in 400m freestyle by 3:45.98 and 17th place in 1500m freestyle by 15:02.25.

Apart from that, Ahmed Hafnaoui next decided to participate in the 2020 Summer Tokyo Olympic event in Japan. His time was actually good during the whole swimming event where he came 1st in 400m freestyle in just 3:43.36 and wins the gold medal.

The amazing part of the Tokyo Olympic swimming event is that Hafnaoui is the 3rd swimmer in the whole world who picked the gold medal in the slowest qualifying 8th lane. It was really amazing to see Hafnaoui using his best skills and technique to overcome the longest swimming lane.

Till now we can’t find an actual source or news of Ahmed Hafnaoui’s relationship or any past dating history. So, we can say that he might be single and only focus on his swimming career.

We didn’t have actual data on Ahmed Hafnaoui Net Worth. But he participates in Olympics so a gold medalist swimmer makes an average of around $38,500 annually.

Ahmed Hafnaoui is also quite active on social media platforms. He has over 83.7k followers on his Instagram account.