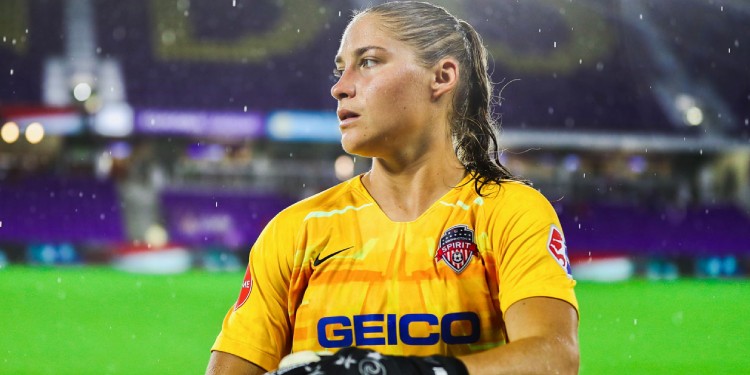 Aubrey Renee Bledsoe, known as Aubrey Bledsoe, is an American professional soccer player. She plays in the goalkeeper position for the Washington Spirit in the National Women’s Soccer League and Sydney FC in the Australian W-League. In 2019, Bledsoe received the NWSL Goalkeeper of the Year.

Born on November 20, 1991, in Cincinnati, she is the daughter of Paul and Char Bledsoe. Bledsoe holds American Nationality and is of white ethnicity. Stand at 5 feet 9 inches. Also, she is Christain by religion. Her birth sign is Scorpio. Bledsoe was born and raised with her twin sister Amber Bledsoe and her younger brother Micah. Her sister Amber is also a goalkeeper, and her brother also plays football with South Georgia Tormenta FC in the USL League.

Aubrey Bledsoe attended St. Ursula Academy. In 2007 and 2008, she was a state championship soccer team member. Bledsoe has a degree in health and exercises science and minors in chemistry and biology. She graduated from Wake Forest University.

Bledsoe’s games began during her four seasons with the Demon Deacons. In her senior year, she was named co-captain. During her years in the university, she holds records for 33 shutouts, 8,692 minutes played in the game, 94 games played and started, and 0.91 goals against average. In the Demon Deacons, she is one of the three named an All-American three times. For such feats, she earned third-team honors from the NSCAA in 2011 and 2012. The following year, she earned second-team honors.

Aubrey Bledsoe took every opportunity she could get. Bledsoe signed for USL W-League side, Los Angeles Blues, in January of 2014, which allowed her to explore Europe. After securing a move to Norway, she played for the Toppserien club, IK Grand Bodo, where she made 11 appearances. Bledsoe signed with Sky Blue FC as a discovery player in October 2014. As a substitute keeper in the 2015 season, she only appeared once for Sky Blue.

At the end of the 2015 season, she secured an off-season loan to Danish club Fortuna Hjorring of the Elitedivisionen. Bledsoe made four appearances while competing in the UEFA Women’s Champions League, where she won 2 matches, lost one, and ended in a draw. On November 2, 2015, Orlando Pride selected Bledsoe as their 10th pick in the NWSL expansion draft. During the 2016 season, she made only one appearance. In the 2017 season, following the injury of Ashlyn Harris, Bledsoe made 11 appearances, earning five wins and two clean sheets.

In exchange for a Canadian defender, Orlando traded Bledsoe and a 2019 first-round draft picked to Washington Spirit in January 2018. For weeks 11 and 12, the NWSL Media Association named Bledsoe Player of the Week. In the same week, she had back-to-back shutouts and saved a penalty. In addition, Bledsoe broke the NWSL league-leading Save record. In September 2018, she re-signed for the 2019 season of the Washington Spirits. Bledsoe won both NWSL Player and Save of the Week in the 4th week of the 2019 NWSL season.

Following the Covid pandemic, the NWSL organized a closed-door NWSL Challenge Cup in the summer and an NWSL Fall Series later on. The Spirit lost to Sky Blue FC. In the Fall series, Bledsoe made 12 saves out of 16 shots. In Washington’s 87th game against Chicago Red Stars, Bledsoe prevented the Red Stars from taking the lead and won the game thanks to Jessie Scarpa’s 92nd-minute goal.

Aubrey Bledsoe got engaged to former world-class athletic trainer Matthew Kingsbury. Aubrey & Matthew had been dating for some time and not until recently got engaged. Her partner, Matthew Kingsbury, has worked with Hilltop’s women’s rowing squad and mens’ soccer team. In addition, she has a nephew, thus becoming an auntie.

As an American professional soccer player, Bledsoe has a net worth estimated at $1 Million – $5 Million. Bledsoe’s source of income comes from being a successful athlete.