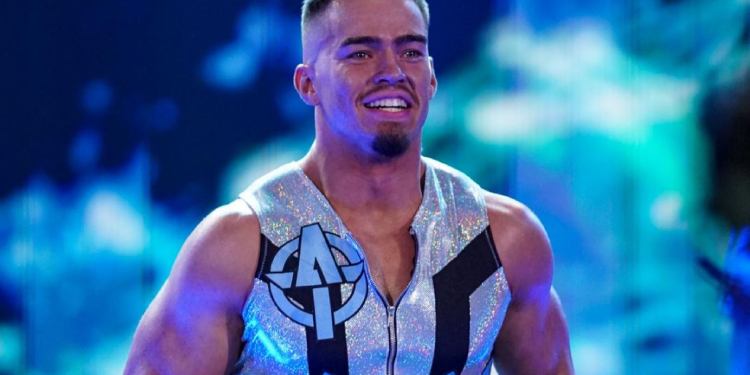 Austin had already been wrestling on the independent circuit before signing to WWE. However, it didn’t take Austin too long to become a superstar.

Born on August 2, 1997, in McDonough, Georgia, Austin holds American Nationality and white ethnicity. Austin was born and raised in Melbourne by his parents. In 2015, at the age of 17, he won a bodybuilding championship.

Austin Theory has not shared any information regarding his early childhood besides winning the bodybuilding championship. Additionally, no statement regarding his education or family is available.

Austin began his professional wrestling career on May 5, 2016, under the stage/ring name Austin Theory. Austin won the WWA4 Heavyweight Championship defeating AR Fox. On April 1, 2017, he continued with his wrestling career at Progress and Evolved joint show. Austin lost in a four-way match against Keith Lee, Jason Kincaid, and Blaster McMassive. Again on August 12, Austin lost to Mark Haskins in another four-way round.

On August 12, 2016, Austin, alongside AC Mack, made his World Wrestling Network debut at Full Impact Pro (FIP)’s Heatstroke. On January 1, 2017, AR Fox defeated Austin at Style Battle. After defeating Anthony Henry at FIP Everything Burns, Austin made his Evolve debut at Evolve 78 by defeating Darby Allin. Austin Theory kept pushing forward even after the ups and downs. He won the WWN Championship defeating Keith Lee at Evolve 103, ending Keith’s 175-day reign. At Evolve 117, he won the Evolve championship and lost the tournament at Evolve 139 on November 9, 2019.

Before signing with WWE, Austin participated in a WWE tryout in February 2018. On August 15, 2019, he officially signed a contract with WWE and made his ring debut on NXT against Roderick Strong on December 25. Austin achieved his first victory by defeating Joaquin Wilde on January 8, 2020.

As an associate of Zelina Vega, Austin showed up on Raw on March 30. Austin teamed up with Angel Garza and Seth Rollins to defeat Kevin Owens, Angelo Dawkins, and Montez Ford. Ultimately, Austin and his team lost. Austin teamed up with Garza again on Wrestlemania 36 to challenge The Street Profits for the Raw Tag Team Championship, which they lost. They lost again in the rematch for the championship.

On August 26, in NXT, Austin Theory made a return by interrupting Bronson Reed. After this, Austin went against Reed and lost. Austin kept losing his matches to Kushida, Dexter Lumis, and others. After helping Johnny Gargano win the NXT North American Championship for a record-setting third time, he revealed the newest member of the Gargano Family at NXT TakeOver: War Games.

In October 2021 Draft, Austin returned to Raw and attacked Jeff Hardy. Next week he defeated Jeff Hardy and feuded with The Mysterios. Defeating Dominik Mysterio in a singles match and following up by defeating Rey Mysterio in a disqualification win, making it a four-win streak.

Austin’s primary source of income is his profession as a professional bodybuilder and wrestler. His net worth is estimated to be from $1 million to $5 million. Austin Theory prefers to live a modest lifestyle given his earnings.