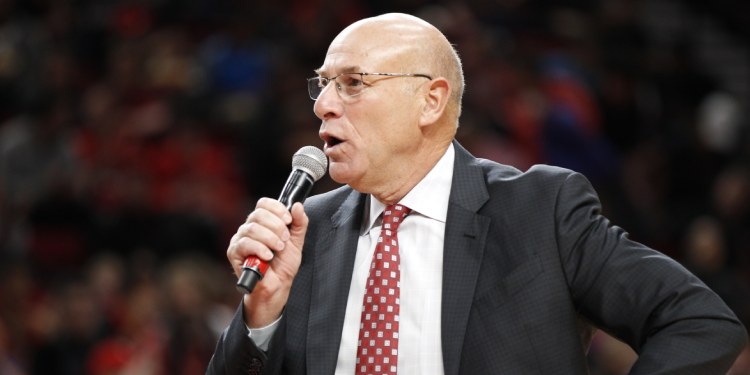 Kevin Calabro is an American sportscaster mostly known for his work in NBA basketball. Calabro used to voice in the former Seattle Supersonics NBA franchise. In addition, the Seattle-based play-by-play sportscaster announced collegiate football, basketball, and MLS Soccer. After stepping down to be with his family and to avoid COVID in 2020, he rejoined the Portland Trail Blazers for the 2021-22 season as a play-by-play Voice.

As a pet lover, Calabro said, “We love dogs and cats equally, but they are different; our dog of 15 years, Buck, passed a couple of years ago. Broke our hearts.”

Born on June 27, 1956, Kevin Paul Calabro is a sportscaster based in Seattle, Washington. However, his birthplace resides to be Indiana. The 65 years-old Seattle based sportscaster holds American nationality and white ethnic background. In 1974, Calabro graduated from Ben Davis High School in Indianapolis, Indiana. Before graduation, as a student, Calabro called on the high school basketball games in Indiana on WBDG.

After graduation, he enrolled at Butler University. For four years at the university, he called Butler Bulldog Basketball before graduating in 1978.

Kevin Calabro is a well-known sportscaster. After graduation in 1978, Calabro continued calling on basketball games. He further called on games in Central Hockey League for the Indianapolis Checkers. He also called basketball games at Purdue University and the University of Missouri.

In many games by Microsoft, he lent his voice. He voiced in games including NFL Fever, NBA Inside Drive, and NBA Full Court Press. For the 2008-09 season, he had an option with the Supersonics, courtesy of reaching a milestone 1500 games in 2006. However, on April 11, 2008, the team decided to relocate to Oklahoma City, which they did. Calabro left the group after its relocation to Oklahoma City. During Calabro’s one season with the Seattle Supersonics, he covered Kevin Durant. After that, the team relocated to Oklahoma City.

You may want to know Taylor Rooks.

In 2016, Calabro received an award for the 2016 Keith Jackson Western Sports Star of the Year. In the first year of Seattle founders FC, Calabro became the lead play-by-play personality. It was a Major league Soccer franchise. Recently, Calabro lent his voice as a play-by-play to the Sony Playstation NBA game franchise. Calabro has served and worked on the national level with TNT, TBS, ESPN Radio, and NBA TV.

Kevin Calabro is married to his wife, Sue. The couple has been together for 39 years as of 2021.

The duo has four children and currently resides in Seattle. Their daughter-in-law also lives nearby.

You may want to know Kayce Smith

The veteran announcer or sportscaster of Seattle Supersonics has an estimated net worth of $2 million. He is one of the wealthiest sportscasters and ranked in the elite list of celebrities born in the states.

In 2006, Calabro and his wife bought a house on Lake Chelan’s Southshore and had owned it ever since.