Who is Franz Beckenbauer?

Franz Beckenbauer is a former professional footballer from Germany. He is currently active in the administration role of the football team. Franz had played a vital role in making the national team of Germany a lot of tournaments. Franz is regarded as one of the legendary footballers of Germany. He used to play from the “left-winger” position in the beginning and then took the responsibility of the “attacking sweeper” position. The shifting of his position changed the gameplay of both the “Bayern Munich” and the national team of Germany. He had also taken the responsibility of the captain in the club “Bayern Munich.”

Franz Beckenbauer even contributed for the team to win the “European Cup” three times from 1974 and 1976. Franz was also the captain of the national team of Germany when it won the “World Cup” in 1974. He was also the manager of the team in 2010. The same year, the team won the “World Cup.” He had also earned the “European Player of the Year” two times in his professional playing career.  Franz has also been in the reputed position of the advisory board for the club of “Bayern Munich.” This also helped the club to enjoy great success. Franz also played a significant role in making the national team of Germany win the “World Cup” in 2006.

The birthplace of Franz Beckenbauer is Munich, Germany. He came into the world on September 11, 1945. His father’s name is Franz Beckenbauer Senior. He was working in the post office. His mother’s name is Antonia Beckenbauer. The economic condition of the family was not very strong. And World War II had badly affected the economy of Germany. Franz even faced the discouragement of playing football.

Despite a lot of challenges, the passion for football remained the same. He fell in love with football at a young age. Franz joined the club “SC Munich” in 1954. He was only nine years old. Franz used to play from the “forward” position during that time. He wanted to join the senior team of the club. But he dropped the hope after he had a dispute with a player during his youth time. Then, Franz joined the football club “Bayern Munich” in 1959.

Franz Beckenbauer started his professional career from the senior team of the “Bayern Munich” in 1964. He also contributed to taking the team to the first division “Bundesliga.” It was during the end of the “1964 season.” Franz represented the national team of ‘West Germany” in the World Cup in 1966. The team succeeded to completed the tournament with the position of the “runner-up.” Franz had succeeded in scoring four goals in the tournament.

Likewise, after his successful performance from the “Left Winger,” he started playing from the position of an “attacking sweeper.” He took the new responsibility of the club “Bayern Munich” in 1968. The club also won the league by the end of the “1968 season.” This was just the beginning of the success of the club. It also won league titles three times continuously from 1972. The team also succeeded to bag three “European Cup: three times in a row during the same phase. He represented the club in the “439 matches” for the club “Bayern Munich.” Franz also succeeded in scoring 64 goals during that time. He also got the nickname “Der Kaiser” (The Emperor).

Moreover, Franz Beckenbauer scored all the significant goals in the match against team “England” in round two of the “1970 World Cup.” Team Germany failed to clear the semifinals in the tournament. He also took the captainship of the team during the “European Championships” in 1972. He was responsible for making the team win the “World Cup” in 1974. The team also became the “runner-up” in the “European Championships” in 1976. He ended his journey as an international player in 1977. Franz had succeeded in scoring a total of 14 goals for the national teams in 103 appearances. 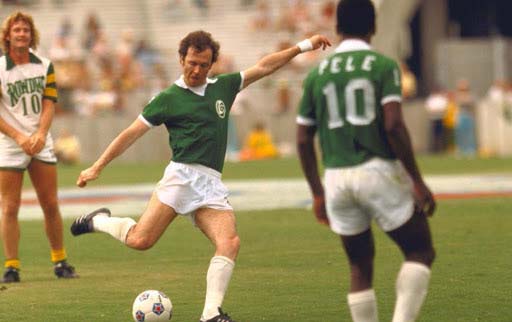 Franz Beckenbauer succeeded in taking the team to the finals of the West Germany” in 1986. He was also responsible for making the united “Germany: won the World Cup in 2000. His playing potential and the managing idea were fruitful for the team. He also became the manager of the “Olympique de Marseille.” Franz became the “Interim Manager” of the team “Bayern Munich” in 1993. The team also won the “league” title by the end of the season. He also helped the team reach the “UEFA Cup” during his position as a “Stop Gap Option” in 1996.

Franz Beckenbauer tied knots with Brigitte in 1966. Unfortunately, the couple ended their marriage legally in 1990. The couple is the parents of two boys. They are Stephen and Michael. Stephen was a footballer, but he passed away due to an illness. Franz married again with Sybille in 1990. But the marriage again ended in 2004. The couple is the parents of a son, Thomas. Franz tied knots with Heidi Burmester in 2006. They are blessed with two children. They are Francessca and Noel.

Franz Beckenbauer has been part of the football fraternity for more than fifty years. According to celebritynetworth.com, he has an approximate net worth of $10 million.


The full name of Franz is Franz Anton Beckenbauer. His current age is 75 years. The nationality of Franz is German. He has an attractive height of 5 feet 11 inches along with a complimentary weight of 75 kg. Franz belongs to the German ethnicity.