George Kittle’s full name is George Krieger Kittle. He was born on 9th October 1993 in the capital of Wisconsin state called Madison. Thus, his nationality is American. He grew up in Iowa City where he joined Iowa City West High School located in Cedar Falls of Iowa. Later, George Kittle transferred to Norman High School located in Norman of Oklahoma where he finished his high school.

He always had an interest in football; thus, he joined the University of Iowa for football, where he graduated from his college career. His parents are Bruce Kittle (father) and Jan Krieger (mother), and he also has a sister named Barbara, who was a basketball player. His father is a former football coach at the University of Iowa. 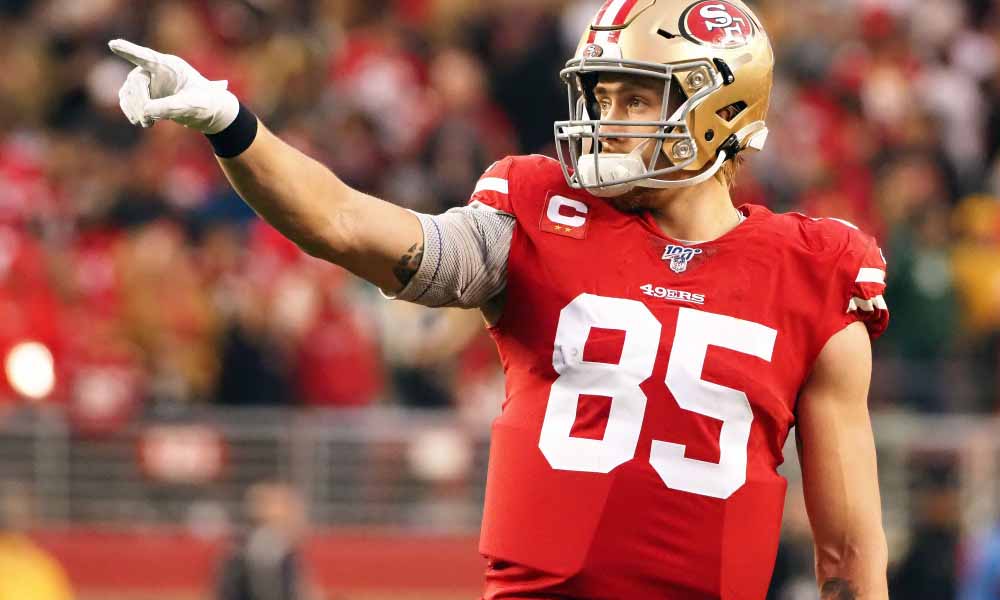 His college career started from the year 2012 after joining the University of Iowa. There he had a coach named Kirk Ferentz. During his early year at university, he had a small and limited role in the game as he had senior players C. J. Fiedorowicz, Ray Hamilton, and Jake Duzey respectively above him. His first game was against Missouri State Bears where he made 47 yards reception and was able to make five passes catch in 108 yards.

In 2014 seasons, he was not able to play, and his roles in the game kept decreasing as his two seniors were added in the game. He was only able to play in the 2015 seasons where he made his first touchdown against North Texas in a 43-yard reception with C. J. Beathard as a quarterback. During the whole season, Kittle scored six receiving touchdowns, and in 290 passing yards, he scored 20 receptions.

After graduating from his college in 2016, he invited to the city of Indiana called Indianapolis by the NFL Scouting Combine. He was one of those 19 college tight ends players to get an invitation from NFL Scouting Combine. In the test, he performed well. In broad jump, George Kittle was able to come in the third position among other tight ends, and in the 40-yard dash, he went in the fifth position and finally sixth in the vertical jump among other tight ends. 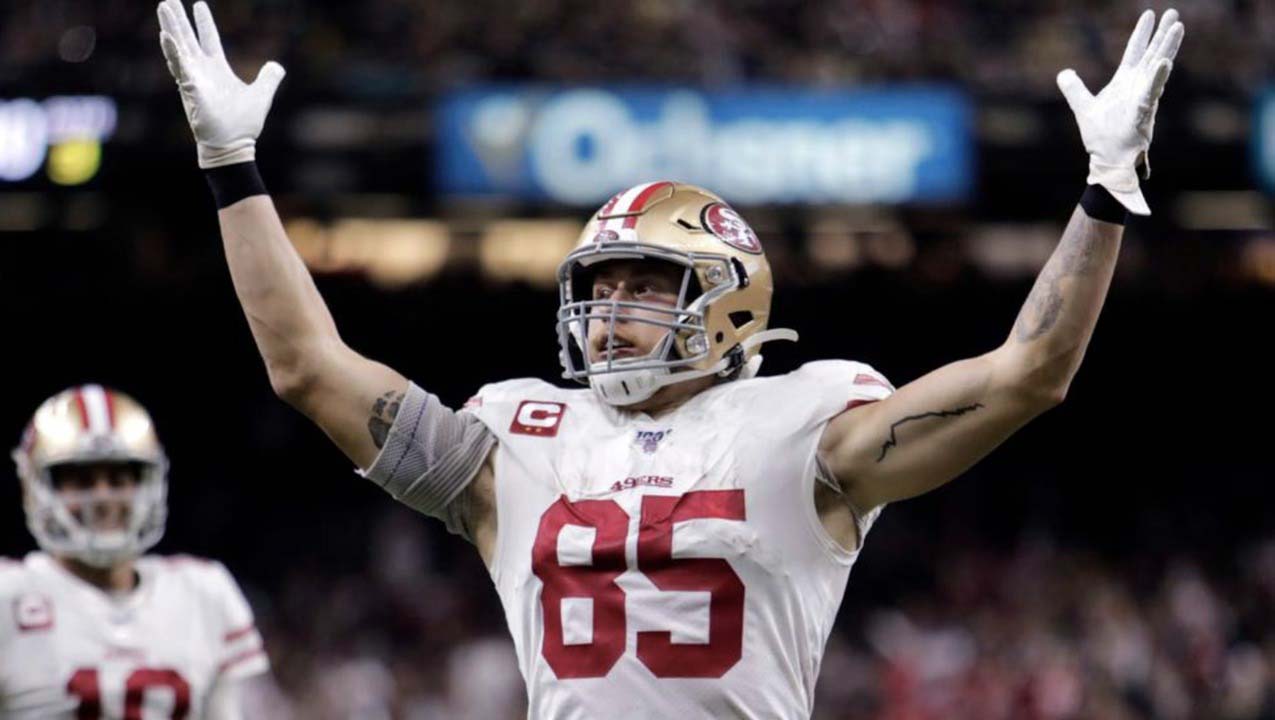 He also joined in Iowa’s Pro Day along with other players like C. J. Beathard, Jaleel Johnson, Riley McCarron, etc. on 27th March of 2017. In the test, he finished short shuttle in 4.55 seconds and completed his three-cone drills and positional drills finishing his all combine drills. The competition was attended by all the team representatives and scouts from 32 NFL teams including the coach of Cincinnati Bengals, Jonathan Hayes. George Kittle was ranked in the fifth position among other tight ends by Mike Mayock who was an NFL analyst and another NFL analyst, Gil Brandth ranked him sixth-best, and finally, NFLDraftScout.com ranked him as the eighth-best among other tight ends.

The San Francisco 49ers chose kittle in the 2017 NFL Draft in the fifth round of selection. He signed a 4-year contract with 2.69 million dollars and a bonus of 298,287 dollars. Kittle’s NFL debut was against the Carolina Panthers in the season opener of San Francisco 49ers. The team lost with 23-3 points where for 27 yards George Kittle was able to catch five passes. He also saw his first reception from Brian Hoyer even his first NFL reception on the first drive.

During the opening of the 2018 season, the team lost against Minnesota Vikings by 24-16 points where for 90 yards, George Kittle made 43 receptions. In the following Week 4, the team again lost against Los Angeles Rams where he made one touchdown and for 98 yards, five receptions. In Week 14, Kettle made the franchise record of 210 reception yards in the first half against the Denver Broncos, and also George became the first tight end of the team surpassing 1000 receiving yards. Again, the following week, he broke the record of tight end Travis Kelce by making 43 touchdowns in less than an hour of Kelce’s record against the Rams.

During the 2019 season, George Kittle achieved the highest Pro Football Focus grade in NFL which any other players have achieved in the first four weeks of the season. The first week was against Tampa Bay Buccaneers, second with Cincinnati Bengals, and third was against Pittsburgh and Cleveland Browns. The team had straight victory over the Los Angeles Rams where George Kittle made the first touchdown of the season and for 70 yards he made six receptions against the Browns.

George Kittle also made eight catches for 103 yards against the Rams. Later on, he missed his two games because of his injury and again played and won against Green Bay Packers by 37-8 points. Also, the team won against New Orleans Saints by 48-46 points, and finally, the team lost against Atlanta Falcons where George Kittle was able to catch 13 for 134 yards. He was named the second Pro Bowl getting the votes of over 340000. The team again lost against Kansas City Chiefs by 31-20 in Super Bowl LIV.

In 2020, George Kittle signed the five-year contract with the same team worth of 75 million dollars which made him the first tight end player to be highest-paid. 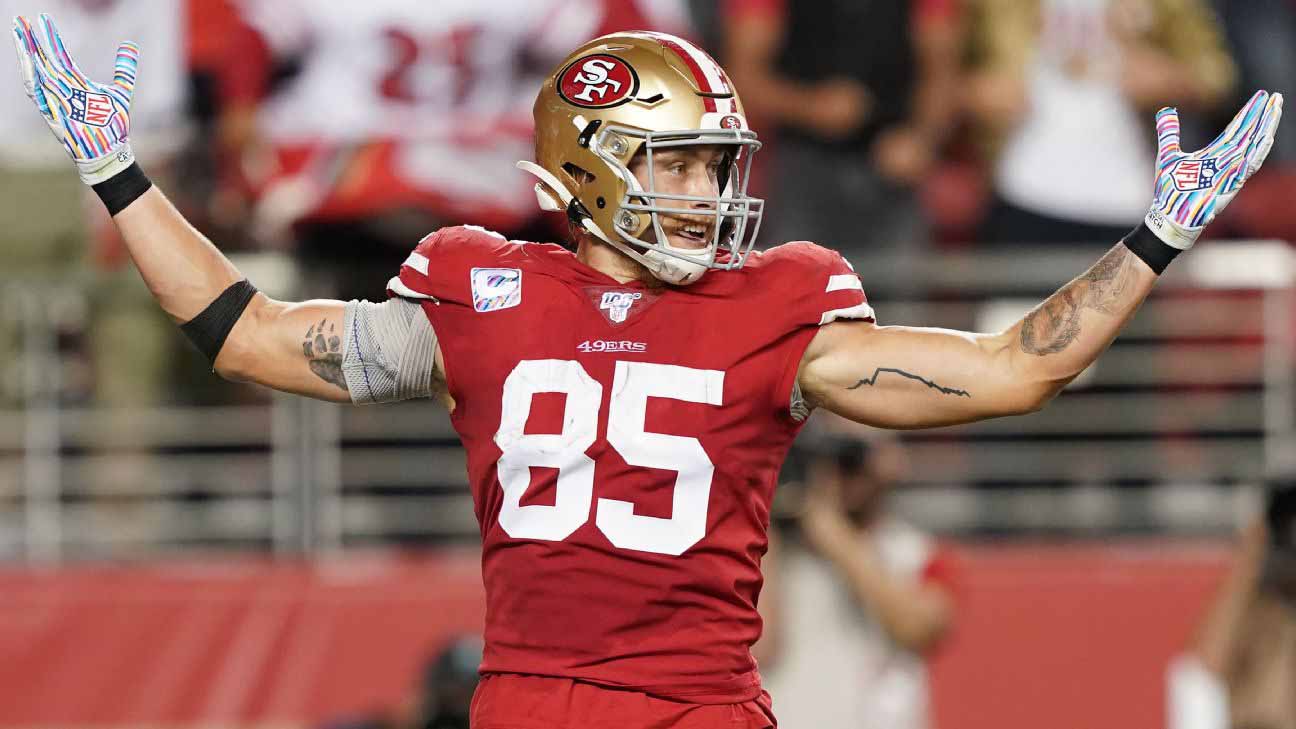 Kittle is committed to his wife named Claire Till now Claire Kittle. They were married on 19th April of 2019. Claire is a fitness model, and she is obsessed with a healthy and fit body. She also owns Claire Till Fitness which is a fitness training centre located in Iowa. Kittle and Till met early during their time at the University of Iowa where Till used to play basketball.