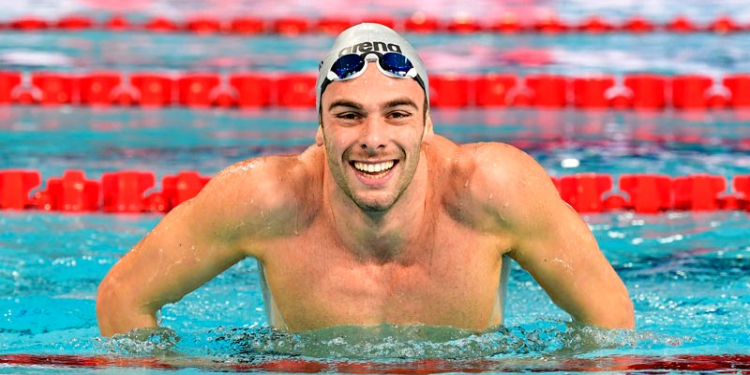 There are many successful and popular swimmer in the world who puts their skills to reach the top and one of them is Gregorio Paltrinieri. He is an Italian freestyle swimmer who is a 2016 Rio Olympic champion and 2 times World Aquatics Champion (2017 and 2019). In addition, Paltrinieri was also the winner of the 2012 FINA world swimming championships.

The dedication and effort that Paltrinieri puts into his swimming make him a successful freestyle swimmer in the world right now. One thing we all should learn from the Paltrinieri is to keep fighting for your dream no matter how tough your situation is or what you are going through.

Gregorio Paltrinieri was born in September 5, 1994 in Carpi, Italy. He is the son of Luca Paltrinieri (Father) and Lorraine Paltrinieri (Mother). The swimmer gets all the love from his parents at an early age and always supports his parent’s advice.

Paltrinieri learns his swimming from the very beginning. He was always interested in swimming and watches other players on how they performed their swimming skills. Following that, he began to practice in the local swimming pool whenever he was free.

When Paltrinieri was 12 years old, he always learned to counter breaststroke. His passion for swimming and the inspiration he gets from the other swimming is the key motive of his success.

But he didn’t keep up with the breaststroke technique for a long time. Paltrinieri later switches to freestyle swimming as he grew up and targets the longer-distance pools.

Gregorio Paltrinieri first started his career as a junior swimmer by participating in the 2011 European Junior International Swimming Championships. During the event, he manages to win the gold medal at 1500m and bronze at 800m. It was the big moment of his life to achieve such a place.

Following that, Paltrinieri again competed in World Junior Championships in the same year 2011 and picked a silver medal at 1500m freestyle and a bronze medal in 800m freestyle.

A year later in the 2012 European Championships Paltrinieri beat the Hungarians Gergo Kis and Gergely Gurta in 1500m freestyle and win the event. It was the time when he was also qualified for the 2012 Summer Olympics because of his win.

Besides, in December, he once again competed in the 2012 FINA World Swimming Championships and picked a silver medal in the 1500m freestyle event after Mads Glaesner. There is a positive doping test for Mads so Paltrinieri is ready for the gold medal but later on, the test was clean and he stays with a silver medal.

Other than this, Paltrinieri also participates in the 2013 World Aquatics championships on where he won a bronze medal in 1500m freestyle (which is a new national record) in just 14:45.38. After that, he again went for the 2014 European Aquatics Championships and secures 1st place in 800m and 1500 m freestyle events. At that time, Paltrinieri becomes the 5th swimmer who has completed in the 1500m in just 14.39.93 time.

Furthermore, Paltrinieri was also a silver medalist of the 2015 World Aquatics Championships held in Kazan. Later on the same year at the 2015 European short Course Swimming Championships, he defeats Gabriele Detti and picked a gold medal at the 1500m freestyle event.

Gregorio Paltrinieri competed in his first-ever 2012 Summer Olympic is just the age of 17. During the event, his performance was excellent but he didn’t win the event and still secure 5th place in the finale.

In the recent 2020 Summer Tokyo Olympics, Paltrinieri had to deal with glandular fever and reduce his training. Despite that, he still manages to pick a silver medal in 800m freestyle and a bronze medal in the 10km open water marathon.

Gregorio Paltrinieri is now currently in a relationship with his long-time girlfriend Letizia Ruoli.

Gregorio Paltrinieri is a successful freestyle swimmer. His net worth is estimated around at $3 million.