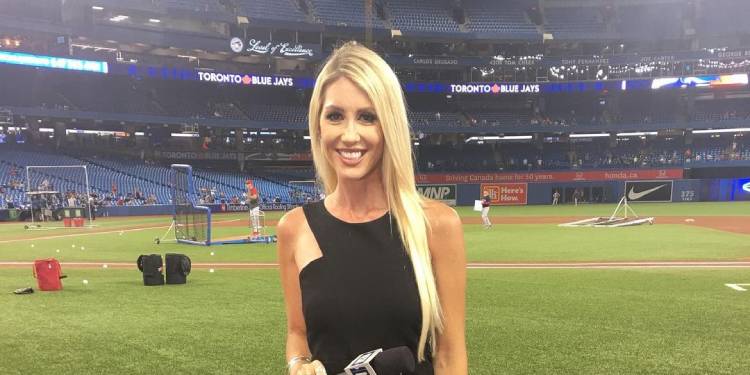 Guerin Elizabeth Austin or Guerin Austin, best known for her work at Boston Red Sox games, is a model, television host, and beauty queen from Bellevue, Nebraska. She worked as a sideline reporter for New England Sports Network (NESN) until 2020.

Austin has also competed in the Miss USA pageant. Before departing from NESN, Austin was a fierce and powerful journalist and reporter.

On November 30, 1980, Guerin Austin was born in Omaha, Nebraska. Austin holds American nationality and comes from a white ethnic background. Her zodiac sign is Sagittarius.

Austin has not shared her parents’ names with the public. Instead, she was given her grandmother’s maiden name. However, born in Omaha, Nebraska, she grew up in Seattle, Washington. In her early years, she figure skated as she grew up in a hockey family.

Austin attended Oklahoma City University and graduated with a degree in Broadcast Journalism. In addition, she studied international media in London.

Guerin Austin grew up to be a beautiful woman, and she decided to compete in the Nebraska state pageant in 2002. However, she failed to obtain the title. Two years later, her determination got her the crown of Miss Nebraska USA. Later, Austin represented Nebraska in the Miss USA 2004; however, she did not get the place.

The Oklahoma Broadcaster’s awarded Austin while serving as a Congressional intern for Representative Lee Terry.

The 41-year-old blonde stands at the height of 5 feet 10 inches (178 cm/1.78 m) and weighs around 62 kg. The beautiful blonde has brown eyes and a slim physique. Austin’s size makes her stand out from the crowd. However, Guerin has not shared her exact body measurements.

In 2012, Austin won a Capital Emmy for hosting a documentary of the Washington Capitals season. Furthermore, she anchored the Capitals Red Line Show from 2010 to 2013.

In 2014, Austin joined the NESN after Jamie Erdahl left to become the lead college football reporter for CBS Sports Network and served as a sideline reporter covering Boston Red Sox home games at Fenway Park. Initially, she started as a rinkside reporter for hockey games at Boston Bruins.

In June 2016, Austin was caught in the middle of an exuberant Gatorade celebration due to the Red Sox’s comeback against the Chicago White Sox. Every sportscaster around the United States covered the incident. Guerin Austin faced several similar incidents while covering the Red Sox. Austin suffered a concussion during the 2017 season, leading to fainting on a flight. In addition, she was in a car accident. Later, she announced she was okay and released from the hospital.

After the 2020 baseball season, Austin did not renew her contract with NESN. In addition, in January 2021, she confirmed her departure from NESN. But, unfortunately, she has not announced what she will be doing from here on.

Guerin Austin is 41 as of 2021. However, her relationship status is yet unclear. Austin is a somewhat secretive individual regarding her personal and love life.

Her dating history is not shared with the public. Even in her socials, she has not posted anything regarding her love life. So, as of 2021, she is presumably single and not in a relationship.

Guerin Austin is an active individual on social media. She has been verified on both Instagram and Twitter.

Guerin Austin is a model and former reporter. Her primary source of income was her profession as a sideline reporter for NESN and modeling. Before leaving the network, she had accumulated a decent sum of money.

According to online sources, Austin’s net worth is estimated at around $1 million as of 2021. However, sources claim her net worth to rise in 2022.

For full biography about your favorite reporters, please check out Sportscovering.