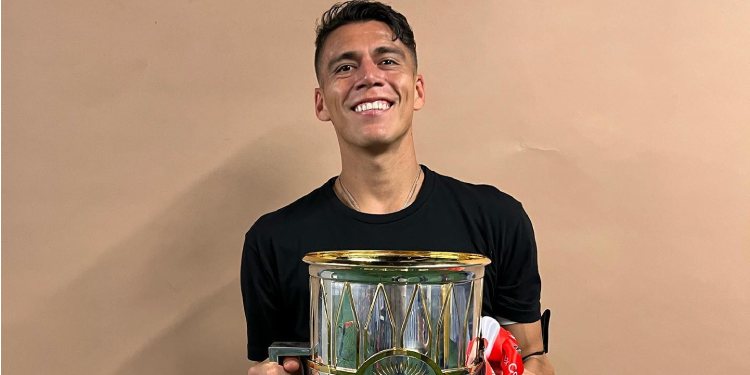 Héctor Moreno is a professional football player from Mexico who plays as a center-back for Liga MX club Monterrey and the Mexico national team.

He wears the number 15 shirt for both club and nation. He is a left-footed defender competent for creating attacks from the back.

On 17 January 1988, Héctor was born to Cesar Moreno and Alcira Herrera in Culiacán, Mexico. He is currently 34 years young, and his full name is Héctor Alfredo Moreno Herrera.

His horoscope sign is Capricorn by birth. In terms of his physical appearance, Héctor stands at 6 feet 0 inches, and he weighs around 80 kg.

Héctor rose through the Club Universidad Nacional (UNAM) youth ranks before making his senior debut in 2006 at 18. A year later, he traveled to the Netherlands to join AZ Alkmaar, where he earned his first league title.

Then, in 2011, he joined Espanyol in Spain, where he stayed for four years until joining PSV Eindhoven in the Netherlands. After that, Moreno spent a brief stay with Roma in 2017 before rejoining another Spanish team, Real Sociedad.

In 2019, he moved to Al-Gharafa, becoming the first Mexican international to play in the Qatar Stars League. Following his 2 years spell in Qatar, he returned to his homeland and signed with Monterrey as a free agent in 2021.

He assisted his nation in winning the 2005 FIFA U-17 World Cup in Peru, where they beat Brazil 3-0 in the final.

Héctor was also in the squad for the 2007 FIFA U-20 World Cup. They finished first in their group but were stopped in the quarterfinals by Argentina.

His wife is Irene Martínez, with whom he tied the knot in 2015. The couple has created a sweet family by giving birth to 3 kids, two girls, Mia and Salma, and a boy, Bruno.

Apart from his game, Héctor appears to be keeping himself busy with the family and often shares the images of enjoying life with his children and wife on social media.

His wife, Irene, is originally from Spain, as per her Instagram profile. She is a beautiful lady who could be occupied with her family duties to help her man.

But, perhaps, Irene is also busy doing some ordinary job to add extra income to the house. Currently, she resides in Monterrey, Mexico, with her sweet family.

His precise revenue is now under review. But, on the other hand, Héctor is an outstanding footballer and a beast in his defensive position.

His primary source of earning seems to be only football, and it is one of the most expensive sports in the world. Also, he has not spoken up publicly about his earnings yet.

Maybe, Héctor is too busy with the game and prefers to keep his things to himself rather than sharing them in the media. However, according to our findings, his net worth could be between $2 and $5 million.

On Instagram, Héctor has a handle @hectormorenoh with 978k followers, whereas on Twitter, his handle is @HectorMorenoh, and he maintains 1.5m followers.

Likewise, he uses Hector Moreno’s account on Facebook and has 181K followers. Follow him on these platforms to better understand his life and see his game updates.