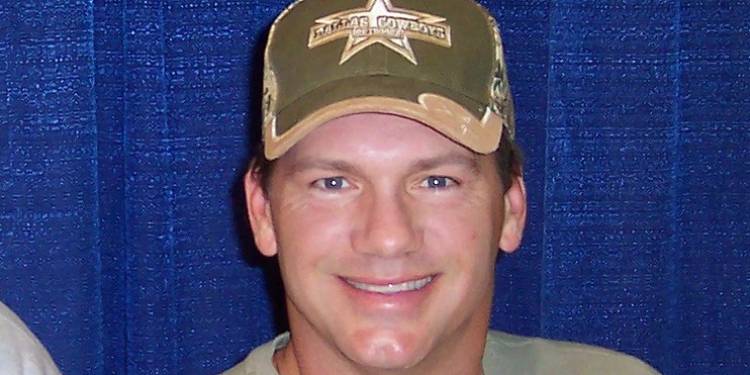 The 59-year-old former footballer is the son of Pat Novacek and June Novacek. Jay also grew up with two siblings – Jason “Bump” Novacek and Jim Novacek.

However, Jay’s exact body measurements are unavailable and under review.

Jay Novacek started playing football at high school, becoming an All-state basketball and football player. In addition, Jay was a three-sport athlete with his name in the school sports Hall of Fame.

After committing to Wyoming, Jay moved to the tight-end position. In college, he got an honorable mention in the Western Athletic Conference (WAC) and the All-American football team. Afterward, Jay ended his college career running for 1536 yards and 10 touchdowns.

Furthermore, Jay competed in the track and field, secured the WAC decathlon championship, and placed fourth in the NCAA championships. Later in 2008, Jay’s name was added to the college’s Hall of Fame.

In the 1985 NFL Draft, the St. Louis Cardinals picked Jay as the 158th pick in the sixth round. Afterward, he started playing for the Cardinals as a wide receiver. Later in 1986, his position changed to tight-end but ended up on the injured reserve list.

The following year, Jay suffered a broken elbow against the New York Giants. Later in 1990, Jay signed with the Dallas Cowboys as a Plan B free agent. In the early 1990s, Jay became the team’s offensive key contributor.

Two years later, Jay received the title of All-Pro after leading all tight ends running for 630 yards with six touchdowns. Later in 1995, Jay set a career-high of 705 receiving yards with five touchdowns and 62 receptions. The following year, Jay officially retired from the NFL due to his lower-back problems.

Throughout his career, Jay set a record of 422 receptions for 4,630 yards with 30 touchdowns.

Is Jay Novacek in a relationship?

Jay is a married individual. Jay exchanged his marriage vows with Amy Bradley. Before his marriage to Amy, Jay was married to his first wife, Leanne Novacek. Leanne and Jay shared a daughter together. However, Leanne was found dead in her bedroom with a self-inflicted gunshot wound.

Afterward, Jay met his current wife, Amy. The pair dated for a while and finally exchanged in 2010. Unfortunately, Amy was also in a life or death situation in 2013. The pair are parents to a son named Blake Novacek.

Unfortunately, Jay went through a horrific situation once again. According to sources, Blake was hit with a baseball bat when he was blindfolded, which led to him falling unconscious for 10 hours. As a result, the pair filed a lawsuit which only came to the media in 2017. Due to the incident, Blake suffers from multiple seizures.

What is Jay Novacek’s Net Worth?

Jay is a former footballer who has earned a decent amount in his years. According to sources, Jay has an estimated net worth of $5 million, with his first salary amounting to $60,000, plus a $35,000 bonus from the NFL signing.

Is Jay Novacek on socials?

Jay Novacek is an active social media user. Jay is on platforms, including Instagram and Twitter. His Instagram handle is @jaynovacek84, with a fan following of over 8k followers.

Similarly, Jay is also on Twitter as @JayNovacek84, with a fan following of 27.3k followers.

For more biography about your favorite NFL players, please stay connected with us at Sportscovering.