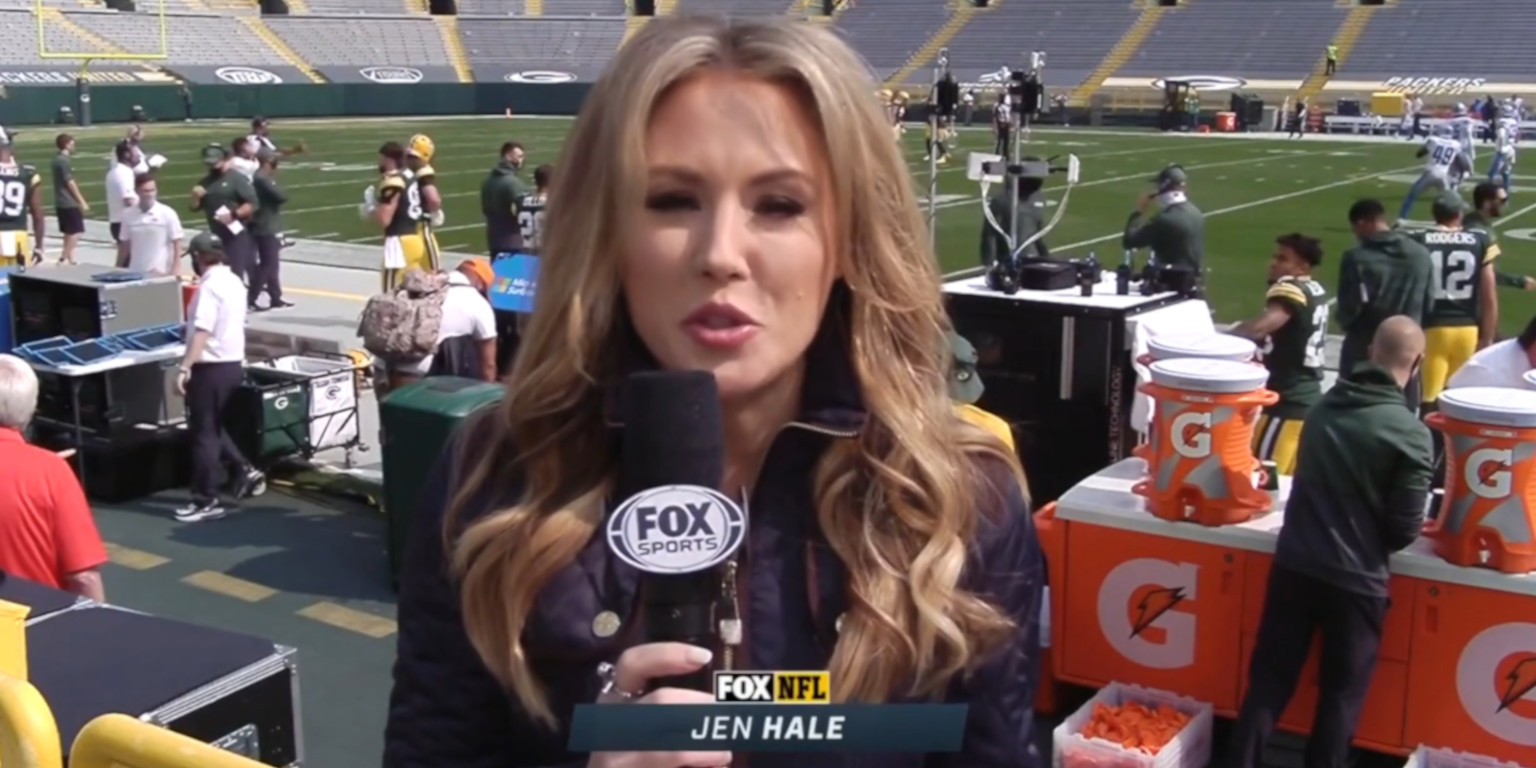 Jen Hale is an American journalist who works as the NFL sideline reporter for FOX Sports network. She also covered the NBA’s New Orleans Pelicans team and college football for the channel. She is one of the prominent journalists in the American football scene. She also hosts shows like The Basketball Tournament on ESPN.

Jennifer “Jen” Hale was born on February 28, 1978, in New Orleans, United States. Her family moved to Alabama soon after her birth, where she grew up watching football with her father.  She was keen and involved in sports ever since childhood. During an interview, she once said: “I heard about the first downs and penalties before I could properly speak”. She maintained a very warm relationship with her father, who unfortunately passed away because of heart failure, a few weeks after she completed her schooling, graduating from Apple Valley High School. There is no information available about her mom so far.

Jen Hale began her journalism career as a political and investigative reporter/anchor after graduating from the university. In 2009, she was chosen as a fellow by the prestigious RIAS Commission to travel to Germany and study US-German relations, as well as the evolution of former East German cities since the fall of Communism. She covered politics and international issues for almost nine years before switching her career to sports, which she was always interested in. She initiated her sports journalist career with KNOE and she was sent to Baton Rouge as their capitol correspondent.

Hale continued to work in other sectors of news too when she was not assigned sports coverage. She got decent public exposure when she was sent over to New Orleans to cover Hurricane Katrina. She decided to stay in New Orleans for a change and got a position to host a morning show on a local channel. In the show, she would cover different themes from sports to politics and culinary, using her in-depth knowledge and presentation skills of various subject matter.

Jen Hale’s most important breakthrough occurred when her college friend asked Hale to interview former athletes and special guests to include them on the LSU track and field website. Her work was later recommended to Fox Sports and based on her talent and experience, she was called upon by FOX for a reporter position that was vacant in the sports category.  After joining the FOX News Network in 2011, she celebrated her ninth season with them in 2020 and has been an NFL reporter for the network for a long time. She works at an editor level, writing articles and covering news as well.

During her tenure at FOX Sports, she has concurrently presented for the FOX NFL, and FOX Sports Southwest. Jen Hale has covered premier players and teams for various leagues during their largest events, including the Super Bowl, All-Star Weekend, and the NBA Playoffs.

For her outstanding work in the field of journalism, she has won numerous awards, including Edward R. Murrow Award presented by The Associated Press, and an Emmy Award. She has also published books about travel and history.  When not busy with her journalism works, Jen Hale uses her time and effort to represent various charities and other local and media activities in group discussions. In 2015, she founded an organization called Sideline Pass, which trains and empowers young women through workshops and outreach activities.  Apart from that, she sits on the advisory board of Sons of Saints, an organization that supports Alzheimer’s research, and the Hearing and Speech Impairment Foundation.

Although Jen Hale is a health-conscious person, she was diagnosed with dilated cardiomyopathy, at the age of 38. This condition caused her heart to pump blood inefficiently throughout her body. Her symptoms started appearing in the summer of 2016 when she revealed that she often felt tired and short of breath, and initially ignored these symptoms because she thought it was due to her hectic work schedule. Upon medical examination, she was advised to quit her job for at least six months and was put on a waiting list for a heart transplant. Jen Hale being committed to her work disagreed to take a sabbatical.

Learn about Kayce Smith a beautiful sportscaster who beat cancer

She kept working but cut back her hours. In addition, she started wearing a life support vest to work every day, which had a heart monitor that would alarm her if her heart rate was slowing and in case of emergencies, shock her heart into beating properly. She continued this for six months, wearing the vest under her shirt and covering the NFL, NBA, and college games across the country. The medication and her exercise patterns worked and her heart was starting to get back to normal. After two years she was finally removed from the transplant list.

Jen Hale has maintained a very strict personal life record and doesn’t reveal much about her to the public. There is no indication anywhere about her romantic life so far. We do not know if there was a boyfriend in her life at some point, but for now, all we know is, Hale puts her career on top of everything. She has proven that time and again, especially after her heart condition. She is the kind of person who always thrives for more success and achievements and that is what motivates her into being such a great reporter.

In her free time, Jen Hale likes to spend her time with her niece D’Vazny who she loves a lot. Hale has given priority to her family like the family had always done to her, when she was growing up. She spends holidays with her cousins and likes to travel with them when she has the time. Jen Hale currently lives in a 500 square foot condominium in French Quarter, New Orleans. She bought the place back in 2006 when she went to New Orleans to cover Hurricane Katrina and fell in love with the place.

Net Worth of Jennifer Hale

Jen Hale has been a successful journalist for the better part of the decade. She worked hard for her achievements and truly deserves the position she is in today. It is estimated that she earns about $45 thousand as her yearly salary from FOX and has a net worth of somewhere about $1 million. We know for a fact that she has given a lot back to charity and the community, which makes it clear that Jen Hale is not just about the money. She is a person of virtue who knows what is important. We are sure she will go on to make more progress in her wealth as she progresses her amazing career for years to come.

Jen Hale is a popular figure on social media. Thousands of people follow her on various platforms to keep up with her shows, updates, and personal life as well. She currently has about 47 thousand followers on Twitter. An additional 44 thousand people follow her Instagram account where she posts pictures from her work, personal life, milestones, and vacations.