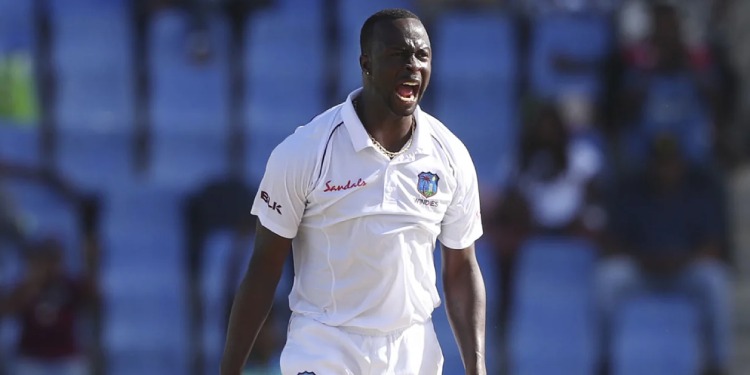 Kemar Andre Jamal Roach, known as Kemar roach, is a fast bowler for West Indies. Roach is a Barbadian international cricketer and a right-handed batsman & a right-arm fast bowler featured in the 2006 U-19 Cricket World Cup in Sri Lanka. Roach can bowl at 150 kilometers per hour (93 mph). On 3 January 2015, he was named the 7th fastest active bowler.

Born on 30 June 1988, Roach hails from Saint Lucy, Barbados. Roach holds Barbadian Nationality and follows the Christian religion. However, Roach has kept his family details a secret. As a result, not much is known except the news of his father’s passing not too long ago.

On where he went for education is also unknown. In conclusion, not much is known about his early life.

The Barbadian Cricketer stands at the height of 5 ft 8 in (173cm/1.73m) tall and weighs 75 kg (165lbs). Since Kemar Roach is a cricketer, he is an athlete who constantly trains his body. Roach body measurements have not been revealed. Kemar has dark brown eyes and black hair.

You may also want to know more about Kyle Coetzer

In the early years, he already picked cricketing as his life career. Roach had played only four first-class matches before the West Indies selected him for a Test match. Then, in June 2008, he had his big break. Kemar Roach made his international debut in a T20I game against Australia. Roach’s fast bowling forced Ricky Ponting to retire hurt after hitting him on the elbow with a pacy 146kph delivery. Ultimately, the West Indies took the win by seven wickets.

In the same year, Roach made his ODI debut against Bermuda. He recorded 10–1–29–2 in West Indies, prevailing by six wickets. The following year, Roach made his Test debut against Bangladesh. Although Bangladesh prevailed, his performance unsettled the batsman. Roach took ten wickets at an average of 16.20 and was the leading wicket-taker from the series. Roach hit his maiden five-wicket haul in one-day matches in the first ODIs. On the 2010 IPL auction, Roach was one of the most sought out players. The Deccan Chargers bought him for $720,000. In the 2010 season, he played only two matches for the Chargers.

A tour to Sri Lanka in 2010/11 changed his career. The pitch wasn’t suited for fast bowlers, but Roach was the leading wicket-taker in the series. Roach took ten wickets at an average of 24.50 and ultimately became the Man of the Series. In the 50-over World Cup hosted by Bangladesh, India, and Sri Lanka, Roach became the sixth bowler to get a hat-trick in the world cup.

In 2012, Roach played a Test match against Australia. Roach became the first bowler to take ten wickets for the West Indies since Corey Collymore in 2005. However, the West Indies lost to 2-0. The West Indies toured England in June 2012. Throughout the series, Roach struggled with no-balls. Roach was out of the team for the tour of India following a shoulder injury.

On tour to New Zealand, Roach got in a car accident but escaped with minor injuries. In August 2014, he made a comeback for the Test. His first game turned out rusty, but he was back to his best in the second. During a Test against South Africa, he got injured. Roach made his comeback for the 2015 World Cup but only played three games. Since then, he hasn’t played any ODI games. Roach received a contract across all formats in October 2018. The West Indies named him for the 2019 Cricket World Cup.

Kemar Roach leads a private life, has not shared his relationship status with the public. Even in the past, there was no rumor of him dating anyone. One word about him already being married, but it is not confirmed.

Kemar Roach is active on social media. Roach is available on Instagram and garnered 12.5k followers with just 21 posts. Roach shares his life events games and with his friends.

You may also want to know more about Sikandar Raza Butt

The Cricketer from Saint Lucy, Barbados, has played cricket for years. Roach’s source of income comes from his profession as a cricketer. According to cricketerlife.com, his estimated net worth is approximately $1 Million as 2021.