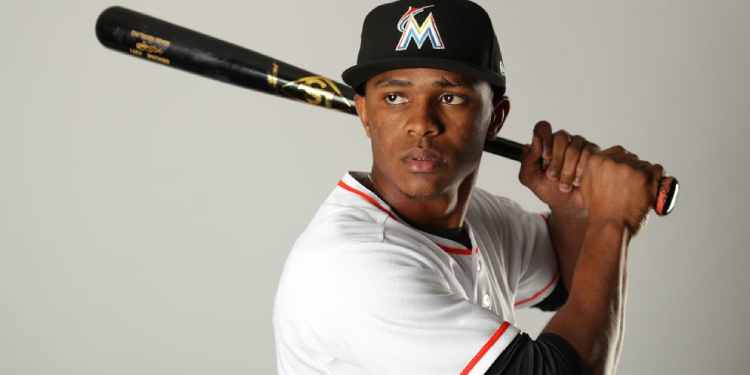 After hitting.386 with a.939 on-base plus slugging percentage in 2014, he was named the Cardinals Minor League Player of the Year.

Magneuris Sierra was born in San Cristobal, Dominican Republic, on April 7, 1996. He is one of Edita Sanchez Guzman’s three children with her spouse, Massimino Sierra. His father moved the family to Spain in quest of a job. Magneuris has two brothers named Estarling and Osiris.

Magnerius is an average-built man standing at 5 feet 11 inches or 1.80 m tall and weighing 73 kg or 161 lbs. Likewise, Sierra has black hair, and the color of his eyes is also black.

That’s right; you read that correctly. Magneuris has a daughter, whom he is quite proud of. Sierra and Kewyn J. Iriarte walked down the aisle at Sierra’s wedding in 2018. Before their marriage, they had been dating for a while.

The baseball player announced his nuptials on his Instagram account. In addition, Magneuris Sierra announced in October 2018 that he was expecting a kid on his social media account.

Sierra and Kewyn had their first child in November 2018. He is a frequent user of social media and frequently posts images of his daughter and wife.

Magneuris Sierra has been playing baseball since she was a child. He was a member of the baseball team in high school. Magneuris declared for the 2012 MLB draft shortly after graduating from high school.

Magneuris was signed as an international free agent by the St. Louis Cardinals. In 2013, he made his professional debut for the Dominican Summer League.

Magneuris was a member of the Gulf Coast Cardinals in 2014. He was voted the Cardinals Minor League Player of the Year at the end of the season after hitting.386 with two home runs and a.939 OPS.

After the season in 2016, the Cardinals added him to their 40-man roster to keep him out of the Rule 5 Draft.

Sierra played in the Class A-Advanced Florida State League the following season for the Palm Beach Cardinals. Magneuris was dealt with the Miami Marlins in late 2017 as the Cardinals’ seventh-best prospect heading into the 2018 season.

Magneuris made his debut in 2018 and spent most of the season with the team. He spent the entire 2019 season in the Minor Leagues.