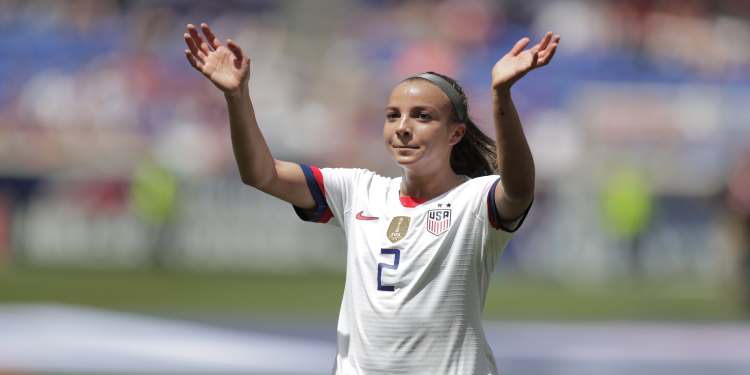 Mallory Pugh is an American football player who is playing in a forward position. She is currently playing for the Chicago Red Stars of the NWSL (National Women’s Soccer League). Previously, Mallory played for the Washington Spirit and Sky Blue FC.

Likewise, Pugh is not only recognized just because of her performance and skills but also gained fame because of her boyfriend Dansby Swanson. He is a professional American baseball player who is currently playing under the Atlanta Braves of MLB (Major League Baseball).

Similarly, Mallory is honored by several individuals and international awards because of her playing skills. There are lots of things that many people are unaware of Pugh and her personal life.

So, today we will talk about Mallory Pugh’s early life, age, career, relationship with Dansby Swanson, net worth, and active social media accounts.

Mallory Pugh was born on April 29, 1998, in Littleton, Colorado, United States. Her full name is Mallory Diane Pugh which was later shortened after removing the middle name. Likewise, she is 5 ft 4 in (1.63m) tall in height and holds an American nationality.

Besides, Mallory is the daughter of Horace Pugh (Father) who was a track and football player whereas her mother Karen Pugh was a long-distance runner.

Pugh grew up with her older sister named Brianna in Highlands Ranch, Colorado. She was a reason that Pugh was motivated to play soccer at such a young age at four. While following the footsteps of her sister, Pugh joined the Real Colorado club and participates in the Elite Club National League.

At that time, she played with her team in a U-11 soccer tournament. After her first successful game, she later competes at the U-18 level although she was just qualified for the U-5 level.

While staying with the Real Colorado club, Mallory manages to bring several trophies home in the Elite Clubs National League in 2010 and 2011.

Other than this, Mallory attend the Mountain Vista High School located in Highland Ranch, Colorado in 2012. At that time, she was also a member of her high school soccer team and played almost three seasons altogether.

After graduation in 2016, she continues to aim to be a professional soccer player rather than attending the University for her college degree.

Mallory Pugh started her soccer career in childhood. She played U-5, U11, U18 tournaments, and other several games under the Real Colorado club.

After graduating from high school, Pugh joined the Portland Thorns FC club for the National Women’s Soccer League in 2016. She was the youngest player ever to debut in the National team after Heather O’Reilly.

It was the beautiful beginning of her professional career where she played a spectacular game in all seasons. In Fact, Mallory was listed for the top 18 players to be selected for the 2016 Summer Olympics in Rio de Janeiro, Brazil.

Similarly, Pugh never looked back and continue her focus on her career as a pro soccer player. So, in 2017, she joined the Washington Spirit in a game against FC Kansas City. At that time, she scored 6 goals in the game and was recognized as NWSL Rookie of the year.

Moreover, Pugh also represent the United States at the FIFA Women’s World Cup tournament in the same year 2019 when she was 21 years old. She was considered 2nd youngest player since Tierna Davidson to compete in the World Cup.

Besides, Mallory stayed in WS till 2019 and after that joined Sky Blue FC on January 16, 2020. She played her first game for the club against Washington Spirit and wins by 2-1.

After leaving the SBFC, she is currently playing for Chicago Red Stars which she ahs joined back in December 2020.

Mallory Pugh is in a relationship with Dansby Swanson who is a professional baseball player. The couple met back in 2017 through Jace Peterson who is Pugh’s brother-in-law and the Dansby former teammate.

Mallory Pugh is a successful soccer player who has earned good fortune in her career. So, her net worth is estimated at more than $2 million.

Mallory Pugh is quite active on her social media accounts. She has over 562k followers on her Instagram account on where you can usually see pictures of her attending game and personal life.