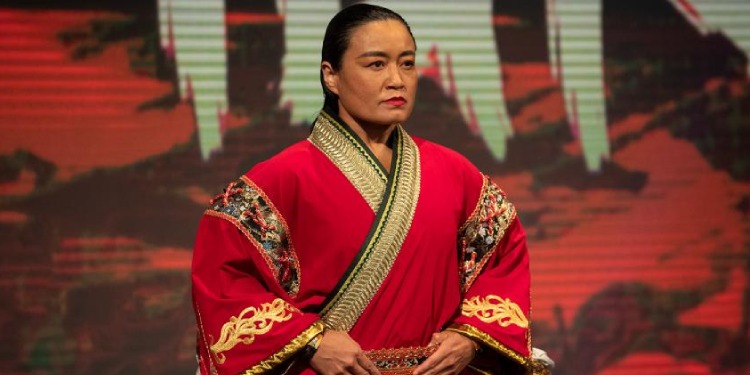 Born on November 17, 1979, the wrestler is 42 years old. A native of Japan, she holds Japanese nationality and Asian ethnic background. She grew up in Niigata, Japan. However, the details of her family background are yet to be disclosed.

Satomura took up wrestling from an early age. Although not specific, some sources claim her father and grandfather to be wrestlers. From an early age, Satomura showed interest in sports. At age 3, she started learning judo and won the prefectural competition in her junior high school.

Meiko Satomura began her professional career on April 15, 1995. At age 15, she debuted for all-female promotion Gaea Japan against Sonoko Kato. Satomura prevailed. On November 2, 1996, Satomura teamed up with Sonoko Kato to become the inaugural AAAW Tag Team Champions. Satomura and Kato defeated Sugar Sato and Chikayo Nagashima. She won the same title two times with Ayako Hamada, and Chikayo Nagashima. Satomura went on a winning streak by prevailing as the AAAW Singles Champion twice, finally losing the streak to Aja Kong on April 3, 2005. On April 10, Satomura defeated her trainer Chigusa Nagayo in the main event.

Through the connection of Gaea Japan with WCW, Satomura appeared for the World Championship Wrestling (WCW) in 1996. The WCW was attempting to establish a women’s division. In an eight-woman tournament for the inaugural WCW Women’s World Championship, Satomura got eliminated in the first round. Again, Satomura entered the match after the WCW introduced a second title for the women. She lost again. Eventually, the relationship between the two promotions ended.

In May 2012, Satomura debuted in Chikara. Later that year, she participated in the group’s premier tournament King of Trios. She won the King of Trios tournament with Cassandra Miyagi and Dash Chisako in 2016. On July 27, 2018, Satomura made her debut in WWE. Meiko competed in the second Mae Young Classic tournament. Before losing to Toni Storm in the semi-finals, she beat three wrestlers.

Satomura officially signed to WWE on October 27, 2020. WWE reported she would be on-air talent and coach for NXT UK. On February 11, 2021, she defeated Isla Dawn on her first in-ring debut at NXT UK. After that, a feud started between Satomura and NXT UK Women’s Champion Kay Lee Ray. On their first encounter, Ray beat Satomura but soon lost to Satomura on June 10, ending a 649-day reign. Satomura officially became the first Japanese wrestler to hold the NXT UK Women’s Championship. She has successfully defended her title against Amale and Stevie Turner.

Meiko Satomura is in a relationship with Minoru Suzuki. Furthermore, information regarding her personal and love life has remained confidential. However, she has been dating Minoru Suzuki for more than one year.

Suzuki is also a Japanese professional wrestler and mixed martial artist. In June 2021, a rumor spread that Suzuki was moving to the UK to live with Satomura.

The Japanese wrestler has been in the industry for two decades. Over the years, she has accumulated a good income. Her primary source of income is a professional wrestler and other sources – bonuses, incentives, and PPV earnings. Her net worth estimated in 2018 is $200,000.

For full biography about your favorite Wrestlers, please check out Sportscovering.