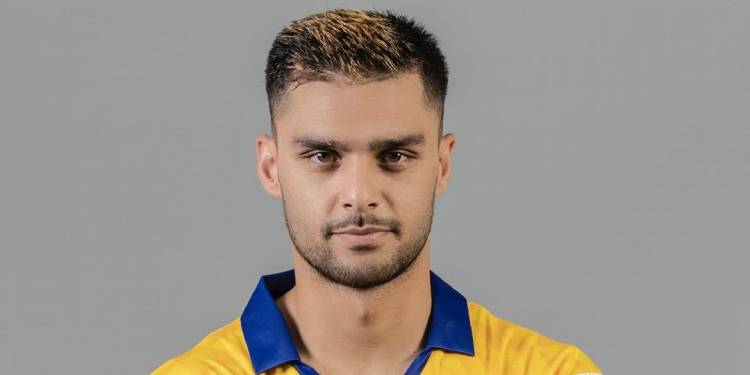 Naveen has not shared any details regarding his early life. He has also kept his family details confidential from the public. So it is clear that he is a very secretive person.

His academic qualifications are also kept away from the public eye.

The Afghan cricketer stands at 6 feet 1 inch (186 cm/1.86m) and weighs 69 kg. The young Athlete has dark brown eyes and black hair. He has maintained a fine athletic body with 40 inches chest, 31 inches waist, and 14 inches biceps.

Naveen ul Haq started his domestic career after his international debut. On 7 March 2018, he played for the Kabul Region and made his first-class debut in the 2018 Ahmad Shah Abdali 4-day Tournament. Naveen didn’t take long to be named in Nangarhar’s squad. In September, Naveen got his chance in the first edition of the Afghanistan Premier League tournament.

Next year, he played in the 2019–20 Bangladesh Premier League for the Sylhet Thunder. His performances gave him opportunities frequently. In July 2020, the Guyana Amazon Warriors squad named him for the 2020 Caribbean Premier League.

In October 2020, following a draft, the Kandy Tuskers drafted Naveen for the inaugural edition of the Lanka Premier League. In early 2021, the Leicestershire Foxes signed him before the 2021 T20 Blast tournament in England and resigned him for the 2022 summer in England.

Naveen ul Haq made his international debut in an ODI format on 25 September 2016. In his first ODI match, he went against Bangladesh. Before his debut, The 22-year-old cricketer represented Afghanistan’s squad for the 2016 Under-19 Cricket World Cup.

At the end of 2016, he captained Afghanistan in the 2016 Under-19 Asia Cup. Naveen’s next year started with his Twenty20 debut in the 2017 Desert T20 Challenge. Representing Afghanistan, he played against Namibia on 19 January 2017.

In the December of 2017, Afghanistan’s squad again named Naven captain for the 2018 Under-19 Cricket World Cup. In addition, he was named for the 2019–20 Bangladesh Tri-Nation Series in Afghanistan’s T20I (Twenty20 International) in August 2019.

His last played ODI was on 26 January 2021 against Ireland. On 21 September 2019, the young cricketer represented Afghanistan and made his T20I debut against Bangladesh. In September 2021, he was named in Afghanistan’s squad for the 2021 ICC Men’s T20 World Cup. His last recorded T20I was on 7 November 2021 against New Zealand.

The cricketer is still at a young age and certainly has a bright future ahead of him with all things in mind.

Naveen ul Haq is a somewhat secretive individual. Regarding his relationship status, he has not shared it with the public. Naveen has kept his love life far from the public eye, even in his socials.

Naveen has just begun his career, and it shows that he wants to focus on that rather than being in a relationship. Since there is no information about his personal life, he is presumably single.

In addition, he shares his lifestyle games and with his friends. Naveen goes by @imnaveenulhaq on Twitter and @naveen_ul_haq on Instagram.

In 2016, made his international debut. The 22-year-old found his shot early. Since 2016, Naveen has played domestic and international matches and has made decent money.

Unlike most athletes who receive sponsorships and endorsements, Naveen ul Haq has not been in any sponsorships or brand.
Naveen’s source of income comes from his profession as a cricketer. He has a net worth estimated at around $1 Million.

For full biography about your favorite cricketer, please check out Sportscovering.