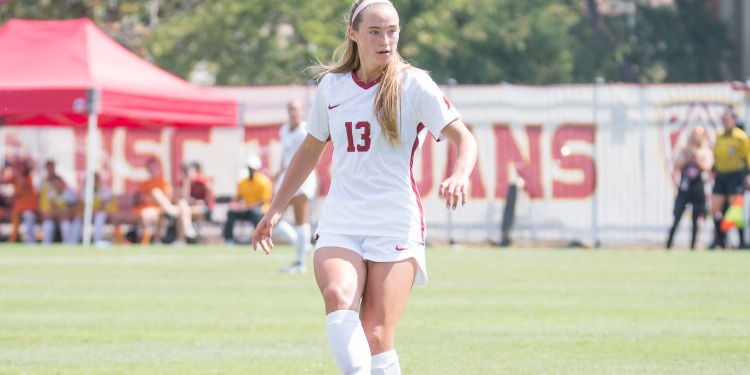 Tara McKeown is a professional  American soccer player who is currently signed to the Washington Spirit of (NWSL) National Women’s Soccer League as a forward. McKeown finished her collegiate career playing for USC Trojans  (2017-2021) and was drafted by the Washington Spirit.

A native of Newbury Park, California, Tara Leana McKeown was born on 2nd July 1999 under Cancer’s star sign. McKeown is the daughter of Tracy and Conor McKeown and has three siblings: Kaitlyn and Shaylee and one brother Ryan. The twenty-year-old holds an American nationality and belongs to white ethnic background. She stands 5 ft. 7 in (170 cm).

McKeown joined USC Trojans for her college career after graduation from Newbury Park HS. As a freshman, McKeown appeared in all 20 games for the Trojans, 13 as a starter on McKeown way to four goals, and a team-high five assists. Also, McKeown was honored as a member of the Pac-12 All-Freshman team. McKeown saw action in all but one game the following season, making 21 appearances and 20 stars. McKeown was named to the All Pac-12 third team.

As a junior in 2019, McKeown played in 21 games, starting 20 to lead the team to an NCAA Quarterfinals appearance. Tara was one of 4 Trojans to start all 14 matches as a senior. Following eight goals and a team-high eight assists for the Trojans, she was named the All-Pac-12 first team and All-Pacific Region first team.

In the 2021 NWSL Draft, Tara was picked by the Washington Spirit. On 26th September 2021, Tara scored her first goal for the Spirit in a game vs. Kansas City in a 2-1 win.

Looking at her stats, it seems it hasn’t been an excellent year for McKeown. In the year 2021, she has played 23 matches in which she could only score one goal and assist in two plans. But the good part is that she hasn’t received any red or yellow cards during her games. Talking about her 2020 stats, she has gp of 14 and pts/g 1.71. We hope she will keep on improving her stats in the upcoming days.

There is no report on Tara’s love life. McKeown is in the spotlight due to her rising NWSL career, and everyone is going crazy about whether this beautiful soccer player is single or not. But McKeown has not dropped a shiny about her relationship status. McKeown is active on Instagram with 9,043 followers. But, she said, she would like to visit Bora Bora and Paris someday.

Tara has just started her football career. He is currently signed to NWSL’s Washington Spirit. However, there is no information about the final details between the groups. According to the source, the minimum wage for a player for the 2021 NWSL season is $ 22,000, while the maximum salary for a player is $ 52,500, 10% and 5% increase, respectively, from last season. From 2021, Tara McKeown’s total value is reviewed. She will certainly continue to add numbers in the future.

She is an active social media user. McKeown is very busy on her Instagram, where she has around 141 posts and 9k followers. In addition, she shares her training and her casual pictures very often. She is also available on Twitter, where she has about 1.2k followers, and she is active with her tweets. We hope to see her being more involved in her social media in the future.