Tracy Cortez is a professional American mixed martial artist who has competed in Flyweight UFC (Ultimate Fighting Championships). She has over 10 professional matches on where she wins 9 matches (1 by knockout, 1 by submission, and 7 by decision) and losses 1 (by Submission).

She fights for the Neuro Force One and Fights Ready MMA. The player is trained by Santino Defranco who is also a pro-MMA fighter. Cortez leans all the skills and techniques from her trainer so that she can be the best champion of all time.

Cortez grew up with her 3 brothers (Jose Cortez, Abraham Cortez, and J.R Cortez). All the siblings love each other from the beginning and they all grew up in a family of Mexican immigrants.

When Cortez was 14 years old, she first started her MMA training. She is inspired by her older brother Jose Cortez who is a pro-MMA fighter. He fought against the former UFC veteran Drew Fickett in November 2008 and won the match by split decision. 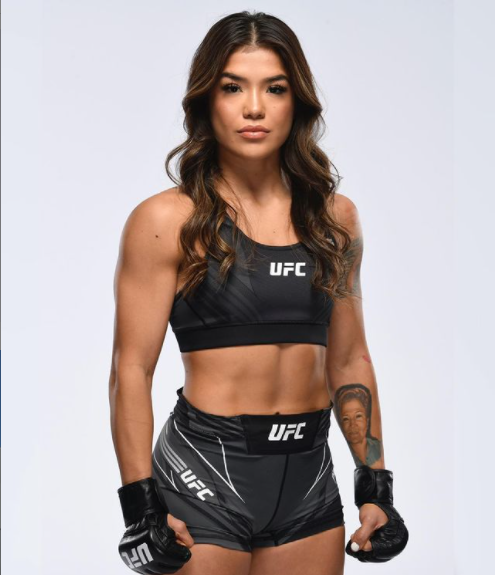 However, Jose discontinues the MMA after his last match because he was having a cardiovascular problem. He was later on diagnosed with germ cell cancer and died in 2011. Cortez was in depression because of her brother’s death but still, she manages to lift herself up with the help of her family and Henry Cejudo. She, later on, got a tattoo of her brother (Jose) on her arm to remember him as the best and strong fighter.

Tracy Cortez started her professional fighting career by debuting in 2017 Invicta FC 25: Kunitskaya vs Paaluhi. She fights against Cheri Muraski but lost the match with submission in round 2. Following the same year, she again participates in the World Fighting Federation 36 and wins the fight against Roxanne Ceasear by unanimous decision.

Cortez first competes in the UFC fight Night: Blachowicz vs Jacare in November 2019 held in Sao Paulo and wins the match against Vanessa Melo by unanimous decision. There was an issue regarding the weight after the match because of the measuring scale. But, later on, Cortez was able to win the match.

After her first UF fight, she again participates in 2020 UF Fight Night: Moraes vs Sandhagen and wins the match against Stephanie Egger by unanimous decision.

On April 17, 2021, Cortez once again competed in UF on ESPN: Whittaker vs Gastelum and wins the match against Justine Kish by split decision. Later on, she was scheduled against JJ Aldrich in UFC on ESPN 30 but she didn’t take it apart because of her injury and was later on replaced by Vanessa Demopoulos.

Tracy Cortez didn’t show her personal relationship to the public till now, So, we can assume that she is single and focusing on her fighting career.

Tracy Cortez is a successful fighter in the world. Her net worth is estimated at around $400,000 dollars according to various internal sources like Forbs.

For full biography about your favorite MMA fighter, please check out Sportscovering.