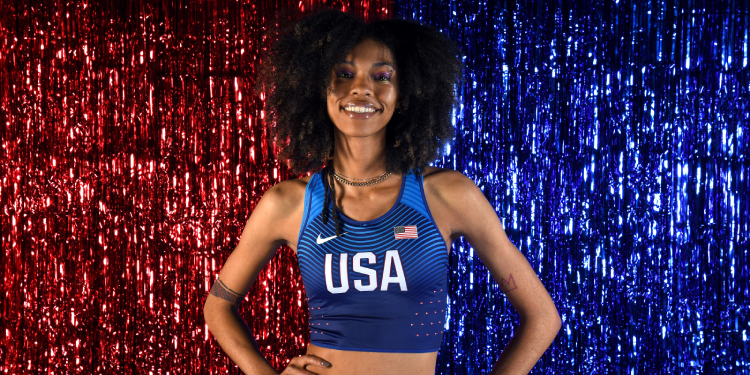 Vashti Cunningham is an American popular track and field athlete. She is a one-time World Champions in 2019 Doha and two times World Indoor Champions in (2016 Portland and 2018 Birmingham) and one time Pan American Junior Championships in 2015 Edmonton. All of those wins Cunningham made on the High jump.

Vashti is the daughter of Randall Cunningham who is a retired famous National Football League (NFL). In addition, she is also a niece of Sam Cunningham who played in the NFL for 10 seasons and got retired. Similarly, her mother’s name is Felicity de Jager Cunningham who is a former ballerina back in the Dance Theatre of Harlem.

Cunningham grew up with his three brothers (Randal Cunningham II, Grace Cunningham, and Christian Cunningham) and a sister (Sofia Cunningham). All of the five siblings are lovable and always support each other.

Cunningham went to Bishop Gorman High School located in Las Vegas, Nevada. There she also participates in junior and local track and field competitions. She was quite good while she’s studying in her high school.

Vashti Cunningham has been the best track and field (high jump) athlete when she was in high school. During that time, she participates in the 2015 Mt. SAC Relays located in Walnut, California. She jumped 1.94 and was able to set a new national high school record at just the age of 17. Based on the World Youth Mark her jump can be considered as No. 4 and No. 3 mark in the whole world. Besides, she manages to print her name as a USATF (USA Track & Field) of the week because of her performance.

Following the same year, Cunningham once again participates in the U.S Junior National Championship and won the event. Similarly, she also competes in the 2015 Pan American Junior Championships in Edmonton, Alberta, and secures the 1st position in the high jump with 1.96m.

Her professional career started when she signed with Nike in 2016. After that, she jumped for the 2016 USA Indoor Track and Field Championships held in Portland, Oregon, and set a new world junior record after winning the event.

Similarly, Cunningham competed in the 2016, Rio Olympic game in a high jump scoring 1.88m. Unfortunately, she didn’t win the Olympics but managed to secure 13th position.

Vashti Cunningham participates in 5 USA indoor Track and Field Championships from 2016 to 2020. During her game, she manages to come 1st in all of the events in a high jump. More, she also joined 3 USA outdoor track and field Championship and again she secured 1st position on all events.

Cunningham recently competed in the 2021 US Olympic trials held in Eugene Oregon and she came 1st in a high jump height of 1.96m.

Vashti Cunningham is currently in a relationship with her boyfriend Bennet Higgins.

Vashti Cunningham is a successful track and field athlete whose net worth is estimated around $1 million to $2 million according to various internal sources.

For full biography about your favorite athlete player, please check out Sportscovering.