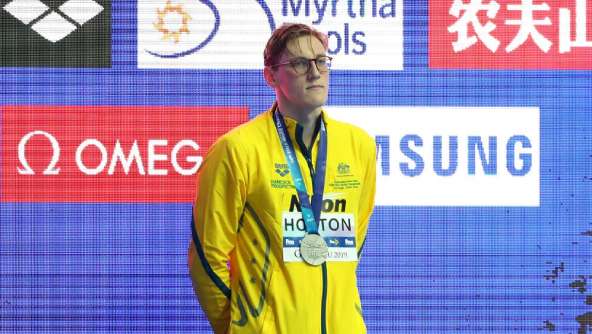 Mack Horton is an Australian professional freestyle swimmer. He has earned a gold medal in the 2016 Summer Rio Olympic makes him the first-ever swimmer from Victoria state to win such a precious title in history. Similarly, he has also title as World Champion and Commonwealth champion.

The success behind the Horton career is all from his hard work, dedication, speed, and skills in swimming. He manages to keep his fame in every corner on the swimming event or tournament.

Mack Horton was born on April 25, 1996, in Melbourne, Victoria, Australia. He is the son of Andrew Horton (Father) and Cheryl Horton (Mother). Besides, he grew up with his one brother Chad Horton in a lovely family together.

Horton went to the Caufield Grammar School from 2004 till 2004. During his school days, he used to practice swimming so that he can improve his skills day by day.

Mack Horton first started his swimming career by participating in the 2012 Junior Pan Pacific Swimming Championships held in Honolulu. His performance was excellent during the game so he manages to win the gold medal in 1500m freestyle with a time of 15:10.07.

After two months, he again competed in the 2012 World Cup held in Singapore and wins the title on a 1500m freestyle event.

In 2013, it was a hectic year for Horton because he has to be ready for the upcoming Olympic festival. So, he put his all effort and dedication into swimming for months and then participates in the 2013 Australian Youth Olympic Festival and picked a gold medal in 1500m freestyle.

Similarly, Horton also competed in the 2013 World Junior Championships held in Dubai. The overall event was remarkable for Horton because he picked 5 gold medals and a silver medal during the event.

When you put effort into your work then it will definitely pay you off in the future. Saying that Horton was qualified for the 2014 Australian Swimming Championships because of his previous work and skills in swimming. At that time, he again wins a 1500m freestyle event but was left behind by David Mckeon in a 400m freestyle event.

In the same year 2014 in Commonwealth Games, Horton was the silver medalist in 1500m freestyle with a record time of 14:48.76. Following that, he again participates in Pan Pacific Swimming Championships held in Gold Coast, Australia, and picked a silver medal which was in the 800m freestyle event.

The Olympic title was a great thing for Horton because participating in the Olympics was his dream from the beginning. So, he fulfills his dream and competed in the 2016 Summer Olympics representing Australia. The overall event was excellent for Horton so that he manages to win a gold medal in the 400m freestyle event. Similarly, he also secures 4th position along with his teammates in the 4x200m freestyle relay.

After that, Horton again competed in the 2020 Tokyo Olympic game in Men’s 4x200m freestyle relay. Unfortunately, he didn’t manage to reach the final and missed out on the chance to win the title.

Mack Horton is currently in a relationship with his longtime girlfriend Ella Walter. The loving couple met during secondary school so you can assume there is a strong and deep love between these two couples.

Mack Horton is a well-known swimmer in the world. He has earned good fortune in his swimming career. His net worth is estimated around at $5 million according to various internal sources.

For full biography about your favorite freestyle swimmer, please check out Sportscovering.