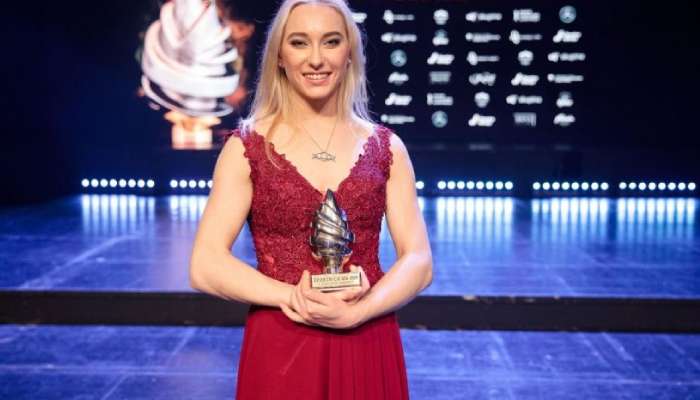 Garnbret is also the winner of the 2017 European Championships on where has won the gold medal in combined tactics. Her determination towards the game makes her a successful and greatest athlete in the world of all time right now.

Janja Garnbret was born in March 12, 1999 in Slovenj Gradec, Slovenia. Her height is 5 ft 5 in (1.64m) tall. She is the proud daughter of Vili Garnbret (Father) and Darja Garnbret (Mother). Both of the parents of Janja support the career she chooses as a rock climber.

Garnbret started her first climbing when she was 7 years old. She used to practice climbing with her passion and determination so that she can fulfill her dream.

When Garnbret turns 8 years old, she first participates in a National competition to test her rock climbing level and how much she needs to improve more.

Later on, she competed in the 2013 Youth European Championships when she was 13 years old and won the event in both lead and bouldering.

Garnbret later started to join in other more tournaments and events.

In 2015, Garnbret is qualified for the IFSC Climbing World Cup on where she came in 7th position on lead climbing. In the same year, she again participates in the Swedish bouldering game and secures 1st place by defeating Shauna Coxsey.

Janja first participates in Climbing World Cup in 2016 on where she won the event by placing 1st in lead. Similarly, she has also won the climbing world championships as a senior and youth in lead.

In the year 2017, she again competes in European Championships as a senior and wins the gold medal in lead. Garnbret later again won the climbing world cup following the same year in both lead and combined.

After back to back win, Garnbret joined the World Championships back in 2018 on where she wins the gold medal on both Bouldering and combined. In addition, she also wins the climbing world cup in lead and combined following the same year.

Moreover, when Garnbret turns 19 then she again participates in climbing world championships and picked a gold medal in both lead and bouldering by winning each and every event in all seasons. She made history in climbing events after achieving such a win throughout the season.

Garnbret is setting a record in the history of climbing over and over again from 2015 till 2021. After so many wins over gold and silver medal, Garnbret decided to participate in the 2020 Tokyo Olympics.

The game was stopped in 2020 but continued in 2021 because of the pandemic. After competing in the 2020 Olympics she secures her 1st position in Women’s combined climbing and wins the gold medal. At that time, she made history to become the first woman ever to win a gold medalist in climbing.

Janja Garnbret is in a relationship with her long-term boyfriend Skofic. He is also a Slovenian climber was the 2016 world cup champion in lead.

Janja Garnbret is a successful climber in the world. She has earned a huge fortune in her climbing career. Her estimated net worth is around $1 million to $5 million according to various internal sources.

Besides, she also earns a good amount by partnering with famous brands like Addidas, Triglav, Camp, Rhio, and more.

Janja Garnbret also has an active personal website “janja-garnbret.com.” So, you can visit her site and check her overall won medals, personal life pictures, and more.

For Full Biography about your Favorite Athlete Player, please check out Sportscovering.