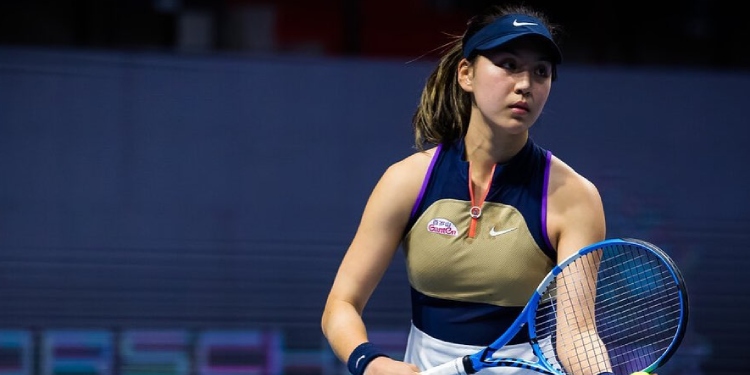 Wang Xinyu is a professional tennis player from China. She trained with a few Serbian players abroad, thanks to Slović. Xinyu is now training at the Shenzhen Sports Centre’s Tennis & Badminton Centre.

Xinyu debuted in the top 100 after making the 2021 Upper Austria Ladies Linz quarter-finals at World No. 99 in the year-end rankings.

On 26 September 2001, Wang Xinyu was born in Shenzhen, Guangdong. She is currently 20 years of age and has a zodiac sign of Libra. She is 6 feet 0 inches tall and weighs 58 kg.

Her father Peng is a former head coach of the Shenzhen tennis team and the Chinese women’s national tennis team but resigned from the latter to focus on his daughter’s tennis career.

Her mother was also an athlete and used to play basketball for the Zhejiang women’s team. However, her mother’s identity is not mentioned at present. Nevertheless, both of them have committed themselves to accompany Xinyu around.

Xinyu has shown great longing for tennis from early childhood and was trained by Peng. She began playing appropriately at the age of five.

Wang Xinyu booked her ticket to a Grand Slam debut in Zhuhai’s 2018 Australian Open on 3 December 2017 by winning the Asia-Pacific Wildcard playoff. In the final, she had a comeback win against Papua New Guinean No. 1, Abigail Tere-Apisah.

Abigail was only two points away from victory when leading 5–3, 30–0 in the second set. When the momentum turned, Abigail wanted to become the first player from Papua New Guinea to contest in a Grand Slam main draw.

However, Xinyu demonstrated fearlessness for her age and won the next seven points before leveling the match.

Xinyu ultimately won the game in three sets, seizing the most vital break with a superb backhand passing shot in the ninth game, and then closed out the final set after keeping four breakpoints.

“It’s probably the most important day in my life so far,” Xinyu expressed in the post-match news conference to CCTV Sports Channel, the official TV broadcaster of the Australian Open in China. At 16, she is the most youthful Chinese athlete to make a Grand Slam main draw.

In 2018, at her first-ever junior Grand Slam championship in the Australian Open, she was the second-youngest competitor in the main draw after 15-year-old Marta Kostyuk. Unfortunately, she lost her debut Grand Slam match versus Alizé Cornet in straight sets.

But after making it to the junior girls’ doubles final with her Taiwanese partner Liang En-Shuo, Xinyu beat Violet Apisah of Papua New Guinea (Abigail Tere- Apisah’s niece) and a New Zealand-born Swiss player of Chinese origin, Lulu Sun, in a close match.

She advanced to her first WTA Tour-level final at the Jiangxi Open in the doubles event in September 2019. Along with Zhu Lin, Xinyu vanquished fellow Chinese Peng Shuai and Zhang Shuai.

Xinyu debuted in the top 100 after making the 2021 Upper Austria Ladies Linz quarter-finals at World No. 99 in the year-end rankings on 15 November 2021. Unfortunately, she was defeated by Alison Riske, the defending champion.

Xinyu won her first grand slam match of the year against Ann Li. After that, however, the world no. 2 Aryna Sabalenka defeated her in the second round of the tournament of, the 2022 Australian Open.

Perhaps, Xinyu is dating someone special to her or could be single. Nevertheless, she didn’t reveal her relationship status yet. On the other hand, she is a professional athlete who usually appears to be busy training hard for her tennis career. Therefore, if she ever makes her partner public, the common people will know him.

As per our analysis, the average net worth of a professional tennis player is between $8 million to $10 million. However, Xinyu is a young talent, and tennis is her principal source of income. As a result, she may be earning a higher salary based on her performance.

Follow Xinyu to enjoy her posts concerning her game and the daily activities with her family and colleagues in her free time.