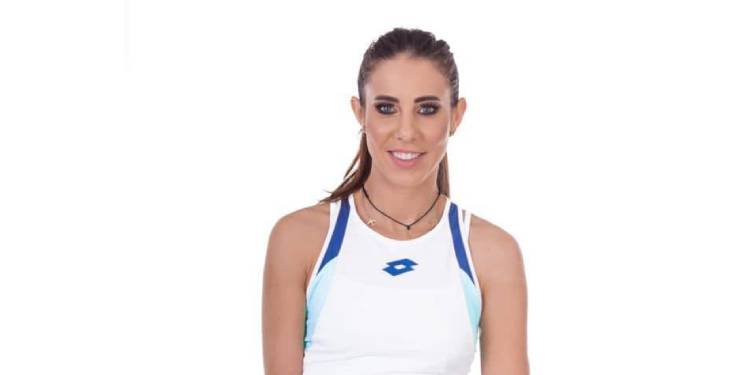 Mihaela Buzarnescu is a famous professional Romanian tennis player who currently plays globally for the IFA and WTA events. Her career took off in 2004, and she has been playing for sixteen years since.

Buzarnescu has ranked No. 20 on singles and No. 24 on doubles and has won two doubles and one singles title on the WTA tour.

Buzarnescu attended the National University of Physical Education and Sport and graduated with a Ph.D. She is 33 years old as of 2021. Before rising to fame, she was like any other average person. Also, regarding her early life, very little is known. However, she was coached by Artemon Apostu-Efremov and her father, Mihai Buzarnescu.

Mihaela Buzarnescu started her professional career as a tennis player in 2004. In the 2006 US Open, she won the junior doubles title with Raluca Olara. In the finals, the pair defeated the top-seeded team of Sharon Fichman and Anastasia Pavlyuchenkova.

Although Buzarnescu started her career in 2004, a shoulder and knee injury forced her career to a long break. However, she went back to school during her time off and attained a Ph.D. in 2016.

After her break, Buzarnescu returned to tennis in October 2017 and got to the semifinals of the Linz Open. The following year, she reached the finals in Hobart and Prague. Unfortunately, she surrendered a lead in the singles semifinals, eventually losing the match in three sets. However, Buzarnescu played more consistently in the doubles. She rose to fame after winning the tournament and her first WTA title with Raluca Olaru.

After her win, Buzarnescu played her first French Open and defeated Vania King in the first round, securing her first Grand Slam win. Buzarnescu followed with a win in straight sets against Rebecca Peterson and the No. 4 seed Elina Svitolina in the third round.

Mihaela Buzarnescu’s streak was ended when she faced Madison Keys, the No.13 seed, in the fourth round. After that, she reached the quarterfinals of the nature valley Open in the grass-court season, eventually losing to Naomi Osaka. After that, Buzarnescu paired with Heather Watson in the doubles and lost in the finals.

Mihaela Buzarnescu again defeated No. 2 seed Svitolina and later lost to eventual champion Petra Kvitova in the semifinals. In her third consecutive week in Eastbourne, she lost to Jelena Ostapenko after reaching the last 16. Although she kept losing in the singles, she reached the finals in doubles with Irina-Camelia Begu.

In August, Buzarnescu won against Maria Sakkari in a straight-set, securing her first WTA Tour singles title. The same month, she again played against Elina Svitolina in the second round of the Rogers Cup; however, she was forced to retire for two months after a severe ankle injury. She ranked No.20 and ended the year ranked 24.

The 2019 season for Buzarnescu began at Brisbane International, where she lost to Lesia Tsurenko. Then, in February, she went against the Czech Republic, representing Romania. In the end, Romania won the match 3-2; however, host to Karolina Pliskova and Katerina Siniakova. Her career after the severe injury has been rather rough, but her willpower is yet to die out.

Mihaela Buzarnescu is a relatively private person. She has yet to reveal her personal and love life. Though she is an active social media user, any information regarding her love life is unknown.

Hence, as of 2021, Buzarnescu is presumably single.

According to online sources, Buzarnescu has an estimated net worth of over $2 Million.

Mihaela Buzarnescu is an active social media user. She is on Instagram as @miki.buzarnescu with 47k followers and @MikiBuzarnescu on Twitter with 9.6k followers. Buzarnescu was previously active on Instagram; however, her Instagram link is currently broken, and the reason is still unknown.

For full biography about your favorite tennis players, please check out Sportscovering.