We can see people engaging in some unique profession in adulthood. This involvement is different from childhood activities. Some children are very much introverted and self-centered. But with time, the sound of speech they might have saved for over the years can find a medium to express itself. The unspoken energy expresses through some other channels. It is common in the case of human habits.

Similarly, Baker Mayfield is a famous football player who seems to concentrate his introverted behavior on sports. All the energy that he had saved during his childhood seems to be expressing nowadays in his games.” The Cleveland Browns” selected him in the “2018 Draft,” becomes the part of the “Texas Tech Red Raiders” and “Oklahoma” too.

The birthplace of Baker is Austin, Texas. He came into the world on 14th April 1995. Baker is the youngest of the two sons of the couple.

His father had to face financial problems during his high school days. He used to consult in private equity. The problem resulted in selling their house and live in several rented houses. Baker spent his childhood in Oklahoma and participated in several games. His father also used to play football. He represented the “University of Houston” for three years.

Baker attended Lake Travis High School. He was even part of the “Cavaliers Football Team.” Baker represented his team in two seasons with a record of 25-2. The team even won the “2011 4A State Championship” with Baker securing eight interceptions, 6,255 passing yards, and 67 touchdowns. This was his record till the competition of his high school.

Baker started during his college days in the 2013 season. He performed well in the “Texas Tech.” Baker Mayfield even created a new record with a 43 in a total of 60 attempts in his school. He also holds the title of “Big 12 Conference Offensive Player of the Week.” He was also one of the top semifinalists for the “Burlsworth Trophy” during November. He even received the title of “Big 12 Conference Freshman Offensive Player of the Year” in the 2013 season.

Then, Baker got a transfer to “University of Oklahoma” in January 2014. Baker Mayfield got the transfer due to some scholarship issues and some prejudice. Bob Stoops, the Oklahoma Sooners head coach, confirmed Baker’s participation in February 2014 and ineligible to perform till the 2015 season. This was due to some complications during his transfer and the “Big 12 Conference” transfer rules. He performed well in the 2015, 2016, and 2017 season. 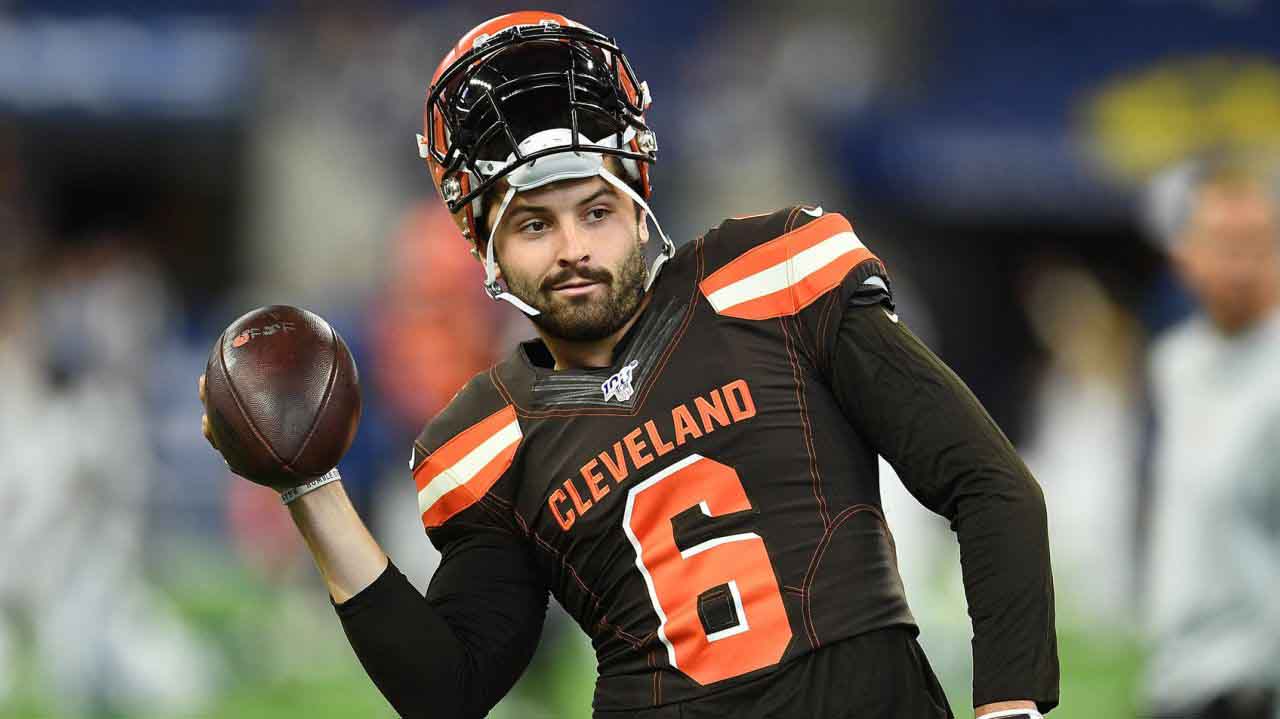 Baker officially joined the team “Cleveland Browns” after the 2018 NFL Draft. He signed a contract for the team for four years on 24th July 2018. It was a contract of $32.68 million with a guarantee of salary.

Moreover, Baker debuted in the 2018 season in the third week of “Thursday Night Football.” Baker is the first player to drop the bench in debut match after Fran Tarkenton in 1961. He even threw for more than 200 yards and was responsible for his team’s first victory in the season. Baker Mayfield got the honor of “PFWA All-Rookie” in 2018. He became the second player of the Cleveland to get the honor after Tim Couch in 1999.

Similarly, he performed impressively in the 2019 season. Baker Mayfield also held the title of “AFC Offensive Player of the Week” during his performance in the seventh week of 2020.

Baker did engagement with Emily Wilkinson in 2018. The couple married on 6th July 2019. The couple’s friends played a vital role in their relationship since 2017 and saw each other in October of that year. Baker stated that Emily was the girl whom his friend was panning for the meet for six months. Baker Mayfield proposed Emily during a final interview for a docu-series. They married in an outdoor vintage and romantic wedding in Malibu. 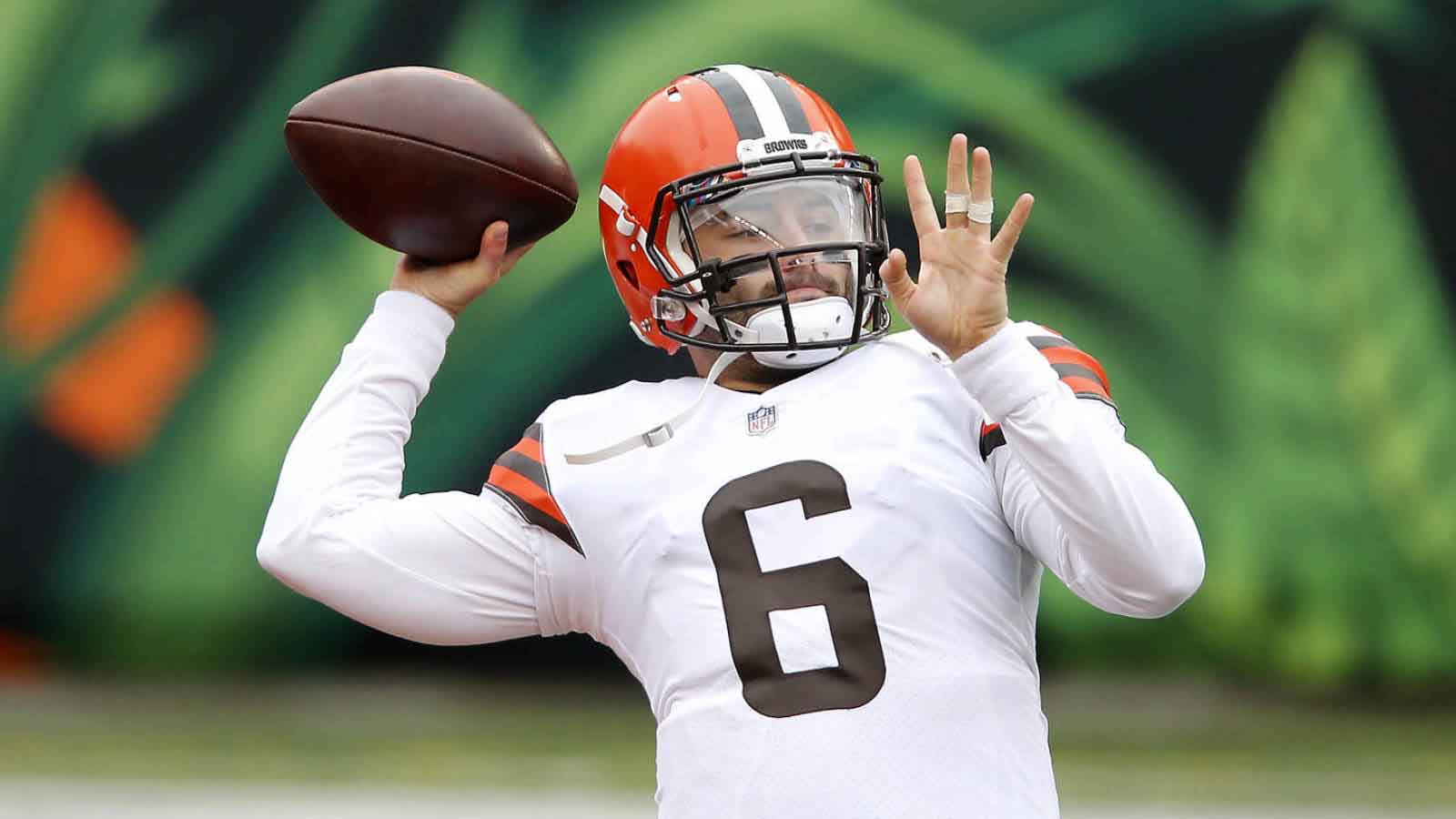 Baker is quite active on social media platforms. He goes with the name of “@bakermayfield” on Instagram with 1.6M followers and “Baker Mayfield” on Twitter with 725.5K followers. Baker posts his match photos, videos personal celebration on his Instagram. He also shares his pictures with his wife on Instagram. They really compliment each other in their real and reel life—his Facebook page “Baker Mayfield” with 89K followers.

Baker has been part of the sports fraternity for more than five years. Baker Mayfield has won several matches and broken several records. According to celebritynetworth.net, he has an approximate net worth of $12 million.

The nationality of Baker is American. His current age is 25.  He belongs to North American ethnicity. Baker has an attractive height of 6 feet with a complimentary weight of 95 kgs.