Bronson Burgoon is an American professional golf player. He became a pro in 2010 and has competed in 101 events to date. Burgoon competes in the USPGA (known as only PGA in the United States) tour and has also played in the PGA Tour Latinoamerica. He has won two major honors in his career so far.

Bronson Burgoon was born on June 2, 1987, in The Woodlands (Texas). He is among the two children born to his parents Richard Burgoon and his wife. He has an older brother named Goodwin who is also a golf player. Bronson went to The Woodlands High School and upon graduating, enrolled at Texas A&M University. He had started playing golf at an early age and also participated in competitions in college. During his time at the Texas A&M University, he played and defeated Andrew Landry, 1 up, to bring home the 2009 NCAA Championship for his University. In 2018, Bronson Burgoon was inducted into the Texas A&M Athletic Hall of Fame.

After graduating from college, he sought to develop his professional career in golf. Bronson Burgoon featured in the PGA Tour Latinoamérica in 2012 and 2013 and also qualified for the Web.com tour for the 2014 season. In 2015, after finishing 18th on the regular Web.com tour money list, he earned his spot on the PGA Tour, something that he had always dreamed of.

In his rookie season at the PGA Tour, Bronson Burgoon finished 132nd in the FedEx Cup standings which helped him retain his spot on the PGA for 2017 on conditional status. After facing an injury, he couldn’t compete for almost a year between September 2016 and July 2017 but luckily, Burgoon was granted a non-exempt medical extension, which also qualified him for the 2017 Web.com tours. In the tour finals, he earned enough points to regain full status for the 2018 season.

Bronson is one of the consistent performers of the PGA and has already got his chance to play for the Charles Schwab Challenge. Unfortunately, he could not make the cut for the recent Rocket Mortgage Classic competition held in Detroit, the USA from July 1–4 of 2021.

Burgoon’s best finishes on the PGA Tour are runner-up positions at the 2018 John Deere Classic tour, which was a huge deal for him and the CIMB Classic tour. Apart from that, he has also won the Adam Pros competition, securing the Firewheel at the Garland Classic in 2012 and the Twin Lakes Open competition. Bronson still has a long career ahead of him during which he can add more titles to his tally. 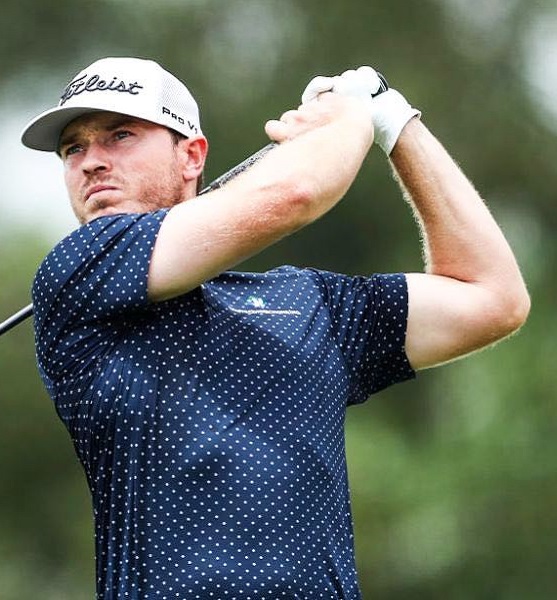 Given the reclusive world of golf that remains a part of most of the elite society of the world, Bronson Burgoon doesn’t have many fans following him from the general public. His Instagram account only has about 2,000 followers and he chooses to keep the account private, we assume it is something personal that Bronson doesn’t want everyone to be a part of. There is little evidence suggesting he has a Twitter account and apart from that he doesn’t make many public appearances or interviews connecting with his admirers.

Bronson Burgoon is a married man and is living a happy married life along with his wife and his two children. Bronson got married to his college sweetheart Katy Eudaly in April of 2016.  The couple had been dating their entire way through college, before making their relationship official. Just like Burgoon, his wife too was a sports performer in college as she was a regular in the track and fields team at the university. Burgoon is also a lover of dogs and he owns two Australian Shepherds named Briggs and Raley.

After turning professional in 2010, Bronson Burgoon has earned more than $3 million in prizes across all competitions. We can assume that his net worth could be more than that but we do not know for certain since no statements or property evaluation of his estates have been made public. Given the fact that he was born to a Texas household, he could be worth more than $3 million, but it would be best not to jump to any conclusions. Burgoon also makes money through his sponsors, endorsement deals, and advertisement deals. Last calendar year he earned a sum of $589,000 from 19 events in total made cuts in 9 other events.