Calvin Kattar is a professional MMA fighter from America. He is associated with the “Ultimate Fighting Championship” (UFC) in the category of “Featherweight.” Calvin started his professional career in 2007. He was also part of the “EliteXC.” Calvin holds the ranking of number 6 in the list of “UFC Featherweight Rankings” on 15th June 2020. 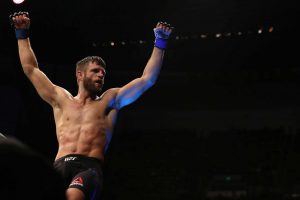 The birthplace of Calvin Kattar is Metheun, Massachusetts, the U.S. He came into the world on 26th March 1988. His father’s name is James. His mother’s name is Sandra. He grew up with three siblings. Calvin has a sister named Kylee and two brothers; Keegan and Jamison. He was active in sports at a young age.

You may want to know about Rachael Ostovich

Calvin Kattar attended t case care, he “Metheun High School.” During the time he started playing wrestling. His ranking was high and even succeeded to hold a number ranking in the “Division I MIAA State Championship” in his senior year in 2006. Calvin was in a dilemma about whether to start his MMA journey or join college. He decided to choose his MMA career. Later, he completed an associate degree at “Middlesex Community College.”

The nationality of Calvin Kattar is American. His current age is 32 years. He has an average height of 5 feet 11 inches along with a complimentary weight of 66 kgs. His nickname is “The Boston Finisher.” The ethnicity of Calvin is not clear.

When did Calvin start his career? 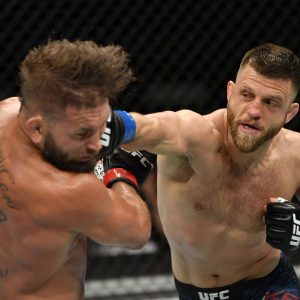 Likewise, Calvin Katter won the match against Chris Fishgold in the first round through a technical knockout on 27th October 2018. It was during the “UFC Fight Night 138.” This resulted in the signing of the contract of multiple fights with the “UFC.”

Then, Calvin  Kattar won the match against Ricardo Lamas in the first round through knockout during “UFC 238” on 8th June 2019.  During “UFC on ESPN 6”, he had to face Zabit Magomedsharipov on 18 October 2019. But Zabit suffered from an injury on 13th September. The match was shifted for the coming month at “UFC on ESPN + 21.” Calvin succeeded to win the match through a unanimous decision. He even won the “Fight of the Night” award.

Similarly, another match of Calvin Kattar against Jeremy Stephens during “UFC 249” on 18th April 2020 was also postponed. The fighters fought the match on 9th May 2020. He succeeded to win the match in the second round through a technical knockout. Calvin succeeded tp sign an agreement with the “UFC” for another six matches.

You may want to about Dan Henderson

The first match after the contract was against “Dan Ige” during “UFC on ESPN: Kattar vs. Ige” on 16th July 2020. Calvin fought the match with “UFC Featherweight Champion” Max Holloway during “UFC on ABC 1” on 16th January 2021. He suffered from a lot of also injuries due to the powerful strikes of Max.  Calvin won the match through a unanimous decision. Both the fighters succeeded to win the “Fight of the Night” award.

Calvin Kattar is active on Social media platforms like he is active inside the ring. He goes with the name of “@clavinkattar” on Instagram with 148K followers and “Calvin Katter” on Twitter with 22.9K followers. Calvin does not have a verified page on Facebook. Although, if you search his name on Facebook, you will encounter unverified pages and fan-made pages. Calvin shares glimpses of his matches, training, and relaxation time. He also shares pictures with his family and friends on Instagram.

Calvin Katter seems to be quite close with her mother. He has even shared a photo of her mother wishing her a happy birthday on 26th March 2020. Calvin had written “Happy birthday mother, thankful for all that you do! If you ever find yourself over for dinner, don’t say I didn’t warn you” His mother was happy in the photo wearing a woven glove in one hand and a book named “The Chakras” on another hand.

His latest post was of the photo of the deadly match against Max of Jan 18, 2021. Calvin had written on the caption: “Success in life comes when you simply refuse to give up. With goals so strong that obstacles, failure, and loss only act as motivation. Props to Max on a hell of a fight he deserves all the praise. Thankful for my team’s commitment to this fight. On to the next. There is no stopping the man who doesn’t quit.”

Calvin Katter had joined Twitter in December 2011. He had described himself as the “Owner of Combat Zone MMA.” His latest tweet is on January 18 of his caption on Instagram. The number of likes in the tweet is increasing and has already crossed 3.3K likes.

What is the net worth of Calvin Katter?

Calvin Katter has been active in the sports fraternity for more than three years. He has won a lot of matches and tournaments even in this short amount of time. Calvin is trying his best to make his name in the MMA fraternity. Although the exact figures of the net worth of Calvin are still not clear, according to his achievement he must have a net worth of more than $1 million. He still has a long way to go.