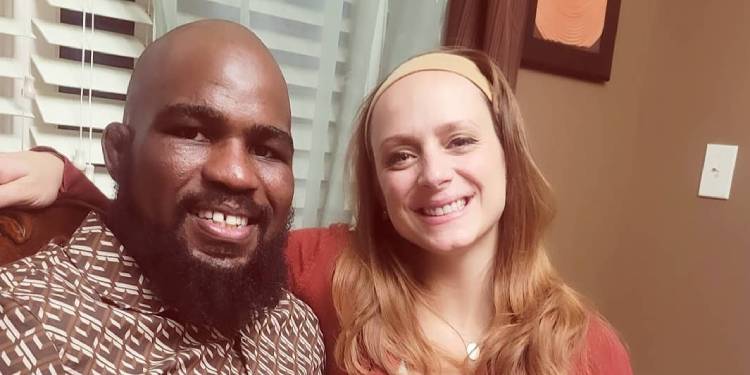 Who is Jenny D’Acquisto?

Jenny D’Acquisto is an American Mixed Martial Artist best known for being a part of the Flyweight Division. However, her fame came thanks to her relationship with the MMA Fighter Corey Anderson. Her partner is also a professional fighter who ranked #5 in the UFC Light Heavyweight Rankings.

Jenny D’Acquisto hails from Wisconsin, the United States of America; however, she has left her date of birth section empty. Due to this, we are unable to determine her age and star sign. We will update this section after we find reasonable and accurate information.

On the other hand, we know that Jenny grew up with her brother, Jacob D’Acquisto. Also, she has a pet dog named Athena. Sadly, Jenny has also left out her parents and upbringing details from her bio. From the looks of it, it seems she prefers to keep her childhood and parents’ information confidential. Similarly, her educational and academic background is unknown to the general public and media. In addition, she recently rose to fame thanks to her connection with Corey and decided to take on MMA.

Although Jenny D’Acquisto began her MMA career, she has yet to turn professional. Jenny is still in the Amateur class with a long future ahead of her. However, after Corey Anderson put a ring on her finger, Jenny left the stage and MMA. Fortunately, it seems she is resuming her training to get back in fighting form.

Till now, Jenny D’Acquisto has competed in seven matches as an amateur. Among those seven matches, Jenny has a record of 2-5-0 – two wins, five losses, and zero draws. Jenny secured two wins against MMA Fighter Rashelle Cook and Shenna Brandenburg. Unfortunately, her other matches concluded with her loss. Jenny faced and lost against Gillian Davis, Kaitlin Shepherd-Adelman, Gabriella Gulfin, Chi Sheibley, and Chelsi Westdorp.

Jenny D’Acquisto, better known as the loving wife of MMA Fighter Corey Anderson, is a married individual. Before marriage, the two had been dating for a long time. Then on February 14, 2018 (Valentine’s Day), the pair exchanged their marriage vows. Corey posted on his Twitter about their wedding and captioned,

2-14-18 the best Valentine’s of my life. Married my best friend and can’t wait to see what the future holds. I love you @jennydacquisto !! #immarried #bestfriends #married #mrandmrs #Anderson

Soon after, the pair rejoiced as they became proud parents. The pair welcomed their son, Corey Jr., on March 8, 2019. Due to Jenny becoming pregnant with Corey’s son, she left the ring for a while, only to return after some time off. Browsing through their socials, we found that the pair live a decent life and travel a lot.

Talking about her husband, Corey Anderson is a professional MMA Fighter who performs in the light heavyweight division. Corey has a career record of 16-5-1. His MMA career started against J.R Briones, winning the match via TKO. In his most recent match, Corey faced Vadim Nemkov, which concluded in a No Contest (clash of heads).

You might want to know about MMA Fighter Jasmine Jasudavicius.

Net Worth and Social Media Presence

Unfortunately, Jenny D’Acquisto does not make a huge sum like her significant other. However, some sources state her net worth is around $150,000. We will update this section following her career progress.

Similarly, her husband’s net worth is also unknown. Some reports state that her husband has an estimated $1 – $5 million net worth. It is clear that Corey does the heavy lifting in the family.

Discussing her physical stats, Jenny D’Acquisto stands at 5 ft 5 in (1.65 m/165 cm) and weighs around 56 kg (125 lbs). The blonde has a pair of dark brown eyes with an athletic build since she is an MMA Fighter. However, we have no information concerning her exact body measurements like chest size, waist size, and hip size.

For more biography about your favorite players and their wives, please stay connected with us at SportsCovering.

Who is Stephanie Bertrand? Details about Patrice Bergeron’s wife, net worth