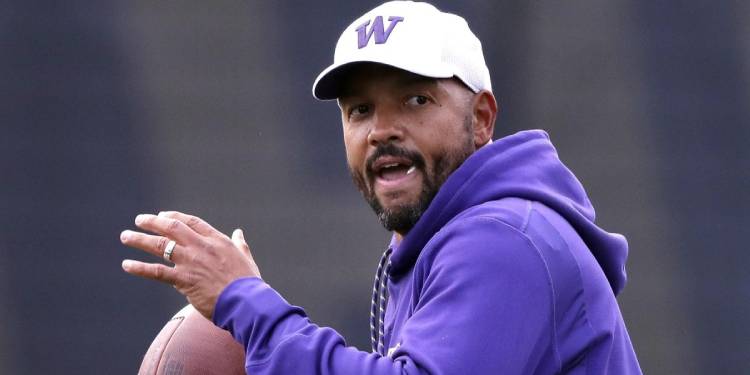 Jimmy Lake is a brilliant American football coach. He was most lately the head coach at the University of Washington from 2020 to 2021.

Everything Regarding Jimmy Lake Early Life

Lake was born on December 17, 1976, in Walnut Creek, California, and his birth name is James Paul Lake. He is presently 45 years old, and his zodiac sign is Sagittarius.

His father served in the United States Air Force, and he is a military brat. The family has resided in various places, including tours in Turkey and the Philippines.

He was a three-sport letterman for the Indians (football, basketball, and baseball) and a scholar-athlete at North Central High School in Spokane, Washington. From 1995 until 1998, Lake was a strong safety for Eastern Washington University in Cheney, Washington.

He was named the All-Big Sky Conference Academic Team and was an honorable mention All-Big Sky honoree. Lake worked as a graduate assistant at Eastern Washington during the spring after graduating in 1999, before starting a full-time position with the Spokane Indians. In this minor league baseball team, he worked in ticket sales.

Why Jimmy Lake Is Famous?

Jimmy is one of the hardworking coaches who devotes his entire attention to the team he manages. He consistently demonstrates his commitment to his job by coaching young players to play American football like professional athletes.

He always has a diligent approach toward his subject of interest, and he goes above and beyond to ensure that his team achieves success.

He was assigned to the state’s western side for the first time, and he was advanced to the Football Bowl Subdivision (then called Division I-A). Jimmy coached at Washington under defensive coordinator Phil Snow, whom Lake referred to as a “defensive back master.”

In 2004, the Huskies only won one game, prompting head coach Keith Gilbertson and his staff to be fired. He arrived at Montana State University in Bozeman, Montana, under defensive coordinator Pete Kwiatkowski and head coach Mike Kramer, who had been at Eastern Washington during Lake’s playing days.

During the 2005 season, Lake interviewed Washington before taking a position as assistant defensive backs coach for the NFL’s Tampa Bay Buccaneers, where he would work with defensive coordinator Monte Kiffin and head coach Jon Gruden.

After two years, Lake was one of several Bucs coaches hired away by head coach Rod Marinelli, a longstanding defensive line coach at Tampa Bay, to coach defensive backs with the Detroit Lions. He was reunited with Snow, who had been coaching the linebackers in Detroit for several years.

The 2008 Detroit Lions were the first NFL team to go winless since the season was expanded to 16 games, prompting Marinelli and his staff to be fired. Lake rejoined the Tampa Bay Buccaneers in 2010 and 2011 as defensive backs coach under Raheem Morris, who had taken over as head coach from Gruden in 2009.

He was raised to co-defensive coordinator in 2016. On December 2, 2019, Petersen said that he would resign as Washington’s head coach at the end of the 2019 season, and Lake was appointed to take his place. But unfortunately, he was fired from Washington after only two years.

According to Sporting News, second-year coach Jimmy Lake on Sunday appeared unavoidable after he was accused of hitting and pushing a player on the sideline and encountering allegations of another conflict with a player in 2019.

Jimmy was married to Michele a lifetime ago, and they are the parents of three children: Jimmy Jr., Faith, and Bronson.

Besides his coaching job, he is also a proud father who might be giving his kids a proper lesson of life not to give up and move forward no matter what comes in their way.

What Is Jimmy Lake Net Worth?

His estimated net worth is around $2 to $4 million, based on our research. However, his actual income is not mentioned yet by him.

Perhaps, he doesn’t prefer to uncover his profit in public. But, if Jimmy ever makes it clear, his target audience will know it.

For full biography about your favorite NFL Coach, please check out Sportscovering.