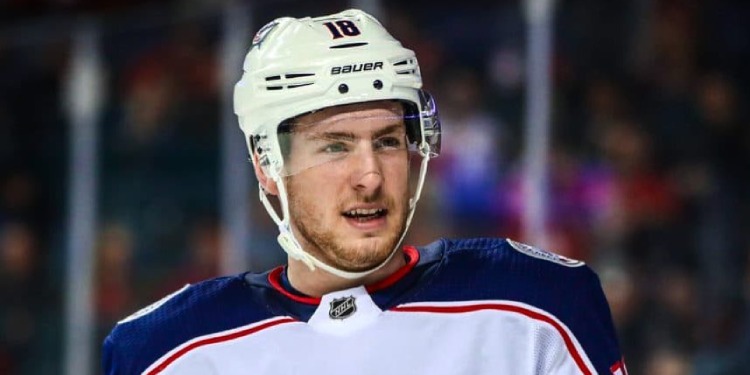 Pierre-Luc Dubois is a professional ice hockey player from Canada who plays center for the Winnipeg Jets of the National Hockey League (NHL). He previously played for Columbus Blue Jackets.

He is a fantastic two-way power forward who flourishes in high-pressure situations. He adds versatility to the team, as he can play center or winger and has excellent talent and quickness.

Pierre-Luc Dubois was born in Sainte-Agathe-des-Monts, Quebec, Canada on June 24, 1998. However, he was raised in Rimouski and is currently 23 years old. He weighs 99 kg and stands at 6 feet 3 inches regarding his physical status. Dubois has a zodiac sign of Cancer.

He is the son of a mother, Jill McClure, and a father, Eric Dubois. He also has a two-year-old sister, Daphne, studying in Quebec. His mother is from Atlanta, Georgia. Hence he is a dual citizen of Canada and the United States.

His father was also a professional ice hockey player and is now the defense coach of the Manitoba Moose, the Winnipeg Jets’ American Hockey League (AHL) affiliate.

Pierre-Luc Dubois started to play hockey at three in Germany, where his father played in the Deutsche Eishockey Liga (DEL). He was a member of the Rimouski Océanic minor ice hockey team in the 2010 and 2011 Quebec International Pee-Wee Hockey Tournaments.

Dubois was selected fifth overall in the first round of the 2014 Quebec Major Junior Hockey League (QMJHL) Entry Draft by the Cape Breton Screaming Eagles and started his career with the Screaming Eagles in the 2014–15 season.

He was the league’s leading 16-year-old scorer in his first season. Dubois was sold to the Blainville-Boisbriand Armada on December 11, 2016.

The Columbus Blue Jackets picked him third overall in the 2016 NHL Entry Draft on his 18th birthday, on June 24, 2016. He agreed on a three-year entry-level contract with Columbus on June 29.

In addition, a center scored the first playoff hat-trick in Blue Jackets franchise history in a 4–3 overtime victory over the Toronto Maple Leafs on August 6, 2020.

On January 23, Dubois transferred to the Winnipeg Jets in exchange for Patrik Laine and Jack Roslovic and a 2022 third-round pick.

He scored his first two goals as a Winnipeg Jet in a 4–3 overtime triumph over the Vancouver Canucks in his third game on February 21. The overtime winner came from Dubois’ second goal of the game, and they had an assist.

In accord with CBS Sports, in a 6-3 defeat to the Avalanche on February 25, Dubois had two assists, seven shots on goal, 12 PIM, and two hits. On February 27, he had two assists and contributed six shots in a 5-3 win over Arizona.

Dubois was a late addition to Canada’s roster for the 2019 IIHF World Championship on May 10, 2019, after the Blue Jackets were eliminated in the second round of the 2019 Stanley Cup playoffs.

On May 26, he assisted Canada through the playoff stages before falling in the final against Finland, resulting in a silver medal. Dubois scored three goals and had seven points in eight games to finish the tournament.

Dubois is posed with a beautiful lady, surely his partner, based on his Instagram posts. However, he didn’t mention her name in those posts. He also hasn’t made clear that she is his wife or just a girlfriend.

Nevertheless, his target audience will be aware of her once he makes her identity and other things public.

Dubois’s actual earnings are presently unknown. However, according to our calculation, his estimated net worth is between $3 million and $5 million.

Also, he is a fantastic athlete, so that he could make a substantial sum depending on his performance.

At the same time, he has 136 posts, 65.3k followers, and 446 followings on Instagram under the name @duber18. Follow him on both to see the updates on his game and life.

For full biography about your favorite Ice Hockey Player, please check out Sportscovering.